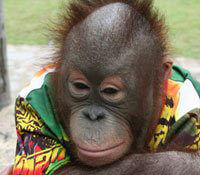 Chimpanzees, bears, tigers, elephants, and other animals aren’t actors, spectacles to imprison and gawk at, or circus clowns. Yet thousands of these animals are forced to perform silly, confusing tricks under the threat of physical punishment; are carted around the country in cramped and stuffy boxcars or semi-truck trailers; are kept chained or caged in barren, boring, and filthy enclosures; and are separated from their families and friends—all for the sake of human “entertainment.” Many of these animals even pay with their lives.

Animals are used extensively in the entertainment industry, including in circuses; zoos and pseudo-sanctuaries; marine parks; the exotic “pet” trade; advertisements, television shows, and movies; cruel “sports” such as bullfighting, rodeo events, and horse racing; and more. Businesses that exploit animals exist to make money, so the animals’ needs are usually put last.

Bears, elephants, tigers, and other animals used in circuses do not voluntarily ride bicycles, stand on their heads, balance on balls, or jump through rings of fire. To force them to perform these confusing and physically demanding tricks, trainers use bullhooks, whips, tight collars, muzzles, electric prods, and other painful tools of the trade. When they’re not performing, elephants are often kept shackled by two legs, and lions, tigers, bears, primates, and other animals are forced to eat, sleep, and relieve themselves in tiny cages.

Zoos, which sentence intelligent, social animals to lives in cages for our fleeting distraction and amusement, aren’t much better. Extremely bored, depressed, and deprived of everything that is natural and important to them, many animals in zoos literally lose their minds—a condition called “zoochosis.” Animals with zoochosis engage in neurotic behaviors such as pacing, spinning, and bobbing their heads. They also mutilate themselves, become overly aggressive, throw feces, and engage in other abnormal behaviors that are not seen in the wild.

Animals used in rodeos, horse racing, dog-sled racing, and other cruel “sports” are forced to run for their lives. When they aren’t being used in competitions, they are usually kept chained or in cages or stalls. Those who don’t “make the cut” are often casually discarded by being sent to slaughter or are destroyed.

PETA is determined to get animals out of the entertainment business forever. Learn how animals suffer under the big top, at zoos, and on camera, and find out how you can help put an end to this cruel industry.