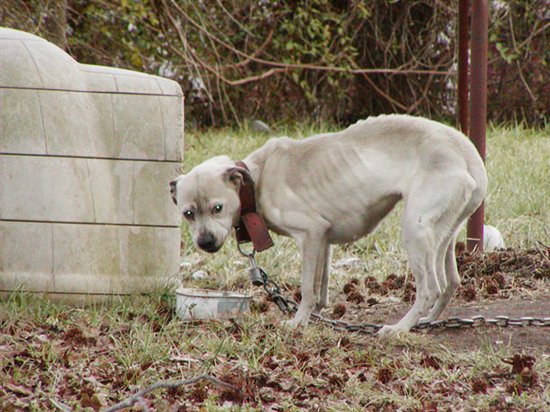 In addition to having their social needs ignored, many chained dogs are deprived of proper food, water, shelter, and veterinary care. These animals’ miserable so-called lives have prompted anti-tethering legislation in some areas.

For example, a month after the city of Fairhope’s animal control officer rescued a chained dog “so starved his ribs were clearly visible,” the Fairhope Courier of Alabama wrote the following in an editorial:

“City officials are currently … exploring the possibility of enacting a total ban on dog chaining within the city limits. … We hope our city fathers take swift action in this regard. This surely is one safety issue that needs little if any debate, not to mention a humane issue that should require no negotiation. A new ordinance would be best for all our citizens as well as all our pets.”

After the remains of Michelle Wilson’s chained dog were found in her Burleigh, New Jersey, back yard in January 2004, activists in Cape May County convinced at least six towns and cities to pass anti-tethering ordinances.

Chained dogs—like all animals who are left outside and unsupervised—are also susceptible to the cruel acts of passersby. Chained dogs are tortured, poisoned, shot, stabbed, stolen, used to “bait” fighting dogs, sold into the abject misery of life in a laboratory, set on fire, and abused in countless other ways. Others freeze to death during cold snaps after being ignored by heartless owners for years.

This is just a partial listing of the horrific fates suffered every day by chained dogs across the country.