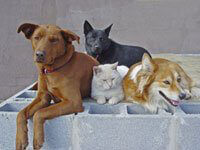 While some lucky animal companions are treated as members of the family (as they should be!), many others experience nothing but suffering, abuse, and sadness. Some forms of abuse and neglect of animals are illegal, but in many states, animals have no legal protection from “standard” practices such as being chained to a post all day and night; having their toes, ears, or tails cut off for human convenience or preference; or being forced to wear collars that deliver painful shocks in response to perfectly normal behavior such as barking.

Chaining dogs, while unfortunately legal in most areas, is one of the cruelest punishments imaginable for social animals who need and deserve companionship, exercise, and mental stimulation. It can also turn dogs into ticking time bombs: Many people, especially children, have been bitten, mauled, or killed by chained dogs. Similarly, keeping dogs in crates or cages prevents them from satisfying all their needs and is just a way for guardians to ignore and warehouse their dogs until they get around to taking care of them properly.

Birds don’t belong in cages, either. Bored, lonely, denied the opportunity to fly or stretch their wings, and deprived of companionship, many birds become neurotic—pulling out their own feathers, bobbing their heads incessantly, and repeatedly pecking at the bars of their cages.

Declawing, another cruel practice performed only for the convenience of the cat’s owner, is a painful mutilation that involves 10 individual amputations—not of the nails but of the ends of the toes themselves (bone and all). The long-term effects of declawing include skin and bladder problems and the gradual weakening of cats’ legs, shoulders, and back muscles. Declawing is both painful and traumatic, and it has been outlawed in Germany and other parts of Europe as a form of cruelty.

Cruel, unnecessary surgeries that are performed on dogs, including ear-cropping, tail-docking, and debarking, are so painful and traumatic to dogs that they are banned in many countries, but they remain legal in the U.S.

“Training” devices such as shock collars, electric fences, and prong collars rely on painful punishment and negative reinforcement, causing dogs to live in fear of being electrocuted or choked for normal behavior such as crossing invisible lines, barking, jumping onto surfaces within their own homes, and pulling on the leash during walks.

Hoarding of animals exists in virtually every community. Formerly referred to as “collectors” and regarded as well-intentioned people who were overwhelmed by the animal overpopulation crisis, hoarders are now seen in a very different light. New information has shown that the problem is far more serious than having too big a heart. The consequences for hoarders, their human dependents, animals, and the community are extremely serious—and often fatal for animals.

We owe it to our animal companions to make their lives as comfortable and fulfilling as possible. Read on to find out more about these cruel practices, how you can protect animals from them, and what humane methods are available to help you live in harmony with your animal companion.