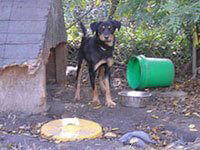 While many chained dogs’ lives have been transformed and saved by the caring actions of concerned people, working with elected representatives to pass ordinances that ban or restrict tethering is the most effective way to help chained dogs.

Chaining ordinances protect both dogs and the public welfare. According to the Centers for Disease Control and Prevention, “[S]trategies to encourage responsible pet ownership and reduce dog bites include … legislation.”

While many cities and counties have addressed this cruel and dangerous practice in an effort to prevent tragedies from striking near home, others consider such legislation only after chained dogs maul local children.

Calls for change were heard after the April 2005 death of a 4-year-old Virginia boy who approached his family’s chained dog. Three days after the child died, the editors of The Free Lance-Star of Fredericksburg, Virginia, wrote, “Localities should seriously consider outlawing the tethering of dogs. After all, if chaining is both (1) cruel to the dog and (2) dangerous to human passersby, why countenance it?”

Following five days of public debate about the issue, an editorial in the same newspaper read, “Chaining dogs is cruel and dangerous. … ‘Dogs are members of the family, not lawn ornaments or furry alarm systems,’ states PETA. Localities should reinforce that truth by banning the chaining of dogs.”

Make your community a safer place for both dogs and humans. Read the laws that have been passed by other communities, see what officials in those communities are saying about their laws, and get started on changing your area for the better!

Please also print this booklet, which discusses the need for tethering ordinances. The text is not copyrighted, and you are encouraged to use it however you wish, including in letters to the editor of your newspaper in response to stories about neglected dogs or dog attacks and in correspondence with your local officials about passing laws in your hometown.