If you were isolated for months on end, what would you do with your seemingly endless time?

Basketball star Enes Kanter used his solo downtime in the 2020 NBA bubble—the isolation zone in Orlando, Florida, where NBA players stayed to protect themselves from COVID-19 to close out the season—to learn about factory farming. Once he saw the inherent violence and devastating impact that the meat, egg, and dairy industries have on animals, the environment, and their workers, he knew that going vegan was the only option.

I remember [the] first time we are in this NBA bubble. … I had a lot of downtime. And I started to learn about factory farming, and the more I read and the more I watched and learned and educated myself, my heart was just shattering.

The Swiss-born Turkish center is known on the court for his rebounds, which are powered by his nearly 7-foot frame. Off the court, Kanter is known for speaking up against injustice, making PETA a natural fit for the vocal activist. Speaking of fit, we created a custom lettuce suit for the towering athlete, which we featured in a series of three stunning ads encouraging the world to go vegan in 2021 and beyond. 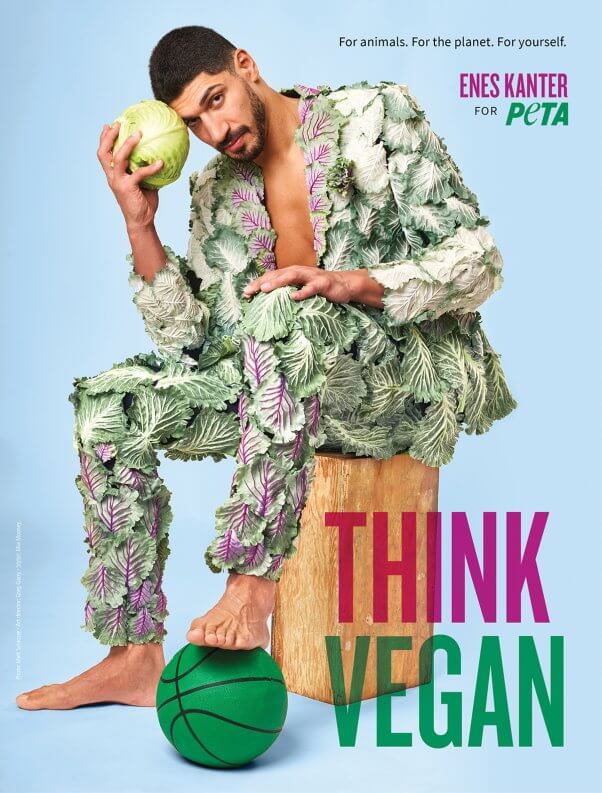 In his exclusive PETA interview, Kanter talks about wanting to inspire younger generations to be vegan and encourages viewers to get active in their local communities. He also debunks claims that meat can make you “stronger” or “faster.” Documentaries such as The Game Changers, which focuses on the achievements of vegan athletes, show that eating animal flesh can actually have a negative impact on athletic performance.

You know, we always thought eating more meat is gonna make us stronger, gonna make us faster, leaner. And everything I learned was wrong. That was the first time I decided we need change, and change cannot wait.

Data show that over 99% of animals farmed in the U.S. live on massive factories. Globally, that figure is likely over 90%. That’s billions of animals—mainly cows, chickens, and pigs—who, despite having the capacity to feel pain, fear, joy, and grief, are forced to live a severely restricted, horror-filled existence in order to satiate humans’ appetite for flesh. The exploitation of animals has led not only to a terrifying climate crisis but also to the current pandemic, in which over 1.7 million people so far have died of COVID-19 worldwide. The virus may have originated in a “wet market,” but conditions on factory farms also create a “perfect-storm environment” for the spread of similar diseases.

Humans must stop treating other animals like objects put on the planet for our use. Follow Kanter’s lead and pledge to go vegan—in 2021 and beyond.