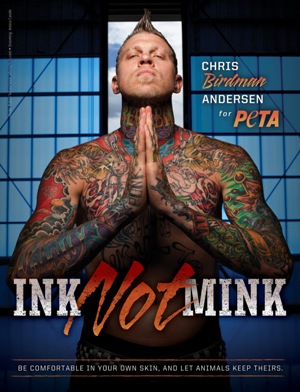 Chris “The Birdman” Andersen is one of the NBA’s most tatted-up players—and he’s putting his body art to work for a good cause. Chris and his extensive tattoo collection star in an ad for PETA’s iconic “Ink, Not Mink” campaign encouraging others to show off their own skin and let animals keep theirs. See another version of The Birdman’s ad for PETA here!

Each year, millions of foxes, minks, coyotes, rabbits, and even dogs and cats are bludgeoned to death, electrocuted, strangled, or skinned alive—all in the name of fashion. Chris explains, “These animals aren’t dying in a good way. … Animals, they don’t deserve to be beaten or slaughtered [for fur].”

Andersen’s ability to jump and to seemingly fly across the court, dunking over his opponents and blocking their shots, earned him his “Birdman” nickname. The freedom of movement that Andersen enjoys on the court is in stark contrast to the cramped, filthy conditions endured by animals on fur farms. Crammed into severely crowded cages, animals on fur farms are unable to take more than a few steps in any direction and are denied everything that is natural and important to them. Many animals go insane under these conditions, and some turn to self-mutilation out of anguish and even cannibalize their cagemates.

Watch this exclusive behind-the-scenes video from Chris “The Birdman” Andersen’s “Ink, Not Mink” photo shoot to learn more about why he refuses to wear fur. Andersen autographed the PETA T-shirt that he’s wearing in the video and at his photo shoot—and we’re giving it away to one lucky winner who enters below!

For every coat, collar, cuff, or piece of trim made from real fur, animals were trapped in the wild or kept in cages their whole lives, only to suffer agonizing deaths. Chris urges his fans never to buy or wear fur and shares this important message: “Be aware of what was really going on behind the scenes, and tell your friends and your family members what’s really going on and not to purchase fur.”