Being vegan as an athlete isn’t just doable—it’s the best way to succeed, and hundreds of professional competitors prove it. From surfers to NFL players, NBA players, extreme athletes, and everyone in between, these athletes demonstrate that you don’t need meat to compete. Take a look:

Nicknamed “Killa,” mixed martial artist Abel Trujillo has been vegan for years. “Not only is eating an animal energetically bad for raising the Kundalini aka being in your higher-self, but also spiritually and physically,” he told Raise Vegan magazine. The competitor says that he loves to eat sweet potatoes pre-competition, because they provide the complex carbohydrates and energy needed for fight night.

“I never thought it was possible I could be playing at an elite level as a professional athlete with a plant-based diet,” PETA campaign star Alex Morgan told USA Today. “Then I realized it wasn’t detrimental at all. What I learned growing up wasn’t all that true.” Morgan, who took home the 2019 FIFA Women’s World Cup trophy in July, told Reuters she initially went vegan “because it didn’t feel fair to have a dog [she adores], and yet eat meat all the time,” referring to her adopted pup, Blue. During the World Cup, the U.S. Women’s National Team’s chef, Teren Green, prepared special vegan meals for Morgan, which she says makes her “stronger and helps with fatigue and recovery.” Clearly, living vegan is working for the U.S. women’s soccer star.

“As a vegan athlete, it’s my mission to break stereotypes and be an example for others on how to build a healthy, lean, and muscular body while sustaining a plant based diet,” says Amber Sperling, a bodybuilder, bikini competitor, fitness fanatic, cross fitter, and green belt in karate.

“I had this moment with one of the livestock on my grandma and grandpas farm and connecting to the livestock at a deeper [level] … and then having to disconnect when dinner was served that night,” said professional wrestler and Food Fight author Austin Aries.

“Believe in something, even if it means sacrificing everything,” former NFL quarterback Colin Kaepernick is now famous for stating. He made the decision to go vegan for ethical reasons and says that he feels healthier for it.

The person who holds the women’s world record for the longest abdominal plank is … vegan athlete Dana Glowacka. Her meat- and dairy-free lifestyle helped her achieve her toned physique and hold a plank position for a whopping four hours and 20 minutes at the First International Plank Training Conference.

A plant-based lifestyle isn’t always an easy adjustment, but it damn sure is worth it! Haven’t looked back since the day I started. https://t.co/SlyTljzPYx

Watched the documentary "WHAT THE HEALTH" on Netflix. So eye opening!!!! Must watch

Vegan runner Fiona Oakes had one exhausting world tour when she ran marathons on all seven continents and at the North Pole (yes, that North Pole), where she set a new course record by 44 minutes.

“Being vegan isn’t hard, especially because I live in L.A. during the summer and there are a lot of vegan restaurants and options there,” said Los Angeles Lakers center JaVale McGee.

Vegan Ironman Jason Lester and his pal Rich Roll (keep scrolling) completed five Ironman-distance triathlons on five islands of Hawaii in less than a week, something that had never been done before. It spawned the creation of Lester’s EPIC5 Challenge, in which world-class athletes compete for charity.

Nicknamed “Tofu Joe,” Ironman athlete Joe Gambles was raised vegetarian and has never eaten meat. He’s now entirely vegan for ethical reasons. “I couldn’t get my head around why you would eat an animal. I can’t see the difference between a cow and my dog. I can’t see why you would eat one and call the other your best friend. I just have a lot of respect for animals and treating them well.”

Did you know “America’s strongest weightlifter” is totally vegan? Kendrick Farris, who has been vegan for years, smashes the “you have to eat meat to get swole” stereotype like he does squat jerks.

Very important I recently turned vegan .. meat is not the best thing for the body https://t.co/i1SzxPM1ro

“[M]y energy is up. My body feels amazing,” Boston Celtics point guard Kyrie Irving said about being vegan after a preseason game in October 2017. The 2011–2012 Rookie of the Year credits the documentary What the Health with persuading him to ditch meat, eggs, and dairy.

Not only is Madi Serpico a professional vegan triathlete, her partner Griff Whalen (a former NFL wide receiver) is also vegan, as are their two adopted canine companions. “I did some research and watched Forks [O]ver Knives and Earthlings and decided that I didn’t want any part of animal cruelty, not to mention putting poison in my body,” she said.

Want to hit a career high at 30 years old? Just do what Philadelphia Eagles safety Malcolm Jenkins did—go vegan. “I felt great, lost a few pounds, speeds were great, my strength was up, my recovery was really good,” Jenkins told ESPN.

Canadian figure skater Meagan Duhamel is an Olympic gold, silver, and bronze medalist, and she holds two world championship titles as well as seven Canadian national titles. But it’s her decision to go vegan (and stick up for animals in other ways) that we’re most impressed with.

Thanks to his vegan lifestyle, mixed martial artist and UFC fighter Nate Diaz delivers plant-powered punches every time he steps into a ring. He even beat former UFC featherweight and lightweight champion Conor McGregor in 2016 (following a lot of useless trash-talking on McGregor’s part).

In 2013, vegan strongman Patrik Baboumian broke the world record for the most weight ever carried by a human being, lugging 1,216 pounds across 10 meters. It’s no fluke, either: He holds multiple weightlifting world records and was named Germany’s Strongest Man in 2011.

Vegan Ironman Rich Roll and his pal Jason Lester (above) completed five Ironman-distance triathlons on five islands of Hawaii in less than a week, something that had never been done before.

Ruth Heidrich was diagnosed with stage 4 breast cancer in her 40s. With her doctor’s blessing and guidance, she refused chemotherapy, radiation, and hormone blockers and instead went vegan. Then she completed an Ironman Triathlon, becoming the first vegan to do so. Since then, she’s completed five more Ironman Triathlons in addition to a handful of marathons. She’s the epitome of what it means to be a strong vegan competitor.

Mountain ultra–trail runner Sage Canaday runs up to 150 miles a week, fueling up with only plants. “It helps keep me lean, and I’ve never had a problem with protein or any real long-term injuries from running like stress fractures or serious muscle issues,” he told Trailer Runner magazine.

Ultra-runner Scott Jurek runs races and smashes records, and he does it by eating zero animals or animal-derived foods. And as a vegan runner, he gets to eat a ton. “I’m one of these people that likes to eat. That’s the beauty of a plant-based diet; unless you’re eating junk food, you get to eat a lot,” he told Bon Appétit.

Pro surfer—and vegan—Tia Blanco’s commitment to choosing humane meals (and encouraging others to do the same) makes her a formidable ally for animals. A vegetarian from birth, she went vegan at 16 years old and never looked back.

Like Blanco, bodybuilder Torre Washington was raised vegetarian, but he went vegan in 1998 and has only seen more success since. “It wasn’t common for a vegan to be a competitive bodybuilder, but that didn’t discourage me, it rather gave me more passion to pursue my dream,” he said.

“An apple a day keeps the Dr. away! A diet filled with fruits vegetables and unprocessed foods is a must!” says highly accomplished tennis star Venus Williams. The meat-free athlete is the most decorated tennis player in Olympics history.

Los Angeles Clippers forward Wilson Chandler had one of his best seasons after going vegan a few years ago. “This is something I wanna do for my life,” he said about his kind decision. He loves the vegan options that are widely available in Los Angeles, but—according to Business Insider—his favorite restaurant is Michigan’s Detroit Vegan Soul.

At 6’9″ and roughly 250 pounds, Boston Bruins captain and vegan Zdeno Chára proves that you don’t need to eat meat to be an all-star athlete. “Everything I put in my body has a purpose,” he told the Wall Street Journal.

If Extreme Athletes Can Go Vegan, So Can You

Not vegan yet? What are you waiting for? Joining your favorite athlete in choosing compassion over cruelty has never been more doable. It’s easy to find animal-free pre-workout fuel, bulk-friendly snacks, and protein-packed foods—and eating vegan is the winning formula for competitive athletes and everyday gymgoers alike. Let your plant-based power shine with this vibrant new tee from the PETA Shop. Click below to discover just how simple going vegan can be:

Order a FREE Vegan Starter Kit With Recipes and Tips 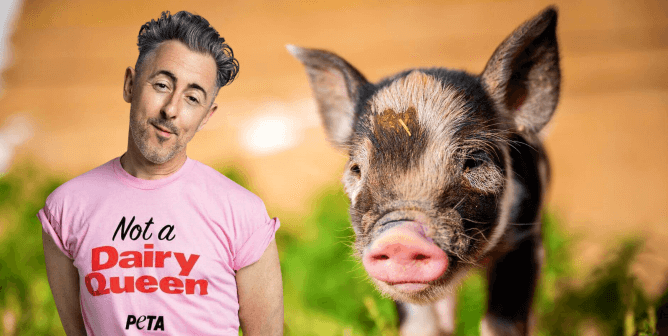