You better watch out … you better not make animals cry, because PETA is coming to town to call out some major companies that exploit animals for experimentation, food, fashion, and entertainment. Check out these 11 companies that are getting coal this year and what you can do to help get them off PETA’s naughty list:

Air France is the only major airline getting coal this year, because it continues to transport monkeys to laboratories for cruel, deadly experiments. These tests fail to produce reliable results relevant to humans, and cramming monkeys into cramped crates for extended periods can cause stress-related illnesses. Once the monkeys Air France transports arrive at laboratories, experimenters imprison, torment, and kill many of them. 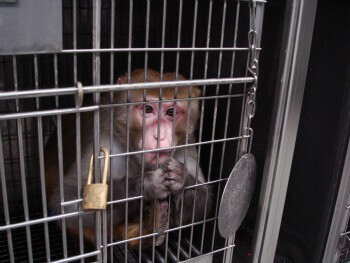 Stop air france from shipping monkeys to their deaths!

Next stop on the animal rights express? Millennium Hotels and Resorts. The company continues to sponsor the deadly Iditarod dog race, despite knowing that dogs suffer when sled drivers—known as “mushers”—force them to run through blinding snowstorms in subzero temperatures across grueling Alaskan terrain. More than 150 dogs have died during the Iditarod, which doesn’t even include many others who died during the off-season while they were chained up outside by the people who were supposed to care for them or those who were killed because they lacked the rare speed and stamina to make the grade.

Tell Millennium Hotels and Resorts to stop sponsoring the Iditarod

Saint Nick wouldn’t be too happy if he knew Urban Outfitters continues to sell cruel animal-derived products—including wool, cashmere, mohair, leather, down, silk, and alpaca fleece—which is contrary to its goals of being “sustainable” and “ethical.” PETA made it clear that no matter where animal-derived products come from, they are a result of exploitation and cruelty. Following a PETA undercover investigation into a Peruvian alpaca farm that supplies fleece to the company’s brands—which revealed that workers restrain alpacas, yank them by their tails, and wound them with sharp shears—we turned up the heat even more by telling Urban Outfitters to cut all the cruelty. Despite this, the company and its associated brands, including Free People and Anthropologie, have not yet dropped animal-derived products.

Monkeys aren’t elves. Brands on the 2020 “nice” list, including Costco, Super King Markets, and Wegmans, know this already, but apparently, Publix needs to learn its lesson. Publix continues to sell coconut products from brands that have ties to monkey labor even after hearing from PETA that on certain coconut farms, workers chain monkeys for extended periods, transport them inside cages so small that they’re barely able to turn around, and force them to climb trees and pick coconuts.

The holidays are about giving back, which is why Starbucks is on our naughty list for making a quick buck off folks just trying to make a kind decision by ordering a drink made with vegan milk. By dropping this unnecessary surcharge, Starbucks could keep dairy-free customers coming back and encourage others to make healthier, more compassionate, and more environmentally friendly choices—which CEO Kevin Johnson has even acknowledged.

The amount of coal that PETA would like to give SeaWorld would fill up every marine park tank in existence—which would be a far better option than keeping orcas, who can swim up to 140 miles every day in the ocean, in small concrete, featureless tanks. Although SeaWorld has faced tons of backlash, thanks to successful PETA efforts, compassionate supporters, and horrified viewers of the shocking documentary Blackfish, 20 orcas, 140 other dolphins, and countless other animals still remain in SeaWorld’s miserable tanks (after 40 orcas and nearly 300 other dolphins died on SeaWorld’s watch). Following a vigorous PETA campaign, SeaWorld had to stop breeding orcas—but it’s still forcibly breeding belugas and bottlenose dolphins (sometimes after drugging them) and confining the marine mammals to small chemically treated tanks. If SeaWorld ever wants to make it off the naughty list, it can start by ending its cruel breeding program and retiring the animals it holds captive to seaside sanctuaries.

Petco (and Its Suppliers)

PETA’s present to Petco is putting the brand on blast. Petco stores around the country confine betta fish to tiny plastic cups with scarcely a couple of inches of water inside that are stacked on top of one another. Scores of customers have complained of finding dead, sick, and injured bettas floating in filthy water on the chain’s store shelves. Walmart has already banned the sale of live fish—Petco needs to follow its lead and ban it as well. 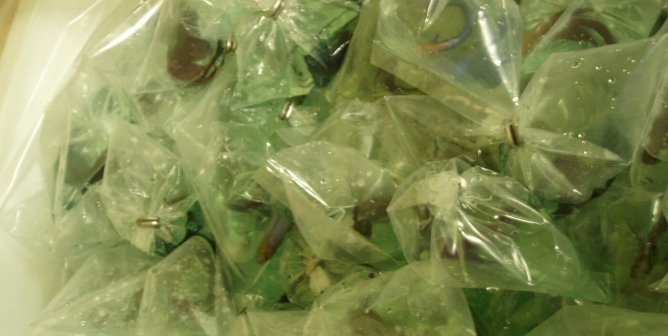 A PETA video exposé revealed that betta fish are often transported from dealers to pet stores like Petco in tiny plastic bags without enough water to keep their bodies submerged.

Krispy Kreme, Domino’s, and Wendy’s are the ultimate Grinches for not adding vegan-friendly options to their menus. Krispy Kreme doesn’t have any vegan doughnuts or milks, even though so many other doughnut and coffee chains do.

Carl’s Jr., Burger King, and others offer vegan items on their menus, and it’s time for Wendy’s to do it, too. If the chain wants to see any presents from PETA, the least it can do is offer a vegan burger on its menu.

Unlike popular pizza chains that have added vegan options—including Pizza Hut’s Beyond Italian Sausage, California Pizza Kitchen’s vegan chicken, and Two Boots’ vegan cheese—Domino’s still hasn’t added vegan options to its menu. Maybe the chain can offer coal as a seasonal topping this year, since that’s all it’s getting from us.

PETA knows Hermès has been bad, because it still makes products with animal skins. We exposed the “luxury” brand for the extremely cruel treatment of alligators on a farm that supplied an Hermès-owned tannery. An investigator found alligators in small, filthy tanks and workers shooting them in the head with a captive-bolt gun and stabbing others to try to dislocate their vertebrae. We also released a first-of-its-kind investigation into the largest ostrich slaughter companies in the world—including one that supplied ostrich skins to Hermès—where workers were seen restraining birds, electrically stunning them, and slitting their throats.

Hermès is planning to build Australia’s largest crocodile factory farm, which would imprison up to 50,000 crocodiles at a time so that their skin can be turned into expensive bags, belts, and other accessories. Because of the cruelty involved, more and more companies—including Calvin Klein, Tommy Hilfiger, Chanel, Diane von Furstenberg, and Nordstrom—are ditching exotic skins.

If you want to be on PETA’s “nice” list this year, don’t support cruelty to animals! And if you’re feeling the generous holiday spirit, help us accomplish more for animals by making a kind donation.