After learning that sheep are restrained and mutilated for wool, that goats scream in pain and fear as their hair is torn out, and that calves are branded on the face for leather, do you really want anything made from animals hanging in your wardrobe? We don’t think so!

That’s why PETA’s doing everything that we can to pressure URBN brands—including Urban Outfitters, Anthropologie, and Free People—to ban wool, cashmere, mohair, leather, down, and alpaca fleece.

PETA Is Urging Urban Outfitters to Do Better

PETA is standing up for suffering animals and mindful shoppers who have been led to believe that they’re buying from an ethical, progressive company, when they’re really not. We’re staging international demonstrations, launching far-reaching social media campaigns, and, as a shareholder ourselves, taking our message straight to the company’s CEO and board.

Keep reading to learn how we’re turning the heat up on these brands and how you can help us keep the momentum going.

On the birthday of URBN Global CEO Sheila Harrington—who oversees Urban Outfitters and Free People—PETA supporters crashed the party to deliver a message for animals who are killed for leather, down, cashmere, and other cruelly obtained materials sold by Urban Outfitters brands.

Outside of Harrington’s Philadelphia home, demonstrators in goose, alpaca, cow, goat, and sheep masks blasted eerie birthday music while holding signs reading, “No Birthday for Me Because of You”—a reminder that animals don’t want their lives to be cut short for clothing.

What better time to kick off our week of action against Urban Outfitters brands than on the busiest shopping day of the year? That’s right—from Black Friday on November 26, until December 3, we called on shoppers to join us through call-ins, targeted social media posts, leafleting, stickering, and more to urge the company to stop selling animal-derived materials.

Ahead of our weeklong event, PETA launched a flyposting campaign targeting 15 Urban Outfitters, Free People, and Anthropologie stores across New York City, confronting shoppers with images of sheep and goats abused for sweaters like those on Urban Outfitters brands’ racks.

During PETA’s week of action, supporters continued taking to the streets in our bold demonstrations in New York City, New York…

… and other cities across the U.S. to show the company the true cost of selling cruelly obtained clothing. 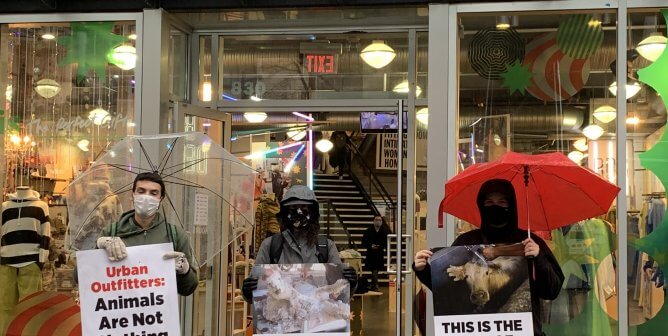 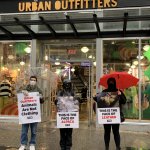 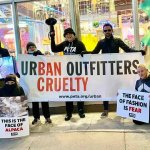 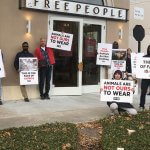 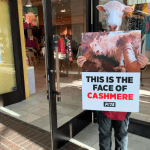 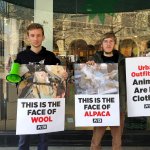 Throughout the week, we also called on supporters to turn their “Karen” on and speak to a manager at their local Urban Outfitters brand stores, clog up the brands’ online “chat” service, share PETA’s short documentary The Face of Fashion Is Fear, chalk an animal rights message outside a store, and more.

In time for the fall shopping season, PETA has joined forces with street artist Praxis to launch a flyposting campaign in Philadelphia, which blasts Urban Outfitters for failing to go leather-free. Across the city, shoppers will see our bold message featuring a shopper tearing skin off a cow.

Our eye-catching display targets the brand’s Navy Yard headquarters and stores near the University of Pennsylvania and Rittenhouse Square Park, urging passersby to recognize the individual behind every leather accessory.

We know that this generation’s trendsetting, environmentally conscious consumers don’t want to wear the fleece of alpacas, the wool of sheep who were roughly sheared and left bleeding from deep wounds, or leather made from gentle cows, who are torn away from their families before they’re hung upside down and their throats are cut. The question is, when will Urban Outfitters listen to its customers by ending the sale of animal-derived materials? As a shareholder of the company, PETA took our concerns straight to its board at the annual meeting on June 8, right before taking to the streets in a passionate demonstration.

To speak up for the individuals who are killed for clothing, PETA protesters in goat, cow, alpaca, and sheep masks gathered outside an Urban Outfitters store and shot blood-red smoke into the sky to blast the company for selling cruel products.

Before stepping foot into one of Pittsburgh’s Urban Outfitters, Anthropologie, or Free People stores, in-person shoppers may face a provocative reminder from fashion victims themselves. PETA placed 10 ads on bus shelters and kiosks throughout the city, featuring a cow, a goat, an alpaca, and a sheep, pleading with the brands and their customers: “I want you to change.”

Pittsburgh is consistently ranked as a top city for millennials—prime customers of the Urban Outfitters brands and a group PETA hopes to reach as pandemic restrictions ease and shoppers seek back-to–“real life” wardrobes. The images of animals who are exploited and killed for sweaters, jackets, or handbags serve as a wake-up call for shoppers who still support Urban Outfitters brands.

Socially distanced PETA protesters marched outside a Milwaukee Urban Outfitters store to give the company a wake-up call about its sale of wool and other materials that are violently stolen from animals. Supporters confronted customers with gruesome new video footage of wool shearers punching and mutilating sheep.

PETA’s takeover didn’t end there—we also placed ads on two city bike stations outside Urban Outfitters and just a block away from Anthropologie showing everyone the terrible price that animals pay for wool, alpaca, and cashmere.

In anticipation of Black Friday, PETA went all out for animals with a mobile billboard circling outside the Urban Outfitters, Anthropologie, and Free People stores in Philadelphia. Showing actual video footage obtained during PETA’s and our affiliates’ investigations into the alpaca, mohair, cashmere, down, leather, and wool industries, our billboard reminded shoppers to buy cruelty-free items on the busiest shopping day of the year.

To launch our campaign, PETA and our affiliates and supporters took to the streets outside Urban Outfitters, Anthropologie, and Free People stores worldwide to demand that these brands sell only animal-free products.

The bold demonstrations followed a recent PETA undercover investigation into the world’s largest privately owned alpaca farm, which exposed workers who tied down and mutilated pregnant alpacas, as well as the dozens of other videos that we’ve released revealing that during shearing, workers hit, kick, and mutilate sheep for their wool; leave goats with bloody, gaping wounds at mohair and cashmere operations; burn, electroshock, beat, and slaughter cows to make leather; yank out geese’s feathers by the fistful for down; and boil silkworms alive to produce silk.

Protesters in Philadelphia walked a mile in animals’ shoes to show shoppers the real cost of their purchases. They marched from Anthropologie to Urban Outfitters to Free People in the “closed for cruelty” demo, blocking the store entrances with an “alpaca” to remind patrons that alpacas are sensitive, intuitive, and deserving of compassion. They even make quirky humming sounds when they’re curious or content.

In London and Dublin, activists protested outside Urban Outfitters flagship stores with graphic signs and speakers, playing audio clips of tortured animals that compelled bystanders to confront the painful reality that animals in the fashion industry endure.

Protesters in Munich dressed as a sheep, a cow, an alpaca, and a goose sectioned off the area in front of an Urban Outfitters store to confront customers with the animals whose lives are completely disregarded by the fashion industry. Geese, for example, lead complex lives, forming lifelong bonds with their mate and community.

Activists also stood outside the Anthropologie and Urban Outfitters entrances in Paris to remind shoppers that their fall coats aren’t worth the pain inflicted on defenseless animals.

In Milan, protesters stood outside an Urban Outfitters store holding signs that depicted terrified animals crying out for help before being slaughtered.

The demonstrations continued in Sacramento and San Francisco, where participants stood outside Urban Outfitters and Anthropologie and placed “closed for animal cruelty” stickers on the store windows.

We’re also turning the heat up on social media, encouraging everyone to use their platform to demand ethical fashion from Urban Outfitters brands. On our Instagram account @thefaceoffashionisfear, we’re featuring footage of bloody, filthy sheep on farms, cows being held down and branded for leather, geese being plucked alive, and other horrors to remind everyone to refuse to support Urban Outfitters brands until they stop using animal-derived materials.

We took to Twitter, too, with “The Face of Fashion Is Fear: a Thread,” a series of tweets with footage of alpacas vomiting on shearing tables, workers repeatedly punching sheep in the head, workers cutting chunks of flesh off lambs, and more. Sheep are emotionally complex animals and are deeply connected to their flock—they’re even able to distinguish the faces of at least 50 other sheep.

It's routine for terrified sheep to be beaten, stomped on, kicked in the face, and have their throats slit for wool.

We need your help! Join our bold protests to turn up the heat on Urban Outfitters even more. If you’re unable to join our demonstrations, order free leaflets to distribute outside your local stores and post polite messages on the Urban Outfitters brands’ social media accounts urging them to stop using animals for fashion.

And call the corporate headquarters of Urban Outfitters, Inc., at 215-454-5500 (then press 0) and ask to leave a message for CEO Richard Hayne. Urge the company to stop supporting the exploitation of animals for their wool, skin, and hair.

We need your support NOW to win this campaign!

It’s past time for Urban Outfitters to get the memo: Suffering is not in style—it never was. With all the vegan textiles available, violence has no place on store clothing racks—and definitely no place in your closet. Check out PETA’s “The Face of Fashion is Fear” petition to urge Urban Outfitters brands to stop selling violently obtained animal-derived materials.

PETA’s demonstrations over the years have led to significant milestones in the fashion industry, from the widespread decline of animal fur used by major designer brands to the passage of landmark legislation. If you want to help us free all animals from being used for clothing, find out how to organize your own demo:

How to Organize and Lead Your Own Demonstration