Petco can rebrand itself all it wants, but to become a “full health and wellness company,” it’ll have to do a lot more than just ban shock collars. The store’s name may have changed, but these three things haven’t:

1. PETA’s Investigations of Petco Suppliers Are As Relevant As Ever

When PETA exposed Petco’s partnership with Holmes Farm—a massive animal dealer in Pennsylvania that supplied hamsters, rabbits, and other small animals to the company—the chain made it clear that its priority is profit, not animals’ “health and wellness.” Even after Petco’s representatives visited the farm—where animals were being confined to plastic bins, frozen alive, and crudely gassed to death—the chain continued to order and receive animals by the hundreds from the dealer.

Then there was the time a PETA investigator went undercover at Sun Pet Ltd., an Atlanta-based wholesale animal dealer and longtime Petco supplier. Our investigator documented that rabbits, guinea pigs, gerbils, mice, and rats were forced to eat, sleep, urinate, and defecate all in the same space. Video footage showed workers abusively handling hundreds of animals and cruelly killing others. During more than three months of employment, not once did PETA’s investigator see anyone from Petco’s corporate offices inspecting Sun Pet’s house of horrors. As Sun Pet’s parent company’s 2019 annual report reveals, Petco has continued to be a “significant customer” of the shoddy animal dealer’s.

In December, damning Colorado Department of Agriculture records echoed what PETA’s been saying all along: Animals suffer and die at Petco stores. Between January and July 2019, 12 Petco stores were hit with more than 80 violations of the state’s Pet Animal Care Facilities Act, including for neglect, filth, and poor recordkeeping. At one Petco store, a thin leopard gecko was denied veterinary treatment over nine days, as was a ferret at another store who was suffering from a painful prolapsed rectum and a suspected upper respiratory infection—both animals died.

Is this really the type of company you want to support?

2. Betta Fish at Petco Are Not Healthy or Well

Unless Petco plans to stop selling betta fish, the “Suffering + Death Co” would be a more suitable new moniker for the company. A PETA video exposé based on visits to more than 100 of the chain’s stores across the U.S. revealed dead and dying fish floating in cups of contaminated water—some were left to suffer from painful or debilitating health conditions.

We even extended an olive branch to Petco earlier this year with an offer to buy all the betta fish at its stores and end our campaign against the corporation. The company’s silence said it all: It doesn’t care that these fish feel, think, and have desires of their own—it treats them as mere items to be stocked, stacked, priced, and unloaded. At Petco, profit is always the top priority.

Clearly, the chain doesn’t care about the living, feeling beings it sells—don’t trust it to care about any companions you share your home and heart with, either.

We’ve also documented a long list of incidents involving animals who’ve been traumatized, allowed to escape, severely injured, and even killed in Petco grooming salons. In November, for instance, a Petco groomer tied a rubber band around the ear of a dog named Baylee, cutting off the circulation and necessitating amputation. 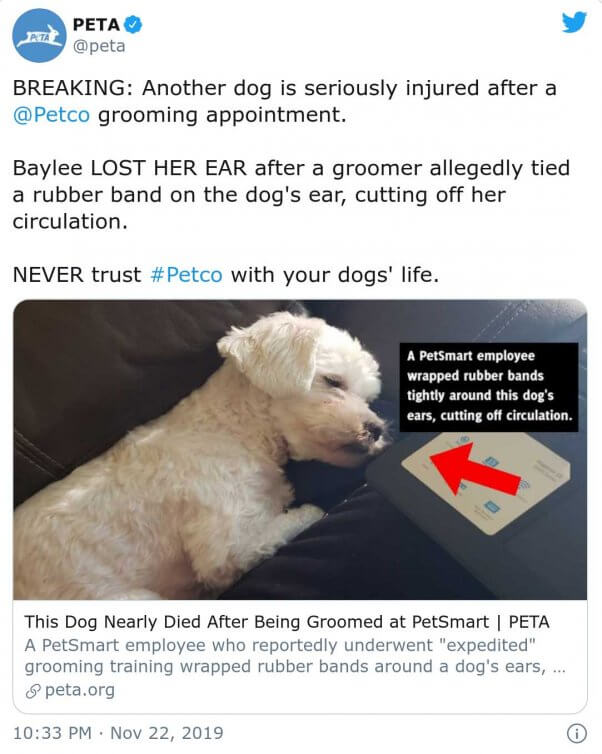 That same month, Dali—an “active, healthy and hyper” dog—was dropped off by his guardian, Mafang Yao, at a Petco grooming center in California. It was the last time Yao would ever see Dali alive—when she returned to pick the dog up, she was told that he had experienced “breathing issues” during his appointment and later died. 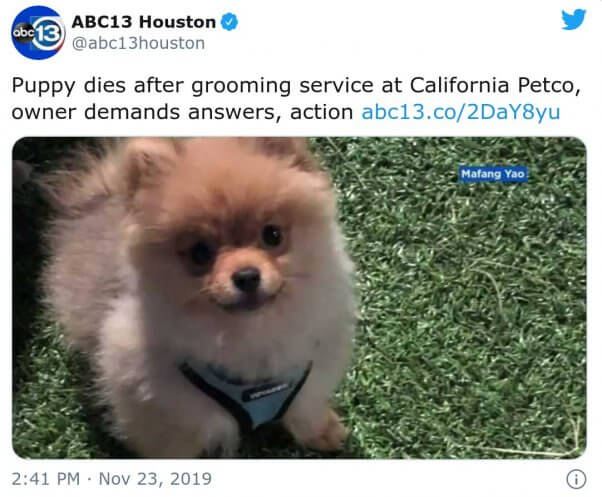 Then there was Simba, who was allowed to escape from a kennel at a Petco store in Pennsylvania; 1-year-old Sarge, who died while being groomed after “protocols were not followed” at a New York Petco store; Baboo, a 7-year-old shih tzu who reportedly sustained a broken jaw during a grooming appointment at a New Jersey Petco; and Oliver Buttons, an 18-month-old cairn terrier who needed stitches for lacerations to his face and neck as well as surgical glue for nicks all over his body that were inflicted by a Petco groomer in Wisconsin. You get the idea. Whether it’s selling animals or grooming them, Petco deals in volume.

The only way to safeguard your animal companions’ “health and wellness” is to groom them at home yourself.

As part of its rebranding, Petco has pledged to stop selling shock collars—devices that can cause dogs extreme distress, have been known to malfunction, and shouldn’t have ever been sold to begin with. Banning these torture tools is a step in the right direction, but if the chain truly wants to keep going on a humane path, it’ll address the slew of atrocities above, too. As consumers, it’s up to us to help those who can’t help themselves—put your money where Petco’s mouth isn’t: with retailers that don’t exploit live animals. Our list of online companion animal supply stores makes doing so easy:

Until Petco Shapes Up, Support These Retailers Instead