The wildly popular Netflix series Tiger King opened people’s eyes to the horrors of tiger “cub-petting” encounters and photo ops. The show gave many viewers their first glimpse of the shocking abuse and neglect that animals endure at roadside zoos across the country. PETA works tirelessly to help rescue animals from such tourist traps and send them to reputable wildlife sanctuaries—and you can help.

In the wake of Tiger King‘s release, concerned roadside zoo whistleblowers have shed light on what happens to captive tigers and other wild animals used in hands-on encounters like those seen in the series. PETA is asking whistleblowers, specifically employees or volunteers at roadside zoos, to come forward with details of abuse or neglect that they have witnessed. To help spread our call, we’re placing bold, full-page ads in papers across the country—including in cities that are home to roadside zoos featured in Tiger King. 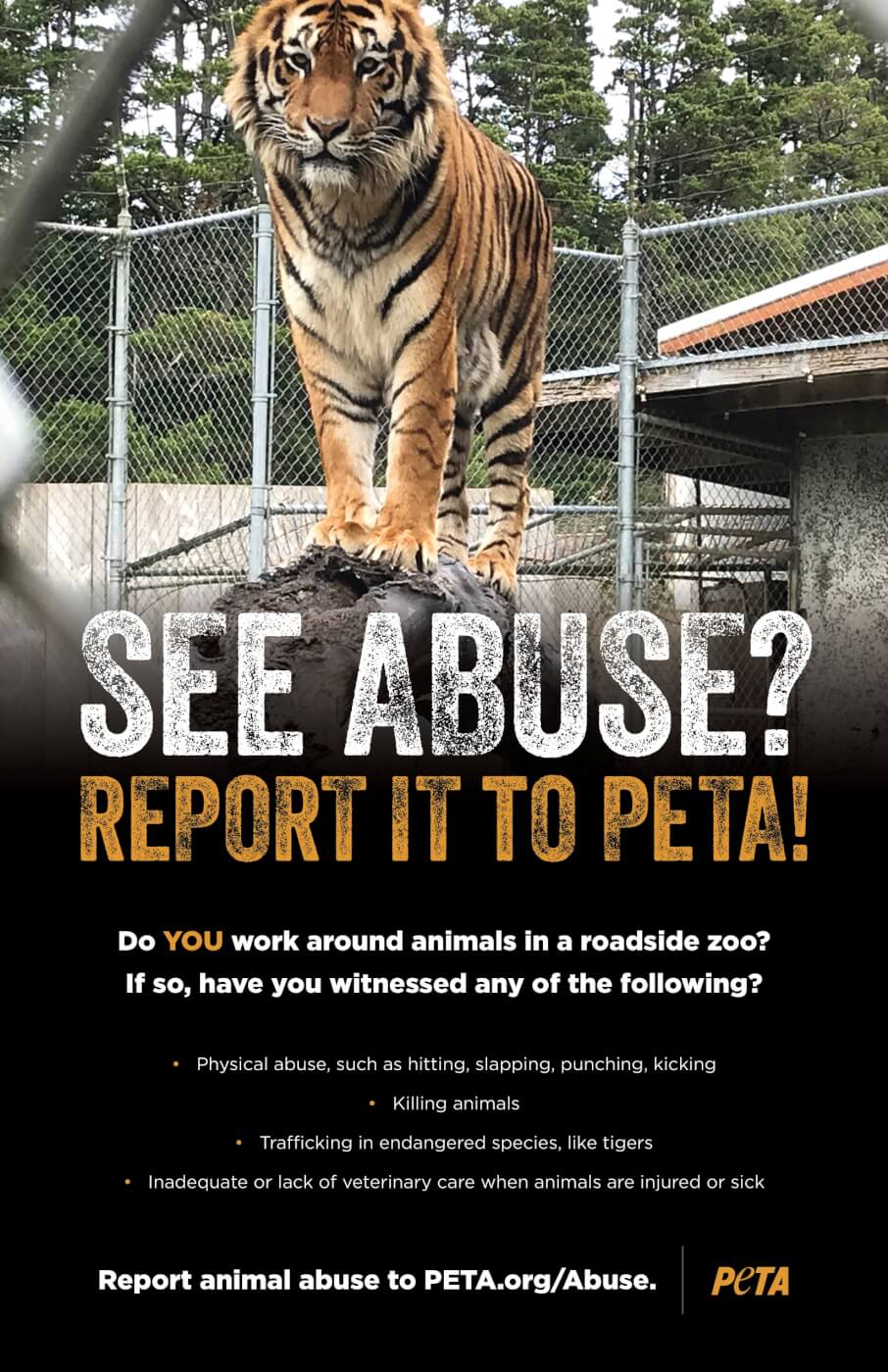 PETA’s ads will run in the Wynnewood Gazette in Oklahoma, near Joe “Exotic” Maldonado-Passage’s former facility, now branding itself as “Tiger King Park” and operated by Jeff Lowe; the Myrtle Beach Sun News in South Carolina, near Doc Antle’s Myrtle Beach Safari; the Sun Sentinel in Miami, Florida, near the Zoological Wildlife Foundation; and other newspapers.

Tips From Roadside Zoo Whistleblowers Can Save Animals’ Lives

Through whistleblowers, PETA has learned of shocking cruelty in circuses, at roadside zoos, in laboratories, and elsewhere.

For example, a whistleblower tip from inside The Mobile Zoo in Alabama led to the rescue of a chimpanzee and three bears, the closure of the facility, and a plea of guilty to 14 counts of cruelty to animals by the owner.

Although PETA is mainly placing these ads in areas near facilities featured in Tiger King, we want to hear from anyone who has concerns about animal suffering at any roadside zoo or other captive-wildlife attraction.

Have You Seen Something Disturbing?

Now more than ever, we need kind people on the inside to come forward if they witness the type of abuse, neglect, and trafficking in endangered species exposed in Tiger King.