On evenings when you just can’t bear the thought of toiling in the kitchen, there’s one thing that will never let you down: frozen pizza. These tasty freezer meals will keep you sane on your busiest days and help free up some much-needed time to relax and not worry about what’s for dinner. During COVID-19 self-isolation, a frozen pizza can help you put off another trip to the grocery store, and even though you’re home, you still might not want to prepare even a simple meal. Sometimes, you just want to pop a frozen pizza in the oven after a long day of working from home so that you can get to streaming your favorite movie.

Whether you’re craving a cheese-free pie, savory pesto and vegan sausage, or a classic Margherita, these brands have all your frozen vegan pizza cravings covered:

MorningStar’s Veggie Pizza Bites are the brand’s first foray into the world of frozen pizza. These crisp pockets of cheesy goodness are available in two flavors, Veggie Sausage and Veggie Pepperoni. The portable package makes them perfect for dipping into warm marinara sauce or creamy vegan ranch. 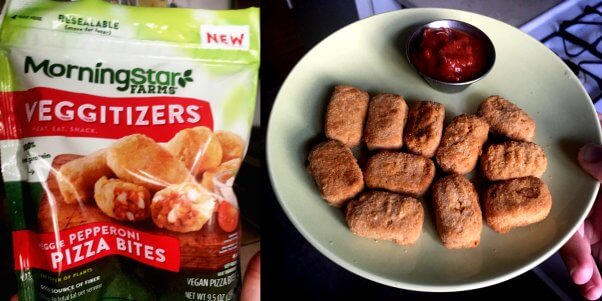 This brand became known for its vegan cheeses, which help save cows used by the dairy industry from lifelong suffering. Cow’s milk is meant for baby cows, who are separated from their mothers shortly after they’re born. This is distressing to both mother and calf, who develop a strong bond even before birth, which is why it’s so important to choose vegan cheese. Daiya makes much more than just cheese, including frozen vegan pizzas with soy- and gluten-free vegetable crusts. Gluten-free flavors include Meatless Pepperoni Style, Supreme, Meatless Meat Lover’s, Cheeze Lover’s, Margherita, Mushroom & Roasted Garlic, and Fire-Roasted Vegetable. The vegetable crust, made with cauliflower, sweet potato, and spinach, is gluten-free. Varieties made with it include Italian Herbs & Cheeze Style, Meatless Pepperoni Style with Jalapeño, and Mediterranean.

Classic Mozza, BBQ Chick’n, Buffalo Chick’n, and Supreme flavors make up Alpha Foods’ selection of vegan frozen pizzas. They are all single-serve and can be prepared in the microwave.

Blackbird Foods on the East Coast makes savory seitan, which it uses as a hearty topping on some of its hand-tossed vegan frozen pizzas. Flavors include BBQ Chick’n, Margherita, Supreme, and Kale & Mushroom.

A post shared by What a vegan eats (@bir_vegan_ne_yer)

Revisit your childhood with these vegan cheese and pepperoni pizza bagels from Rachel’s Cosmic Cuisine. Serve yours up with your favorite vegan ranch dressing.

Available in gluten-free and wheat crusts, each of these vegan pizzas contains added veggies and fruit in the crust and sauce. Produce like kale, carrots, broccoli, and butternut squash gives the frozen pizzas a nutrient boost.

Now, the only problem that you’re faced with is choosing which delicious pizza you’ll try first. The good news is that you can’t go wrong with pizza. Most of these options can be found at national supermarket chains and health-food stores, and you may be surprised even to find some at your local big-box store.

Is your freezer empty? No worries! Dozens of pizza chains offer vegan options.

Where Can I Order a Vegan Pizza?

If you’re looking for more of a challenge, try your hand at making your own vegan pizzas at home. There are tons of ready-made pizza doughs, or you can make your own homemade dough and top it with your favorite veggies, vegan meats, and vegan cheese.