Dairy Queen’s Non-Dairy Dilly Bar is made with coconut cream and dipped in tasty chocolate. This gluten-free treat is a vegan take on the chain’s original Dilly Bar, which is made with milk that’s been stolen from cows. After a successful nationwide launch in the U.S., these dairy-free bars are now available at locations in Canada, too! 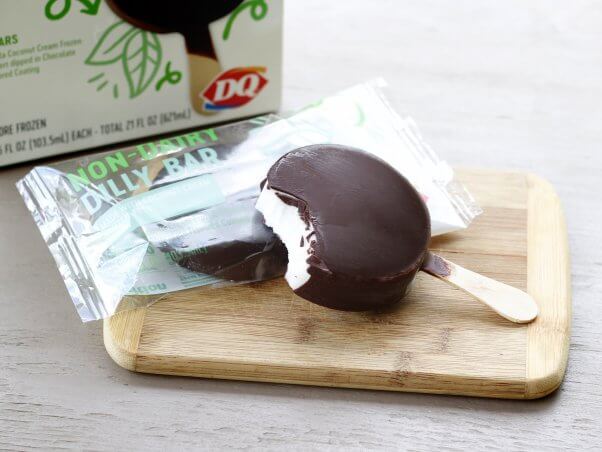 Dairy Queen joins a slew of other national ice cream brands, including Baskin-Robbins and Ben & Jerry’s, in offering a sweet treat that doesn’t harm animals or the environment. These dairy-free bars are Dairy Queen’s first major vegan release and hopefully a sign that the chain will be launching more vegan options in the future.

If you can (safely) get to your local Dairy Queen to give these bars a try, be sure to post a picture on social media—and tag @peta and use the hashtag #Vegan. Then, let all your friends know that they can satisfy their ice cream cravings in a compassionate way.

There is nothing “humane” or natural about humans’ consumption of cow’s milk—or the milk of any other animal. Cows produce milk for the same reason humans do: to nourish their young. Given the opportunity, cows nurture their young and form lifelong friendships with one another. The mother-calf bond is particularly strong—there are countless reports of mother cows who continued to call and search frantically for their babies after they were stolen away from them and sold to veal or beef farms.

Cows have also been known to play games and show a wide range of emotions and personality traits. Some even respond to music! But most cows who are raised for the dairy industry are intensively confined, leaving them unable to fulfill their most basic desires, such as nursing their calves, even for a single day.

You can help keep mother cows and babies together and save nearly 200 animals per year by going vegan right now!

Tell Sonic to Add a Vegan Burger and Ice Cream to Its Menu!