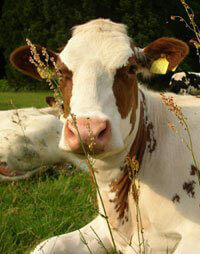 When you add up the damage that the meat industry does to our health, the environment, and animals, the question isn’t really “Why should I go vegan?”—it’s “Why wouldn’t I go vegan?” In case you need any other reasons, here are a few more.

Because It’s the Only Way to End World Hunger

With the global population of humans over 7 billion—more than a billion of whom currently go hungry—the only way to produce enough food is, according to Worldwatch Institute, “to cut back sharply on meat consumption, because conversion of grazing land to food crops will increase the amount of food produced.” We use vast amounts of land, water, and other resources to grow grains and other plants to feed animals who are then used for food, instead of more efficiently feeding humans directly with plants.

For every pound of food that farmed animals are fed, only a fraction of the calories are returned in the form of edible flesh. The rest of those calories are burned away raising the animal to slaughter weight or contributing to feathers, bone, skin, blood, and other parts of the animal that aren’t eaten by humans. This is why animals raised for food have to eat up to 10 pounds of grain to produce just 1 pound of meat.

Because the Meat Industry Makes a Killing by Exploiting Workers

The money-hungry farmed-animal industry exploits poor people and immigrants (many of whom are undocumented). They work for low wages, and union organizing is notoriously difficult. Slaughterhouse work, in particular, is filthy and extremely dangerous—worker injuries are rampant, and dying on the job is a very real possibility. A Human Rights Watch researcher found that “[m]eatpacking is the most dangerous factory job in America,” and the Occupational Safety & Health Administration notes that the “Bureau of Labor Statistics (BLS) reports injury and illness rates for the Meat Packing Industry as 2½ times higher than the national average.”

The biggest slaughterhouses refuse to create safer working conditions by slowing down the lines or providing better training and safety gear because these changes could cut into their profit margins. Human Rights Watch found that employees who are injured at work may be fired if they take time off or try to file health insurance or workers’ compensation claims, and many employees choose instead to “work with the pain,” meaning that injuries are vastly underreported. In addition, undocumented workers are less likely to report injuries or unsafe conditions for fear of being deported.