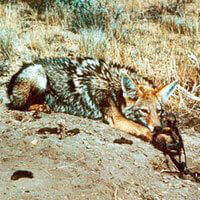 Although most animals who are slaughtered for their fur are raised on notoriously cruel fur farms, millions of raccoons, coyotes, wolves, bobcats, opossums, nutria, beavers, otters, and other fur-bearing animals are killed every year for the clothing industry by trappers.

There are various types of traps, including snares, underwater traps, and Conibear traps, but the steel-jaw trap is the most widely used. The American Veterinary Medical Association calls these traps “inhumane.” This simple but barbaric device has been banned by the European Union and a growing number of U.S. states, including Colorado, California, Florida, Rhode Island, New Jersey, Massachusetts, and Washington state. Arizona does not allow the use of steel-jaw traps on public lands.

When an animal steps on the spring of a steel-jaw trap, the trap’s jaws slam shut on the animal’s limb. The animal frantically struggles in excruciating pain as the trap cuts into his or her flesh, often down to the bone, mutilating the animal’s foot or leg. Some animals, especially mothers who are desperate to get back to their young, attempt to chew or twist off their trapped limbs. This struggle may last for hours. Eventually, the animal succumbs to exhaustion and often exposure, frostbite, shock, or death.

Another cruel trap, the Conibear trap, crushes animals’ necks, applying 90 pounds of pressure per square inch. It takes animals three to eight minutes to suffocate in these traps. Victims of water-set traps, including beavers and muskrats, can take more than nine agonizing minutes to drown.

Because predators mutilate many trapped animals before the trappers return, pole traps are often used. A pole trap is a form of steel-jaw trap that is set in a tree or on a pole. Animals caught in these traps are hoisted into the air and left to hang by the caught appendage until they die or the trapper arrives to kill them.

If trapped animals do not die from blood loss, infection, or gangrene, they will often be killed by predators or hunters. To kill the animals without damaging their fur, trappers strangle, beat, or stomp them to death.

Every year, dogs, cats, birds, and other animals, including endangered species, are crippled or killed by traps. Trappers call these animals “trash kills” because they have no economic value. Some states have regulations on how often trappers must check their traps, and the frequency with which trappers are required to check can vary from 24 hours to one week. Other states, however, have no regulations at all, and animals can suffer for days before they die.

Trapping is an integral part of the fur industry. The only way to ensure that you are not supporting this cruel practice is to refuse to buy any fur or fur-trimmed clothing. Sign PETA’s pledge to be fur-free today.