Updates: Campaign to End Deadly Marmoset Experiments at the University of Massachusetts–Amherst

At the University of Massachusetts–Amherst (UMass), experimenter Agnès Lacreuse drills holes into the skulls of small marmosets, threads electrode leads through their abdomens, zip-ties them into restraining devices, and overheats them with hand warmers to simulate hot flashes associated with menopause—which they don’t even experience naturally. PETA is urging the university to ditch these crude and painful tests—and you can help.

UMass is trying to keep the public in the dark about the grisly marmoset monkey experiments being conducted in experimenter Agnes Lacreuse’s laboratory, going as far as refusing to provide public records that PETA requested. PETA filed a lawsuit with Suffolk County Superior Court in Massachusetts to demand transparency of the taxpayer-funded experiments, including videos of monkeys in stressful social separation tests and a video in which hand warmers are forcefully held on the monkeys’ abdomens. Read more here.

PETA made sure all the new students starting fall semester learned about the university’s appalling monkey menopause experiments. Video footage from the laboratory was displayed on a mobile billboard, and posters were put up all around campus. We raised awareness at the New Student Convocation event, where we passed out leaflets and our reusable “UMass: End Marmoset Experiments” cups to hundreds of students. Students were disgusted to hear about the experiments being conducted at their new university and were eager to learn more about how they could help end the monkeys’ suffering. 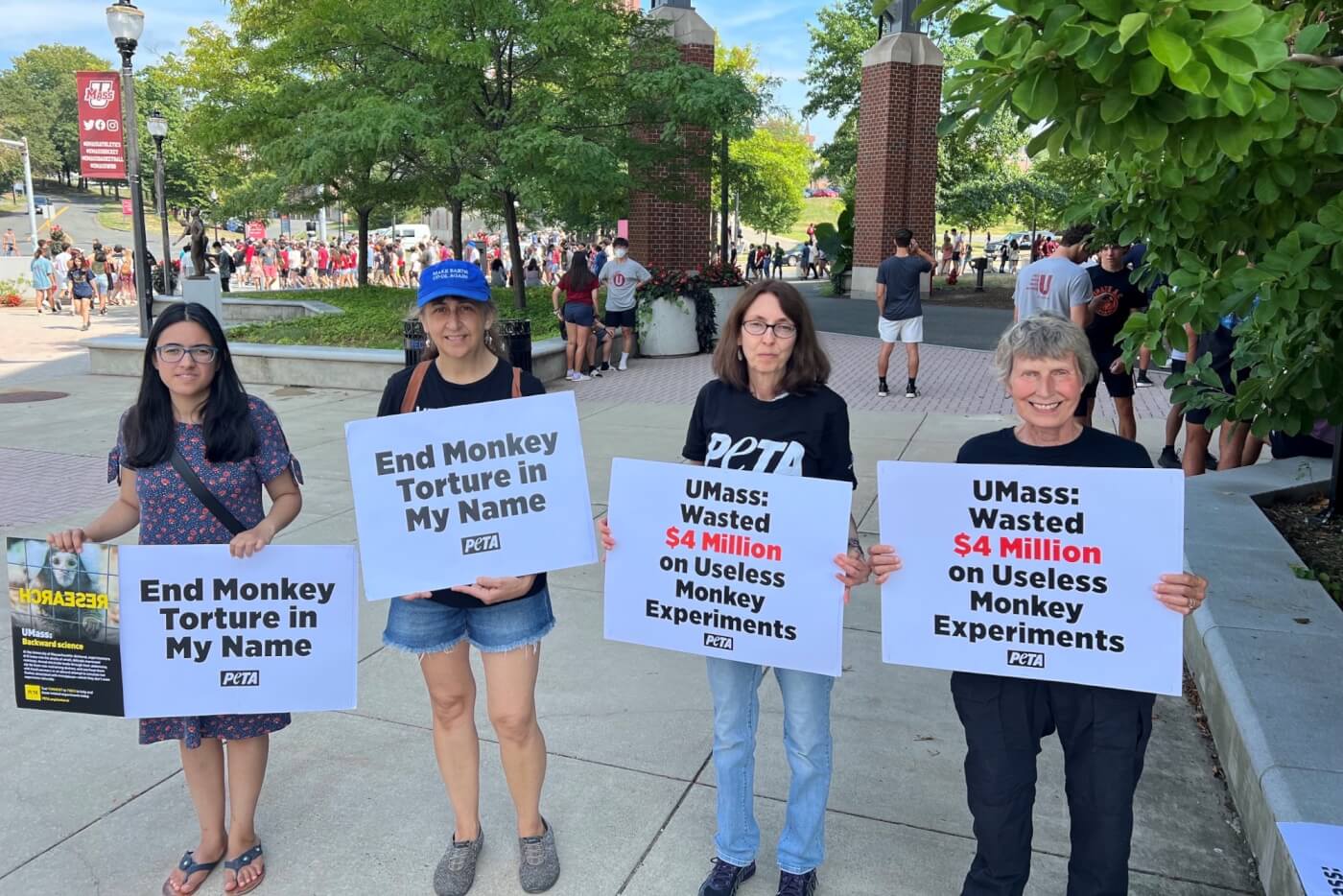 Immediately following Chancellor Kumble Subbaswamy’s free-speech presentation on campus, an activist asked him why he had abruptly shut down talks with PETA scientists about ending the university’s gruesome menopause monkey experiments and shifting to a human-relevant, animal-free research program. Subbaswamy had the chance to practice what he preaches, but he refused to discuss the matter. It appears that when experiments rake in over $4 million in taxpayer funds, the chancellor stops caring about free speech. See his reaction here.

After he finished giving a speech about free speech, an activist approached him about his REFUSAL to reopen discussions with PETA about @AL_marmo’s horrifying experiments on marmosets—you have to see his reaction. pic.twitter.com/Qc5ZZhmWyt

PETA activists disrupted UMass Chancellor Kumble Subbaswamy’s presentation during the annual New Faculty Orientation to teach the brand-new university staff about the monkey torture experiments being conducted at their workplace and to demand that the chancellor call for an end to the experiments before he retires at the end of June. 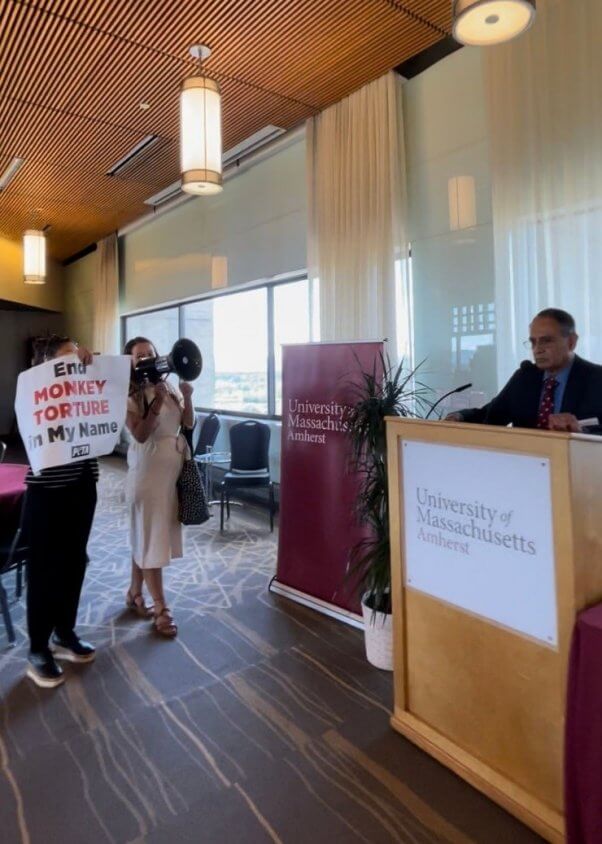 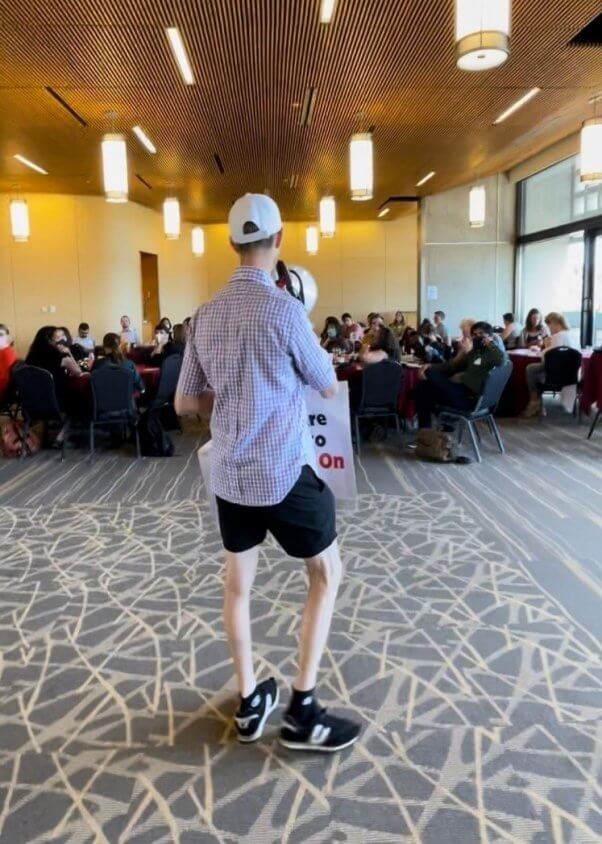 PETA Depicts Menopause Monkey Lab: The Dark Side of UMass

There’s a dark side to UMass, where greed, secrecy, and killing abound. UMass experimenter Agnès Lacreuse was pulled into it, like a real-life Darth Vader. There’s no doubt the tiny marmoset monkeys, whom she named after Star Wars characters, viewed her as a villain when she drilled into their skulls, cut them open, and forced hand warmers onto their bodies before killing them. Read the full story of Anakin, a marmoset imprisoned and killed in the UMass lab, here. 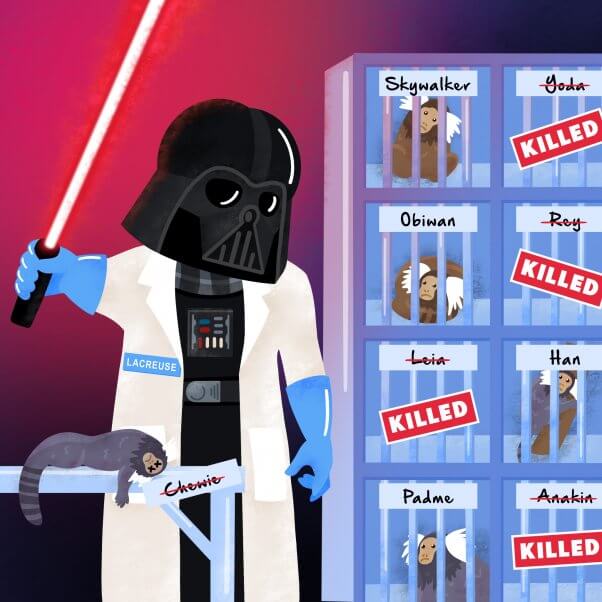 ‘UMass Chancellor, Retire the Monkey Lab on Your Way Out,’ Says PETA

Following the announcement that UMass Chancellor Kumble R. Subbaswamy will retire in June 2023, PETA has urged him to retire the school’s shameful marmoset monkey laboratory, too, and release the monkeys to reputable sanctuaries. The chancellor should take advantage of his remaining time at the university and seize this opportunity to leave a legacy that confirms his stated commitment to “create a better, more just world.”

PETA supporters, led by protesters with firsthand knowledge of menopause, crashed through the doors of the UMass alumni reception at Chelsea Piers in New York City—moments before Chancellor Kumble Subbaswamy took the mic to address the attendees—demanding an end to the monkey menopause experiments. They held signs reading, “Chancellor Subbaswamy: Ban Cruel Marmoset Tests” and “End Monkey Torture in My Name,” while exposing the torment inflicted on monkeys at UMass. Watch the full video here.

PETA supporters speaking out against the monkey menopause experiments paid UMass President Marty Meehan another surprise visit—this time at a higher education summit in Boston. During his keynote presentation, “Higher Education and the Quest for a Better Tomorrow,” supporters marched right into the meeting room and confronted Meehan through a bullhorn about why he continues to allow cruel monkey experiments at his institution. Until he truly seeks a “better tomorrow” by ending the monkey torture at UMass, he will continue to hear from animal advocates. 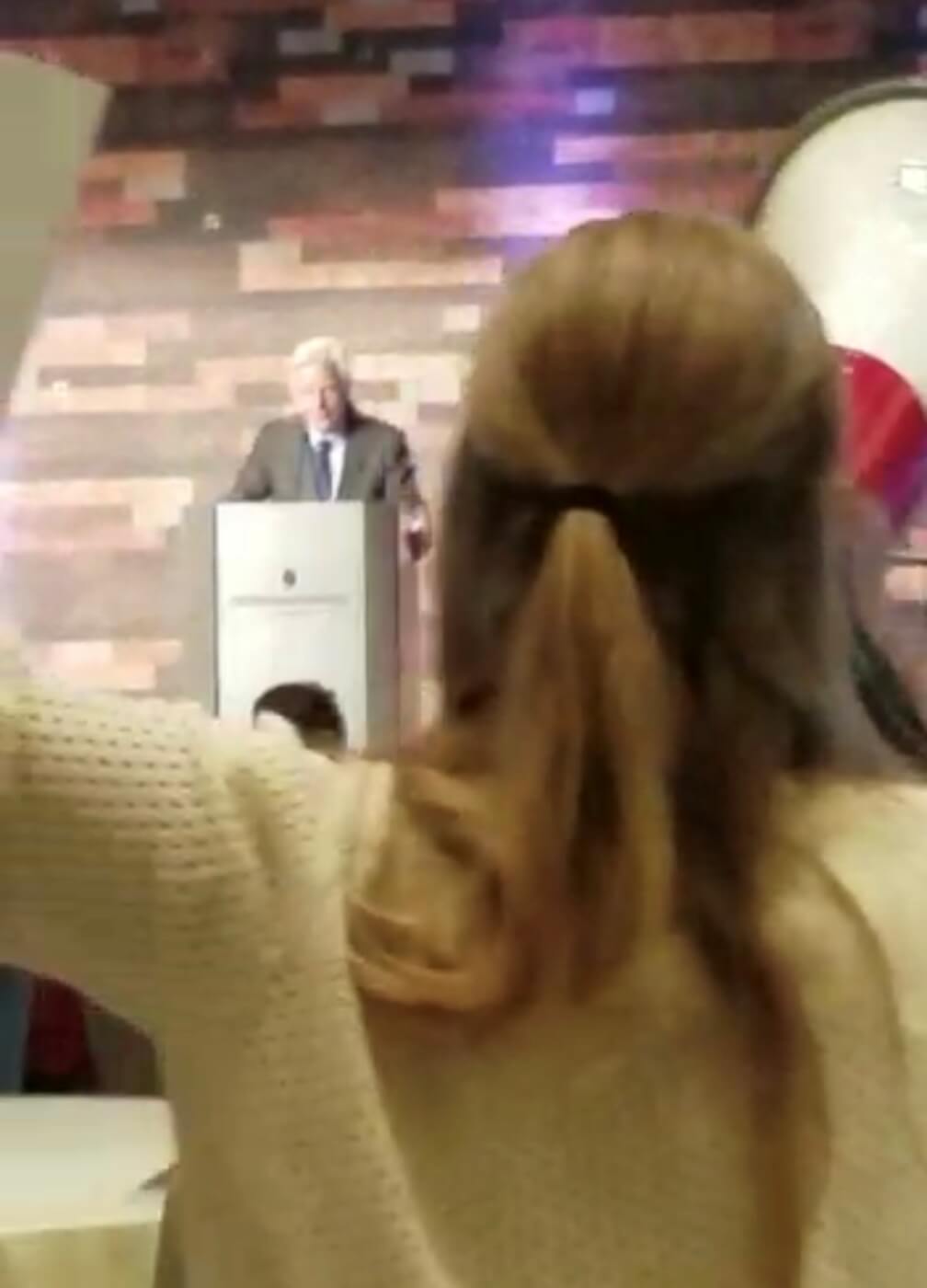 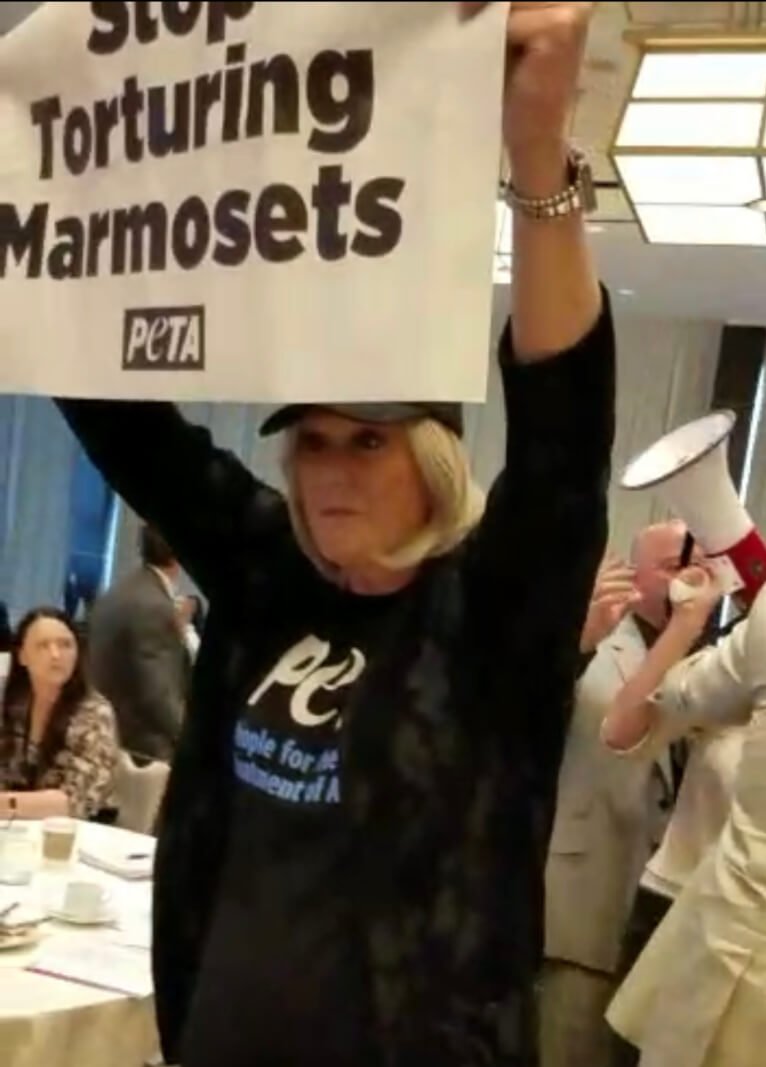 PETA supporters greeted attendees at the entrance of the “UMass in the City” alumni event in Washington, D.C., to shine a light on the university’s cruel and deadly monkey experiments. While UMass served appetizers and drinks to guests on a rooftop bar, advocates spoke up for the monkeys locked in Lacreuse’s laboratory, who are enduring the same fear, isolation, and loneliness that they’ve experienced their entire lives. 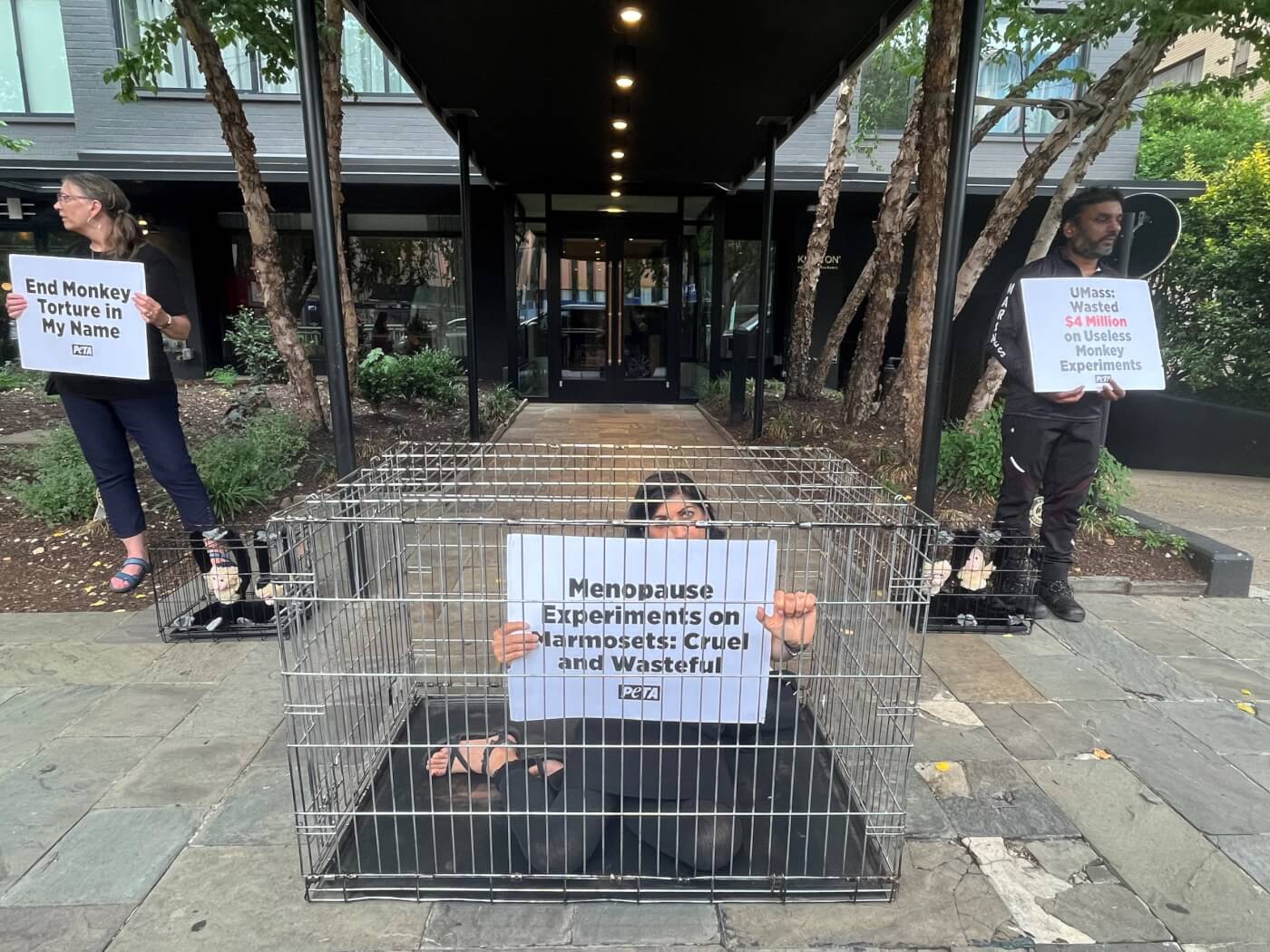 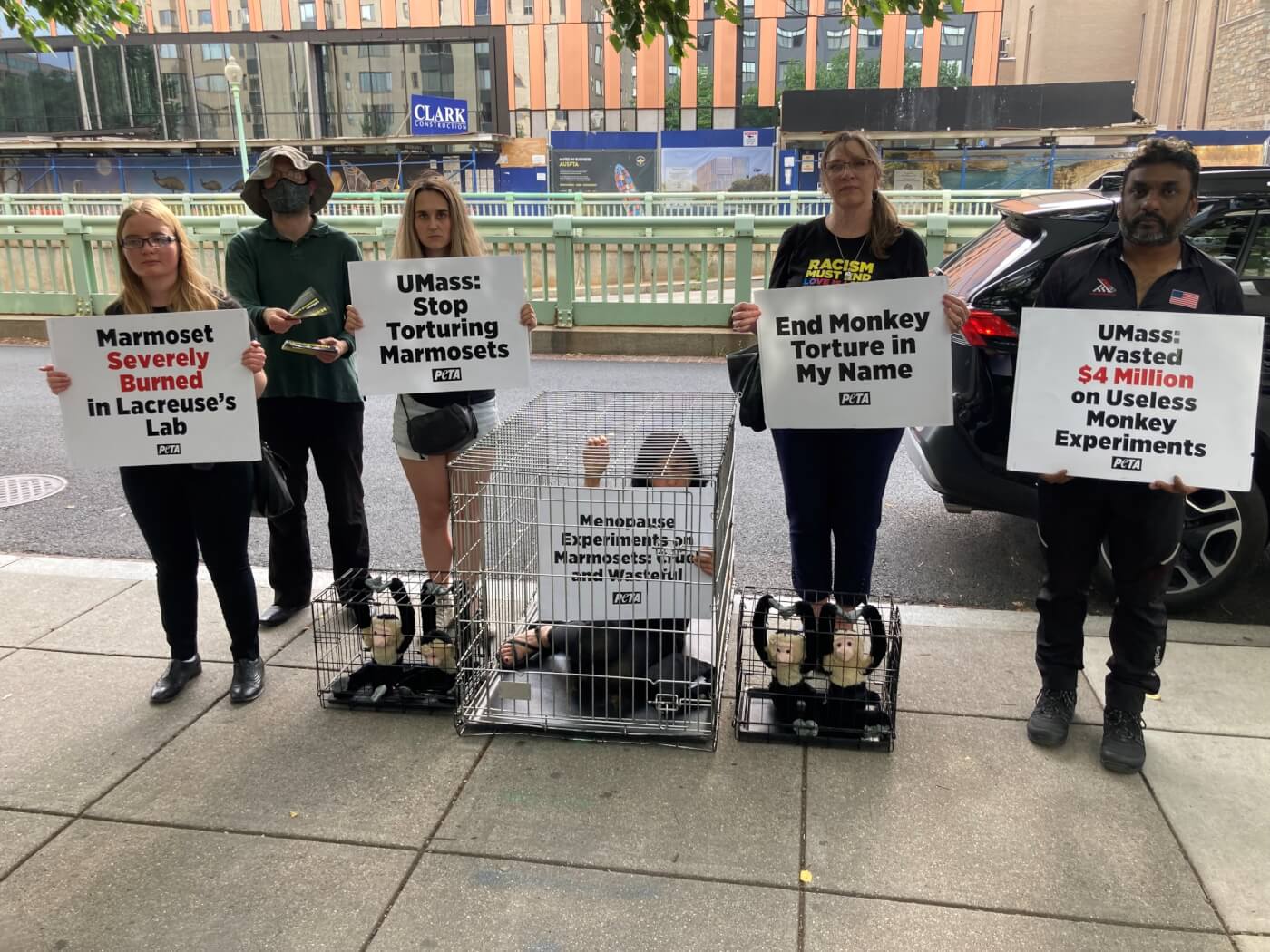 Records obtained by PETA reveal that a marmoset’s escape in the UMass laboratory in 2017 went unreported to federal agencies—and that the mishandling of primates has only intensified since then. PETA filed complaints with the U.S. Department of Agriculture and the National Institutes of Health, urging them to investigate the school’s possible violations of animal welfare regulations and guidelines as well as its failure to comply with reporting requirements. Read more about UMass’ incompetency here.

In solidarity with the marmoset monkeys who are locked inside Lacreuse’s laboratory, two PETA supporters caged themselves alongside 21 caged stuffed monkeys right outside UMass’ graduation ceremony. Commencement attendees couldn’t miss our striking visual and expressed utter disgust with the grisly menopause experiments. 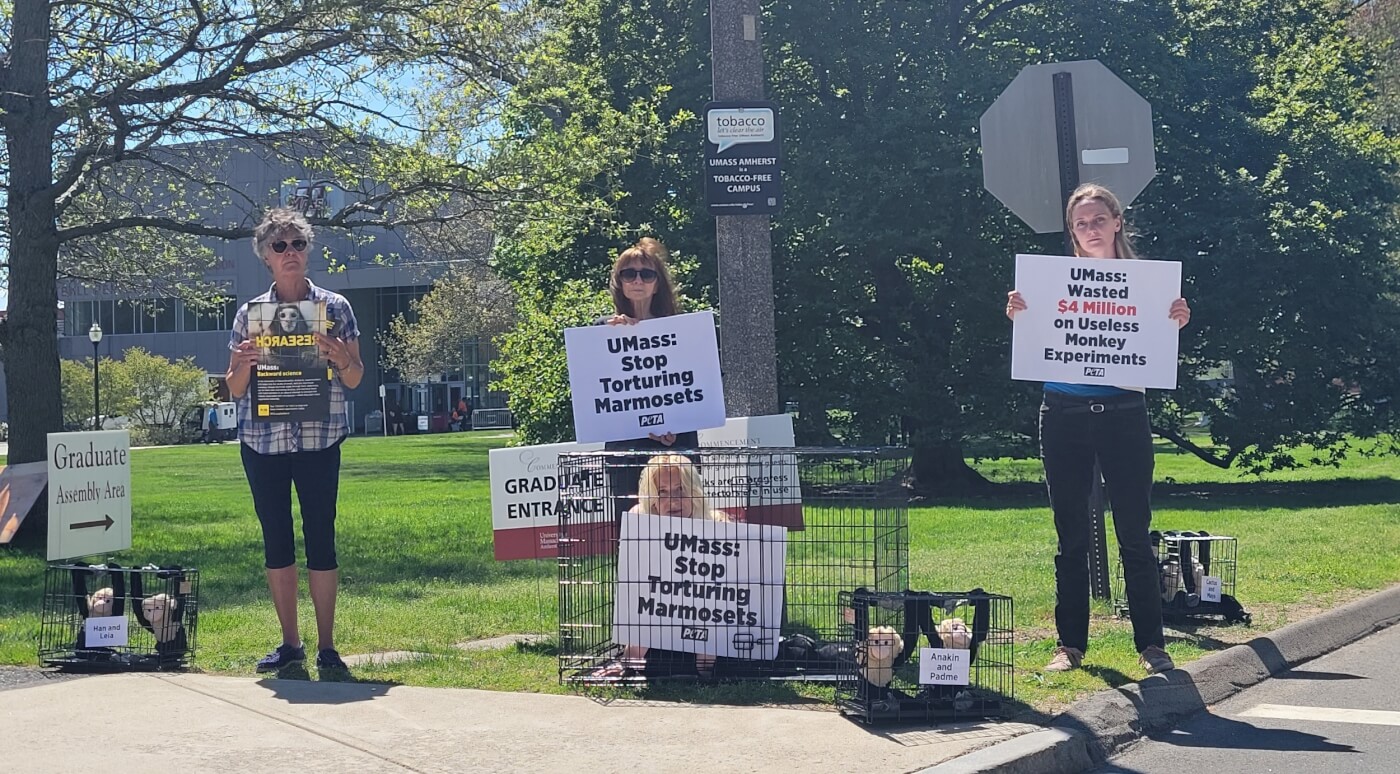 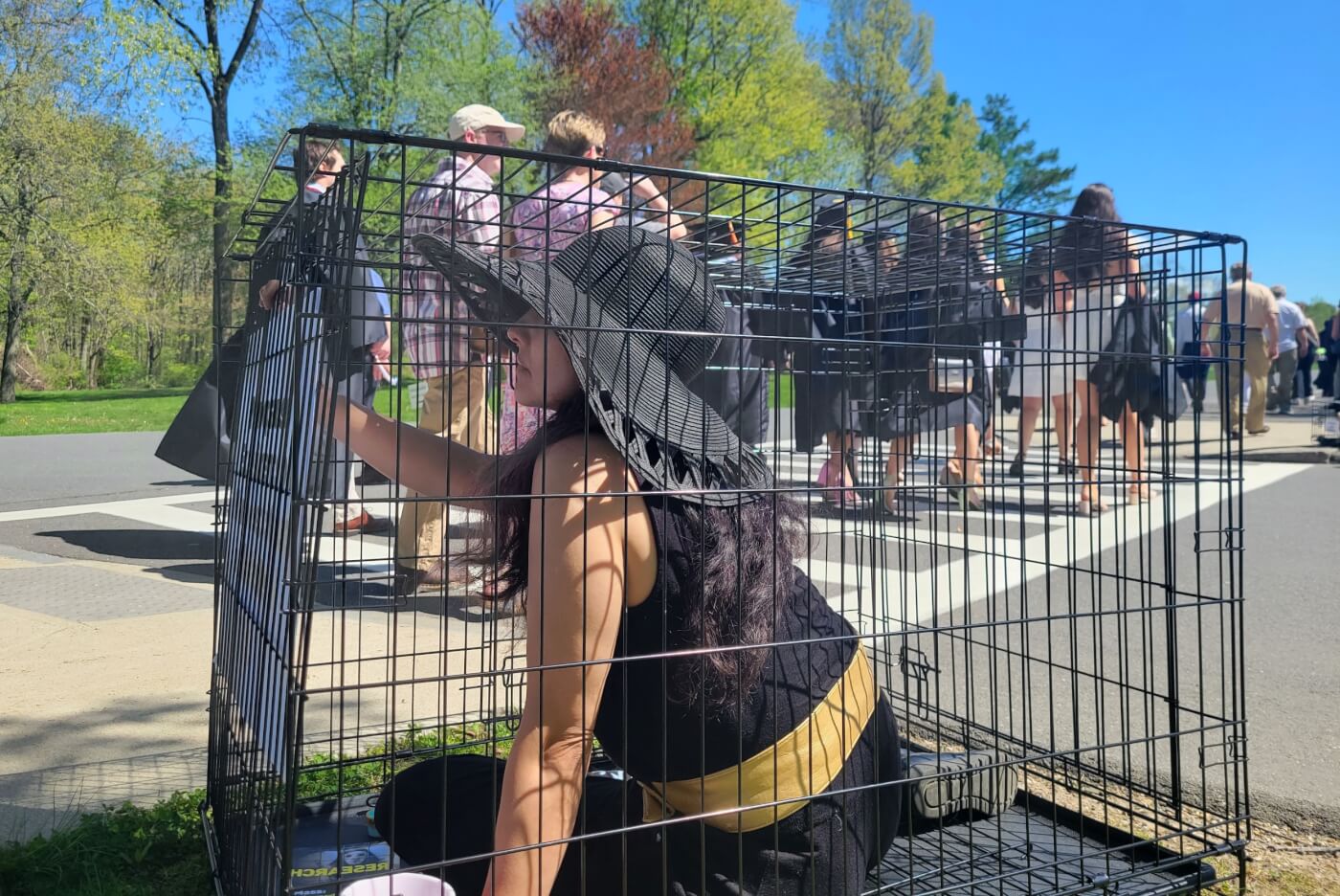 PETA supporters wearing monkey masks welcomed alumni, students, community leaders, and Massachusetts legislators Sen. Ed Markey, Rep. Jim McGovern, and Rep. Kate Hogan to the University Without Walls (UWW) celebration on the UMass campus. The “monkeys” exposed the shameful menopause experiments at the school and highlighted that although the nontraditional online UWW program is progressive, UMass’ experiments on monkeys are still in the Dark Ages. 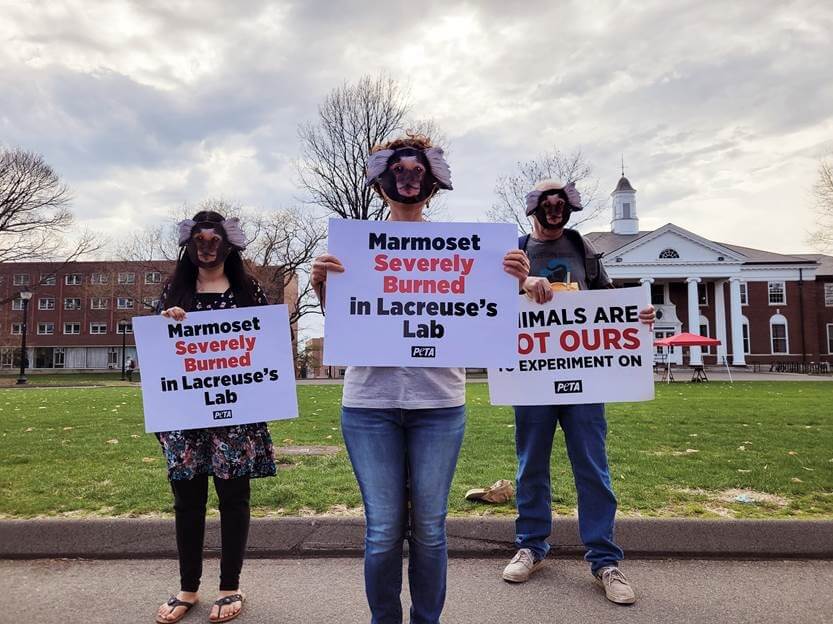 UMass President Marty Meehan was noticeably startled when concerned animal advocates confronted him during his speech at a Florida alumni reception to demand an end to the cruel marmoset monkey experiments. PETA supporters told the attendees about the current torture tests at their alma mater while urging the president to shut down the lab. Watch the full disruption here. 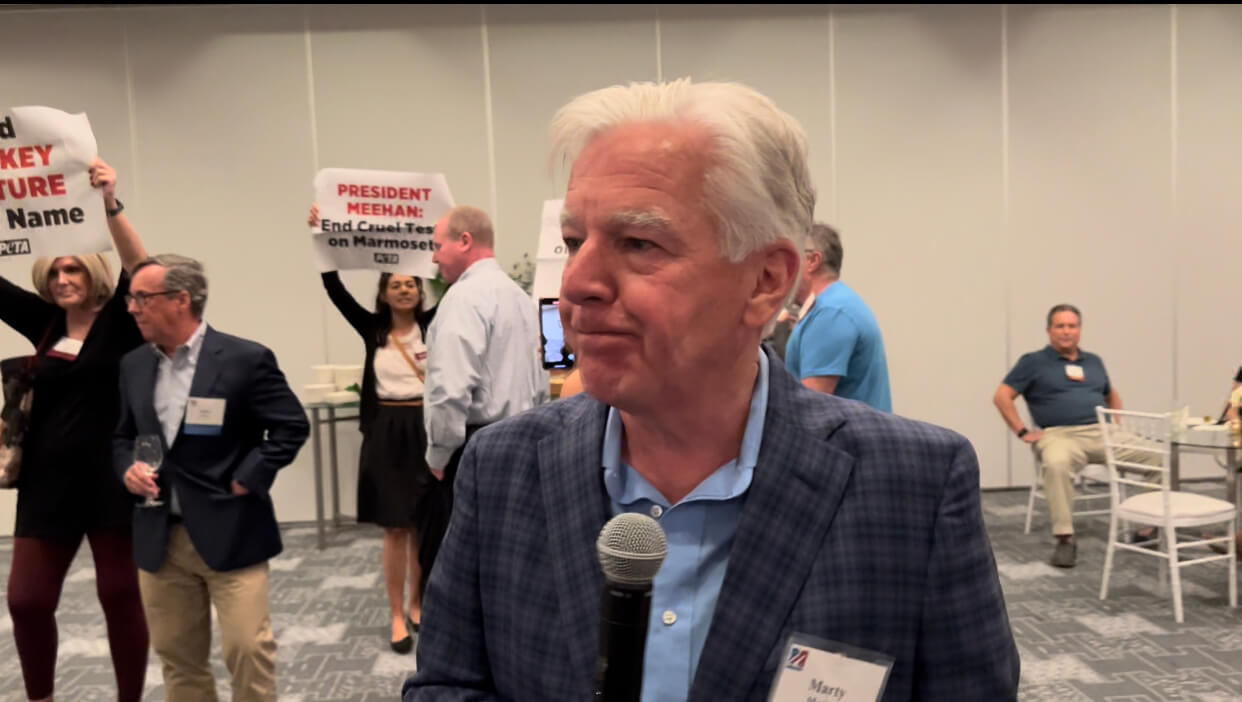 Dear UMass, Show Some Love for Monkeys by Shutting Down the Lab 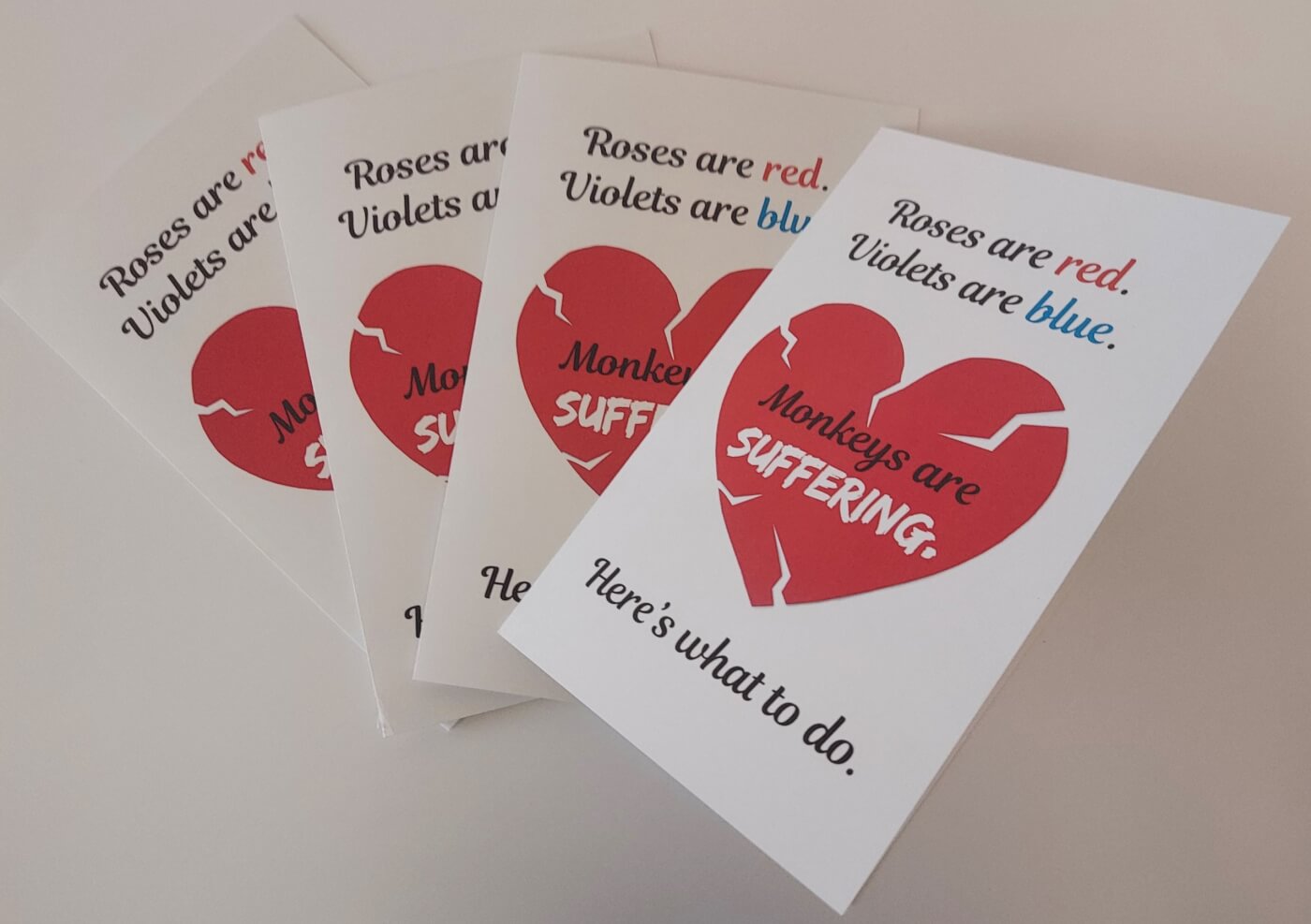 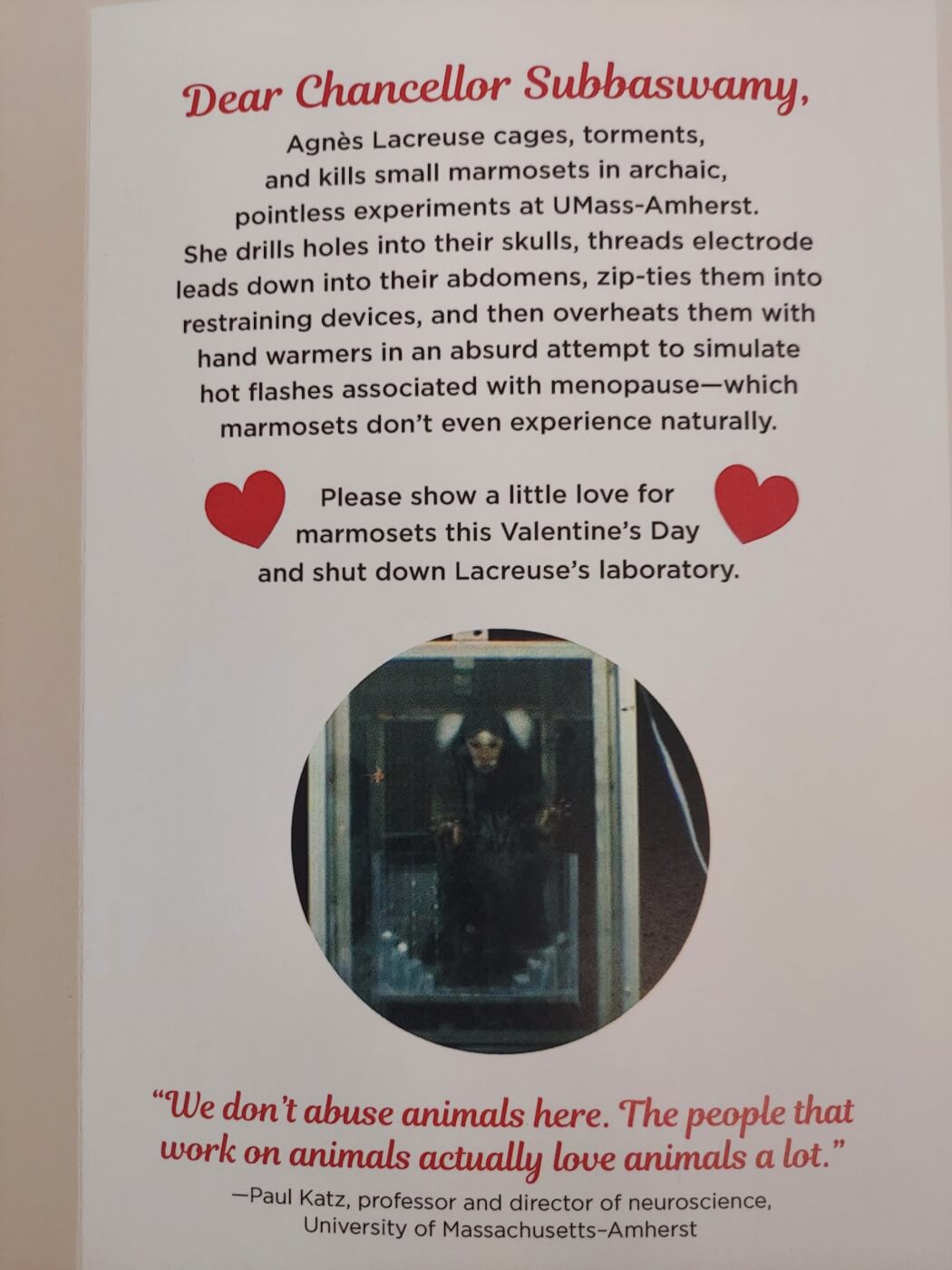 Students with UMass Students for Animal Liberation, members of Western Massachusetts Animal Rights Advocates, and PETA supporters mobilized at the Student Union to demand an end to useless and archaic experiments on marmoset monkeys. Protesters held eye-catching signs and passed out leaflets to students who were horrified to learn about the cruelty being inflicted on animals on their campus. 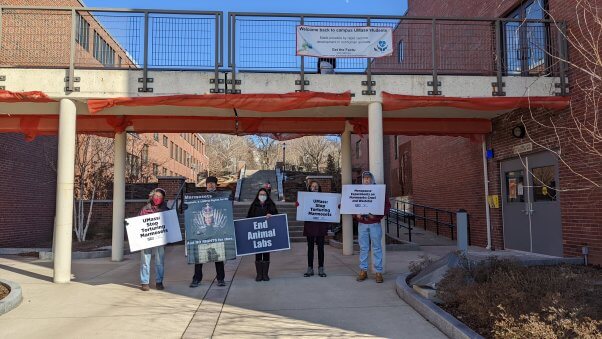 Could UMass finally have had enough sense to say NO to one of experimenter Agnès Lacreuse’s heinous experiments? Let’s hope so. Records obtained by PETA show that Lacreuse’s new torture test—in which she planned to blast monkeys with sounds as loud as a lawn mower for six minutes every 15 minutes throughout the night—will not be taking place at the university. Urge UMass officials to shut down the marmoset monkey lab here.

Experimenter Agnès Lacreuse and UMass students were welcomed back to campus for the spring semester with a mobile billboard revealing video footage of Lacreuse’s cruel, pointless, and deadly experiments on tiny marmoset monkeys. 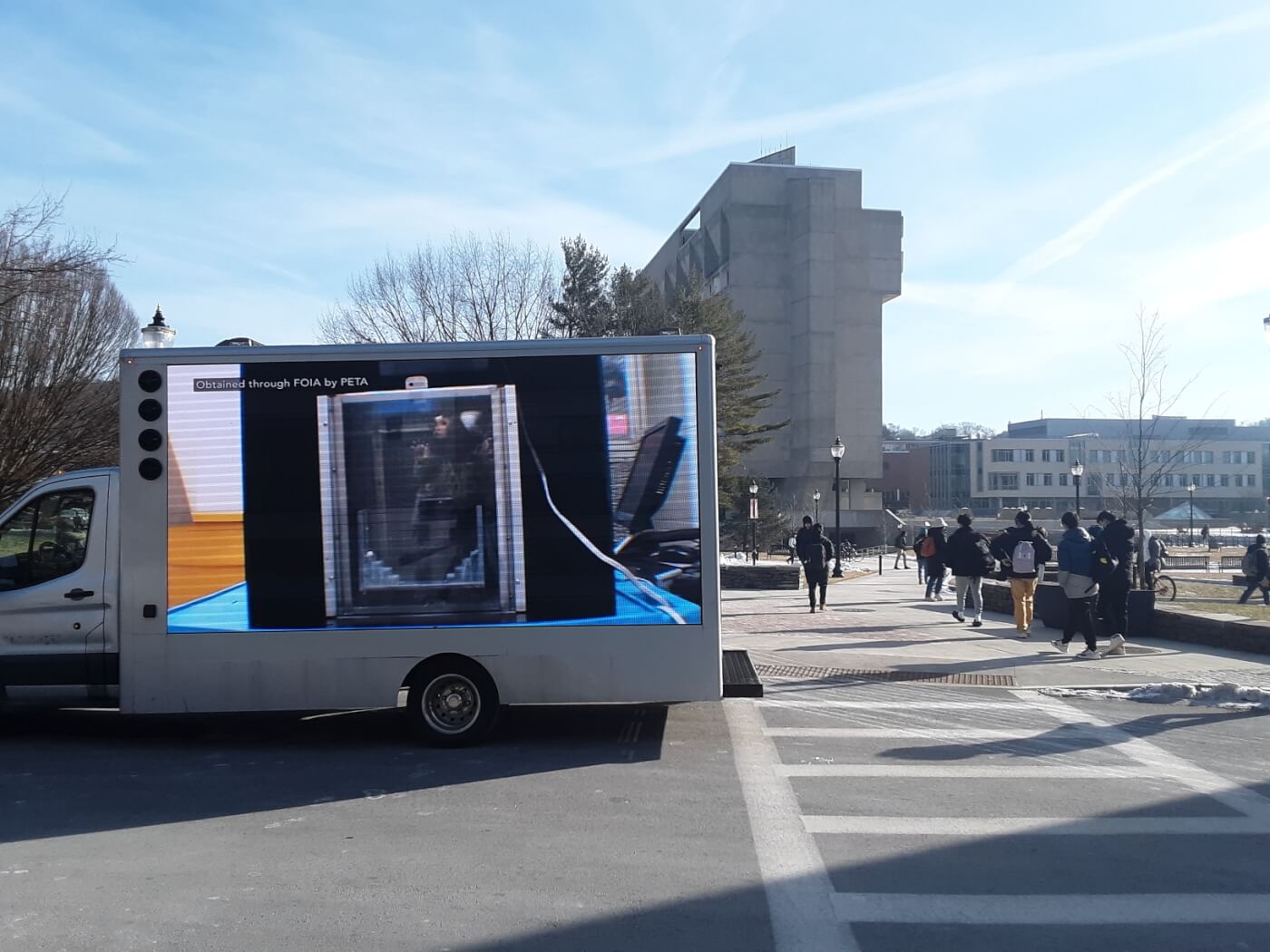 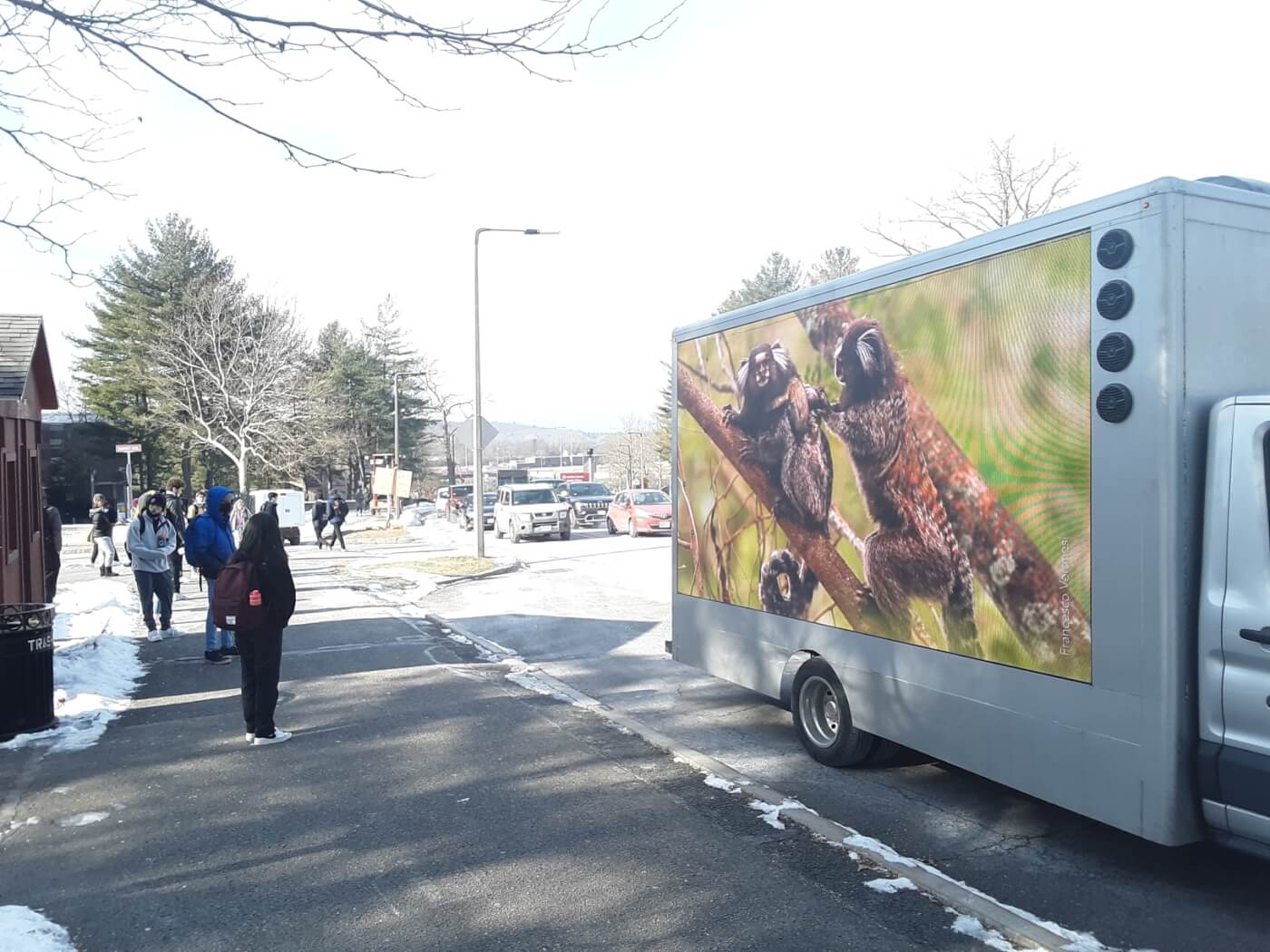 Ringing in the New Year With Chancellor Subbaswamy

The phones in the Office of the Chancellor at UMass were ringing off the hook this week from PETA supporters calling on Chancellor Kumble R. Subbaswamy to end the torment of marmoset monkeys in Agnès Lacreuse’s laboratory. We filled up his voicemail multiple times with messages urging him to end the torturous experiments and allow the monkeys to live the rest of their lives free from unnecessary pain. Use your voice today to call for an end to these archaic experiments.

Attempt by UMass to Stop PETA Protest During Homecoming Fails

UMass representatives informed PETA that our supporters would not be allowed to protest peacefully on the school’s public campus during this weekend’s homecoming events. But their attempt to silence us failed. A group of 20 supporters of PETA and Western Mass. Animal Rights Advocates gathered at a busy intersection and exposed the torment that monkeys endure in Lacreuse’s laboratory.

After Paul Katz, UMass professor and director of neuroscience, claimed that university experimenters “actually love animals a lot,” we ran a full-page ad in The Boston Globe revealing gross negligence in UMass’ treatment of monkeys. Public records obtained by PETA document federal animal welfare violations in the university’s laboratories, resulting in injuries and death for vulnerable marmosets and other animals—a perverse display of “love.” 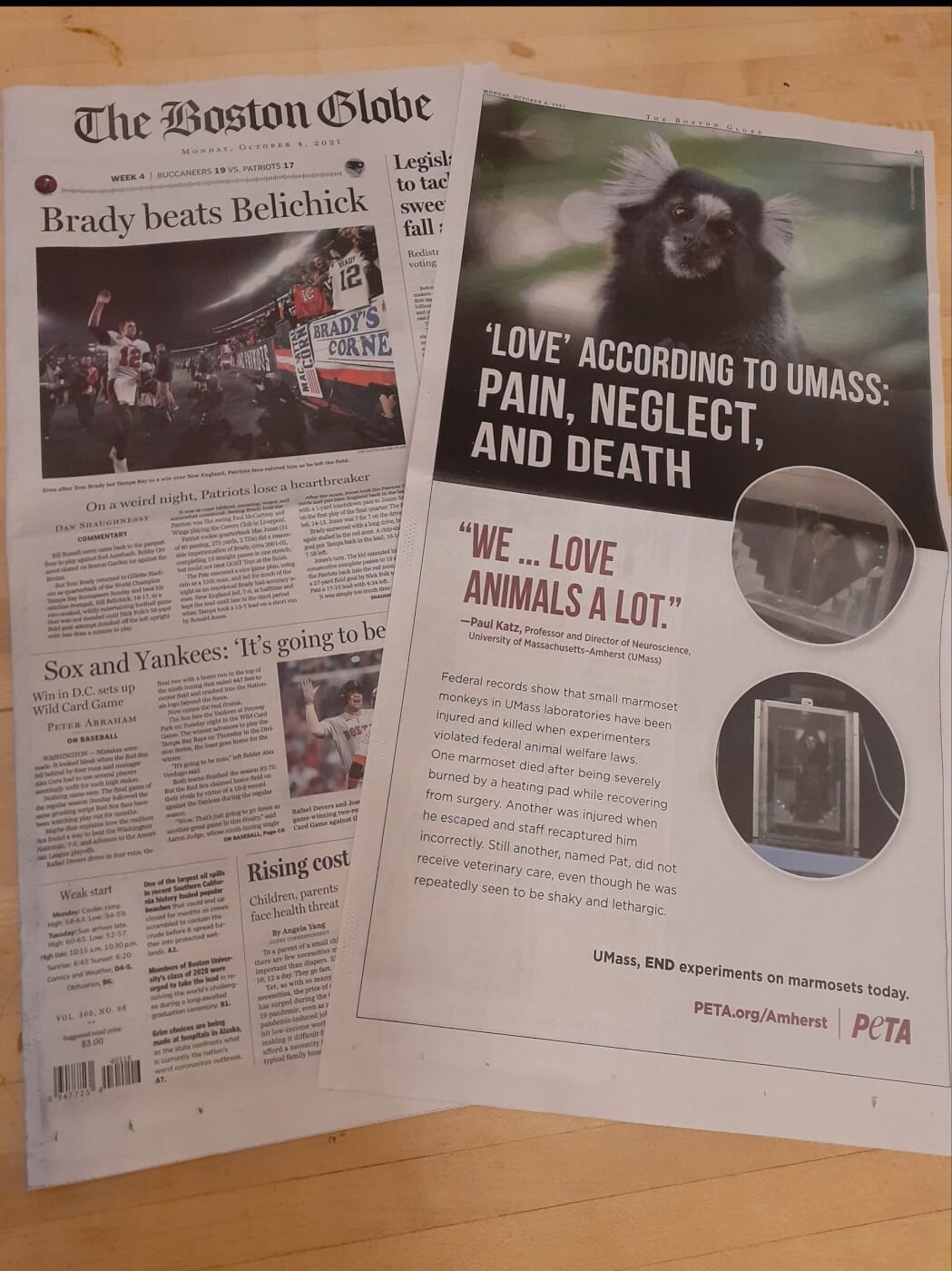 The World to Come star Casey Affleck and his mother, Chris Anne Boldt, joined PETA at UMass’ Student Union for a news conference to demand an end to the school’s deadly menopause experiments on marmosets. Immediately afterward, activists marched to the laboratory where the monkeys are being held captive, tormented, and killed. Read more. 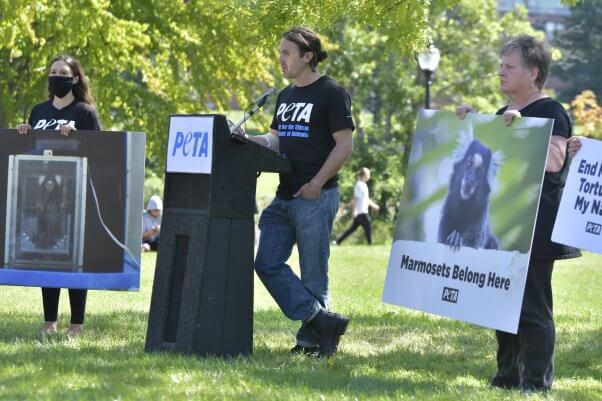 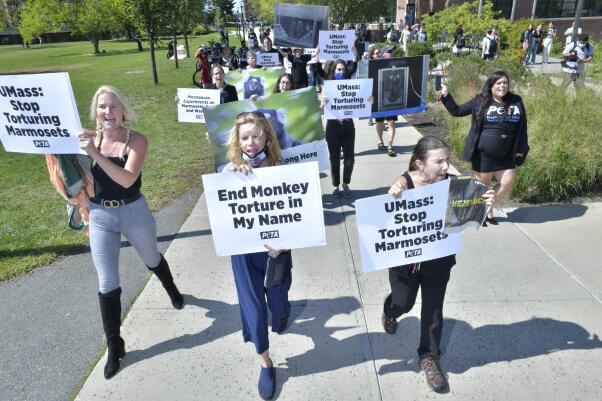 As UMass students hit the books, PETA’s ad calling out the university for its archaic menopause experiments on vulnerable marmosets hit the pages of the Amherst Bulletin. While UMass struggles to learn the basics—for instance, that faking hot flashes using hand warmers in monkeys who don’t experience menopause is patently absurd—other universities have increasingly advanced to using state-of-the-art, non-animal methods. 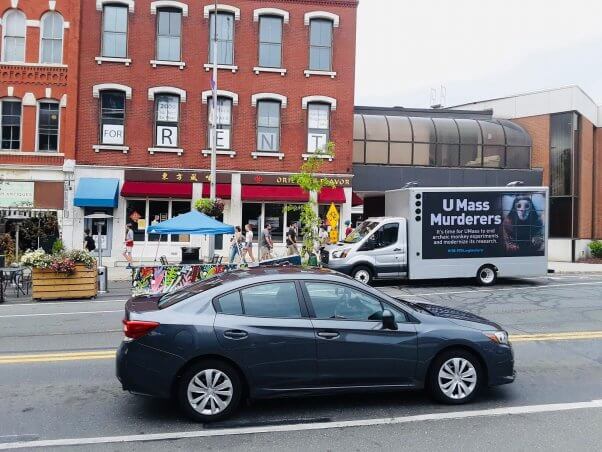 Animals imprisoned in University of Massachusetts–Amherst (UMass) laboratories—aka “hell on Earth”—endure horrors that would make Satan squeal with delight. Day-old baby mice drowned, zebra finches starved, and zebrafish died of overheating because of the negligence and carelessness of UMass employees, as documented in public records obtained by PETA. Read more about the diabolical cruelty in UMass laboratories.

Marmosets don’t experience menopause, but UMass experimenter Agnès Lacreuse has hauled in more than $3.8 million in taxpayers’ hard-earned money to play pretend. She’s devised a trick so preposterous that even the first graders sitting in the sandbox are giving her side eye: She uses hand warmers on the tiny monkeys to mimic hot flashes. Don’t miss the whispers in the schoolyard—get the scoop here.

PETA’s incisive full-page ads in The Boston Globe and the Daily Hampshire Gazette, which were seen by Massachusetts residents perusing their morning paper the weekend of May 15, pressure UMass to resume negotiations with PETA about swapping its archaic animal experiments for modern methods. University officials had previously met with PETA scientists to discuss reducing suffering in their laboratories but then slammed the door on further dialog. 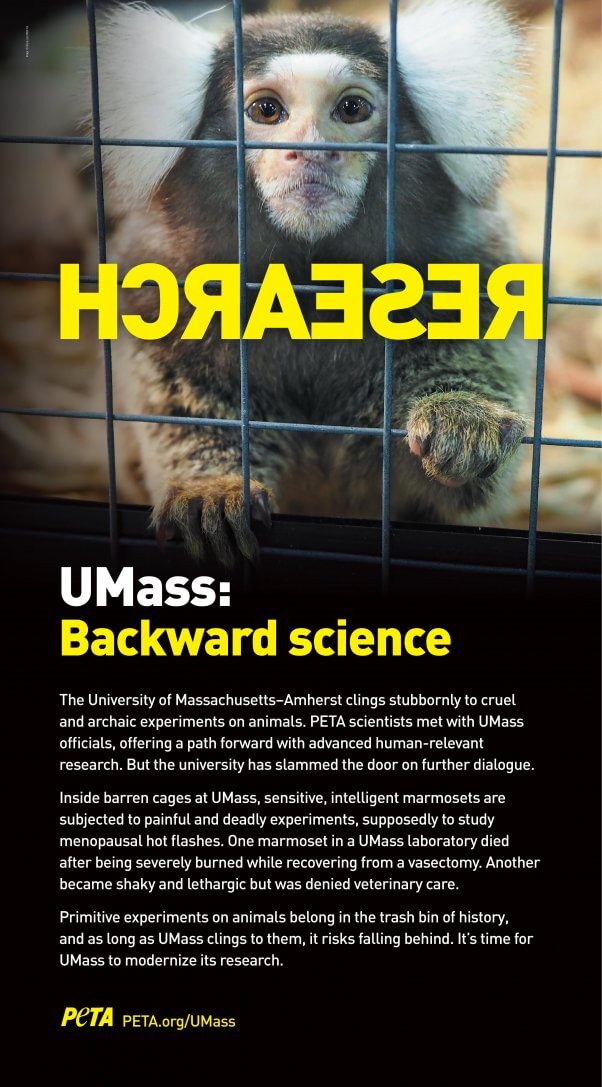 Spotlighting the stories of animals who have been cut open, poisoned, maimed, and killed in a century of painful and deadly experiments, PETA’s “Without Consent” exhibit challenges institutions—including UMass—to rethink this exploitative, expensive, cruel, and archaic idea of science and replace it with state-of-the-art, animal-free research. The traveling exhibit dropped by the Amherst North Town Common, but you don’t have to be anywhere near Massachusetts to view it virtually. 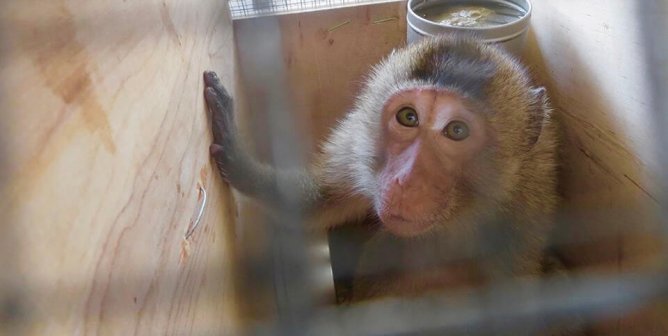 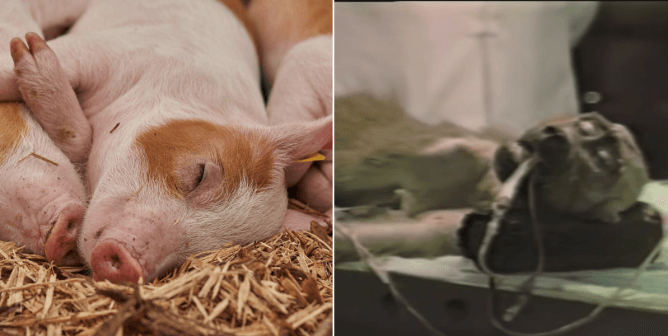