Update (July 11, 2022): PETA filed a complaint with the U.S. Department of Agriculture after obtaining federal documents that reveal experimenters at the University of Massachusetts–Amherst (UMass) kept young hamsters in constant, complete darkness for 200 days, even though the approved protocol outlined that the animals be deprived of light for only half that amount of time—which is cruel in itself. It seems UMass officials lack not only empathy but also willingness to follow the law. Read about other hellish UMass violations below, then take action to help the gentle marmosets who are tormented there.

We have enslaved the rest of the animal creation, and have treated our distant cousins in fur and feathers so badly that beyond doubt, if they were able to formulate a religion, they would depict the Devil in human form.

It’s a scene ripped from the pages of Dante’s Inferno: unabated misery, unrelenting darkness, and no escape.

But the beings condemned to suffer in this real-life hellscape aren’t souls atoning for their sins—they’re animals trapped in laboratories at the University of Massachusetts–Amherst (UMass).

University records obtained by PETA reveal horrors that could hardly be rivaled if Lucifer himself torched the place.

In one 2018 violation of animal welfare guidelines, eight mice—three adults and five babies who were just a day old—drowned when a leaking roof caused their cages to fill with water. Water from the leak also soaked mice in 15 other cages. That same year, eight zebra finches starved to death after laboratory workers forgot to put food in their cage. Staff were unable to determine how long the birds had been left with nothing to eat. 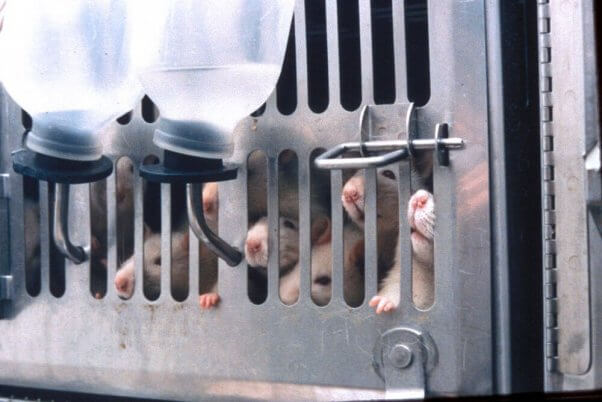 Mice in a laboratory

In 2019, 25 zebrafish died of overheating after a cooling system malfunctioned. Because UMass had also failed to ensure that a sensor in the room was working properly, laboratory workers didn’t notice soaring temperatures until it was too late.

And in a 2017 incident so heinous that the Devil’s right-hand demons would be impressed, experimenters failed to give necessary pain relief to several hundred mice—yeah, you read that right—who had just undergone surgery. For this egregious oversight, as with all the rest of them, UMass received little more than a slap on the wrist.

But UMass experimenters surely make Satan smile even when they’re following approved protocol. Consider, for example, the trauma inflicted on delicate marmoset monkeys: Experimenters cut out their sex organs, drill holes into their skulls, thread electrode leads through their bodies, zip-tie them into restraining devices, and—absurdly—overheat them with hand warmers to mimic menopausal hot flashes. That marmosets don’t naturally experience menopause hasn’t slowed down lead experimenter Agnès Lacreuse, who has hauled in more than $3.8 million in taxpayers’ hard-earned money to conduct the irredeemably cruel tests.

Hamsters at UMass aren’t spared, either.

Deliberately bred to develop early heart failure, the docile animals used in one protocol are left to languish without treatment for their agonizing and fatal condition. Some become so weak and lethargic that they cannot reach food or water and are forced to eat “moist nutritional gel” off the cage floor.

For other tests, experimenters leave hamsters in days- or weeks-long constant darkness, which they interrupt by flashing lights or shaking the animals’ cages to disturb their sleep cycle repeatedly and impair their heart function. When experimenters are finished with them, the small animals are killed.

It’s not only these hamsters who are living in darkness.

As long as UMass keeps the gates open to the pit of despair it calls animal laboratories, it, too, is in darkness—the moral and scientific kind. PETA scientists previously met with the university about ending some of its most devilishly cruel and useless experiments—specifically those on primates, including Lacreuse’s monstrous marmoset experiments—but it has spurned our attempts at further discussion. Join PETA in helping UMass to see the writing on the wall:

Urge UMass to Come to the Light