In the more than 40 years since our historic Silver Spring monkeys case—the groundbreaking investigation that first thrust animal rights into mainstream consciousness—we’ve kept exposing horrifying abuse, stopping deadly experiments, and championing modern, animal-free test methods. No animal rights organization in the world has done more to help animals condemned to laboratories than PETA. Here are just a few of the many animals we’ve rescued from labs:

4,000 Beagles Rescued From Envigo, a Factory Farm That Sold Dogs to Laboratories

With our groundbreaking undercover investigation that blew the lid off neglect, intense confinement, suffering, and death at Envigo’s massive beagle-breeding facility in Cumberland, Virginia, PETA helped spark a historic domino effect that paved the way for the closure of the dog prison.

Thousands of beagles were transported to shelters across the U.S. for rehabilitation and adoption, and 25 of the dogs bred at Envigo to be sold into experimentation were transferred to PETA for much-needed TLC and veterinary care—including baths, vaccinations, spay/neuter surgeries, dental cleanings, deworming medication, and microchips. We’ve placed them in prescreened homes to spend the rest of their lives free from desolate cages.

Sheena Was Rescued Because Someone Loved Her

When Sheena’s elderly guardian, Gayle, recognized that she didn’t have the resources to care for the dog properly, she made what she thought was the responsible choice: She took her to an animal shelter and hoped she would find a more suitable home. However, what Gayle didn’t know was that the North Utah Valley Animal Shelter voluntarily sold animals to the University of Utah (the U) to be used in experiments. Three weeks after dropping Sheena off, Gayle called the shelter once again and was horrified to learn that Sheena was no longer there—not because she had found a loving home but because she’d been sold to the U to be used in an experiment.

Gayle called PETA’s emergency hotline and learned that animals at the U are often surgically mutilated and then killed. She demanded that the U return Sheena to her, and with PETA’s help, Sheena was placed in a safe foster home. A PETA undercover investigation into the U led it to announce that it would no longer purchase animals from shelters for use in cruel experiments.

However, the animals who are still being exploited in laboratories around the U.S. are no less lovable than those in shelters or homes are. No one deserves to be used in cruel, needless experiments.

It Will Behoove You to Meet Marilyn and Madonna

Like Sheena, pigs Marilyn and Madonna were slated to be used by the U in experiments. Animals such as mice, rats, birds, and reptiles—who make up 99% of the animals used in experiments—receive no protection in laboratories from the Animal Welfare Act, the only federal law regulating the treatment of animals used there. Thankfully, PETA rescued the beautiful pigs. Now, they live at a spacious sanctuary and have left the horrors of the U in the dust—or mud, perhaps.

Beagles are one of the breeds frequently used in experiments because of their gentle and kind nature. Buddy and Cooper were two such sweet dogs, born into a multimillion-dollar industry that wanted only to profit from their bodies, ignoring the fact that they’re sentient beings. Rescued after a PETA undercover investigation into Professional Laboratory and Research Services, Inc., Buddy and Cooper were finally been able to live like real dogs—instead of being used in cruel scientific experiments—at Kindness Ranch. 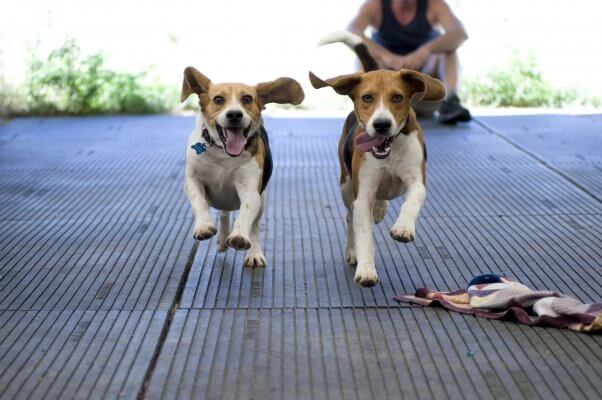 From (No) Wags to Riches: Samson’s New Life

Years before PETA’s investigation helped shut down Envigo, Samson was another beagle objectified for experiments, as he was used to sire more lab-bound dogs.  When first rescued, 8-year-old Samson shied away from human hands because he only knew them to be connected to things like a high-pressure hose that sprayed dogs and enclosures at the facility. PETA freed him from Envigo, and he now gets to experience kindness and respect for the first time in a home where people care for him.

Sarah, Peggy, and Siri are, like most sisters, vastly different from one another. Sarah is the nurturer, Peggy the adventurer, and Siri the inquisitive sniffer. All rats are intelligent, curious, and emotive animals, yet they’re commonly used in experiments because they’re cheap to breed and easy to handle. The sensitive heads of animals in the NIH-funded Cleveland Clinic were cut open and their brain tissue exposed with “cranial window” implants, and others suffered from large tumors and oozing wounds. Adorable Sarah, Peggy, and Siri were all in danger at the Cleveland Clinic, and many like them were experimented on there. Had it not been for a committed PETA investigator, their stories and unique personalities would have remained unknown.

Rescued From a Lab, Libby Got Her Dog Days

Kept alongside animals infected with parasites to test companion animal products, Libby was known only by the letters tattooed on the underside of her ear. She was one of nearly 250 dogs and cats rescued after PETA’s investigation into Professional Laboratory and Research Services, where animals endured repeated exposure to worms and other parasites so that harsh chemicals meant to treat these infestations could be smeared on their skin or put in their food. After a PETA investigator recorded workers throwing, hitting, and dragging dogs; grabbing puppies by their throats; and screaming obscenities at the animals, the facility was investigated and shut down. When PETA rescued Libby, she was suffering from hookworm, tapeworm, and a vaginal infection and had several rotted teeth. Free from the torment of the painful experiments and met with love and compassion for the first time, Libby was able to blossom into a happy, healthy dog. She became part of a three-dog family and learned how to play, run, and snuggle.

A PETA investigator documented widespread animal suffering in University of North Carolina–Chapel Hill (UNC) laboratories. The investigator saw one experimenter needlessly kill 23 mice in a row with a metal cage-card holder and a second experimenter douse 8-day-old rat pups with ethyl alcohol and then sever their heads with scissors. Thankfully, the damning evidence collected by our investigator led NIH to agree that the UNC experimenters had been improperly trained, had caused animals pain and distress, and had committed many other violations. PETA’s investigator rescued Tulip, a black mouse with large ears. While Tulip undoubtedly had a rough start, she was able to spend the rest of her life in a warm, safe home with plenty of opportunities to explore and burrow. 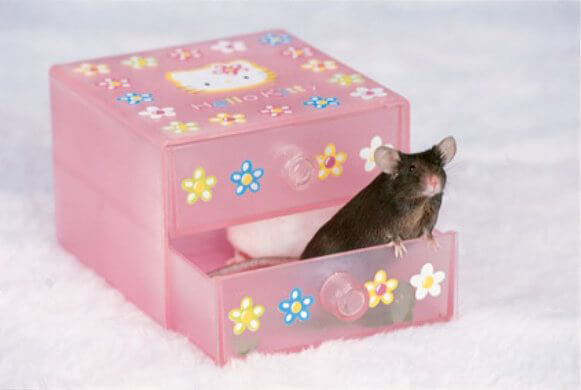 All animals deserve respect, protection, and love, yet hundreds of millions of them are used for and abused in cruel and pointless experiments in the U.S. every year. It’s speciesist to believe that the animals who end up in laboratories are any different from the cats and dogs with whom many people lovingly share their homes. While many of the animals used for testing are killed and discarded, some have been able to escape the torment with help from PETA. Now, they get to adapt to living for themselves—not for human exploitation.

Everyone can help prevent further animal suffering by buying only cruelty-free products, donating only to charities that don’t fund experiments on animals, requesting animal-free dissection, and demanding the implementation of humane, effective, non-animal tests by government agencies, corporations, and—in many cases—their own alma maters. If you live in the U.S., please take a moment to help encourage NIH to embrace a kind future: