Update (September 9, 2022): Months after PETA’s groundbreaking exposé, Envigo’s dog-breeding hellhole is shutting down and all the beagles are free from its cages. But our work isn’t finished yet.

ALL 4,000 BEAGLES HAVE NOW BEEN RELEASED FOR ADOPTION!

Not long ago, the world had no idea that thousands of beagles were suffering behind closed doors at Envigo—now, they’re free from cages. pic.twitter.com/m2bcbhb15K

Please continue to make your voice heard for the dogs who suffered and died at this prison-like breeding facility that sent animals to laboratories. Demand that the U.S. Department of Agriculture finally suspend the company’s license to operate, preventing more animals from enduring the same fate!

Update (August 24, 2022): One of the 4,000 dogs who was rescued following PETA’s undercover investigation into Envigo—7-year-old Mia—has found her home with royalty. Mamma Mia has left behind cold metal floors, neglect, and a potential lifetime as a test subject, and she will receive the full royal treatment in her new life with the Duke and Duchess of Sussex, Prince Harry and Meghan Markle. Earlier this month, PETA gave 25 beagles—who were also bred at Envigo to be sold into experimentation—some much-needed TLC and veterinary care, including baths, vaccines, spay/neuter surgeries, dental cleanings, deworming medication, and microchips. The dogs have been placed in loving, permanent homes or caring temporary foster homes while they await placement with their new pre-screened families. PETA staff also transported 13 puppies and four adult dogs to our shelter partner the Virginia Beach SPCA.

With our groundbreaking undercover investigation that blew the lid off neglect, intense confinement, suffering, and death at Envigo’s massive beagle-breeding facility in Cumberland, Virginia, PETA helped spark a historical domino effect that paved the way for the closure of the dog prison.

Desperate Dogs Warehoused and Bred in Prison-Like Mill That Sells Them for Experimentation | PETA Investigates from Official PETA on Vimeo.

Within a few months, our 2021 exposé was followed by the execution of a search warrant that resulted in law-enforcement officials’ seizure of nearly 450 dogs and puppies “in acute distress,” federal citations for dozens of violations of animal welfare laws, and a legal battle with the Department of Justice (DOJ ). No more dogs will be bred and born at this beagle factory farm, but we aren’t popping champagne corks just yet—Envigo’s $330 million parent company, Inotiv, is fighting to profit off more than 500 beagles still imprisoned at the site by selling them to laboratories.

Keep reading to see how the beagle breeding operation came crashing down.

Many dogs “suffered from severe dental disease, including gingivitis, premature gum recession, and infections,” likely because of “poor nutrition and/or the failure” to provide them with adequate dental care. 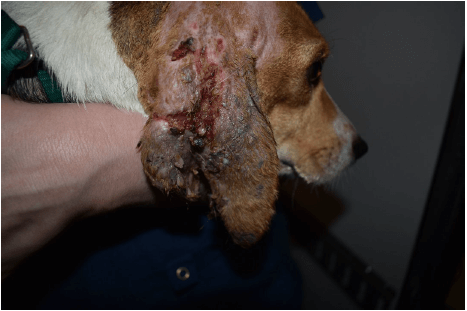 This female beagle’s ear was infected and shredded, and many other dogs had recent or old ear wounds. 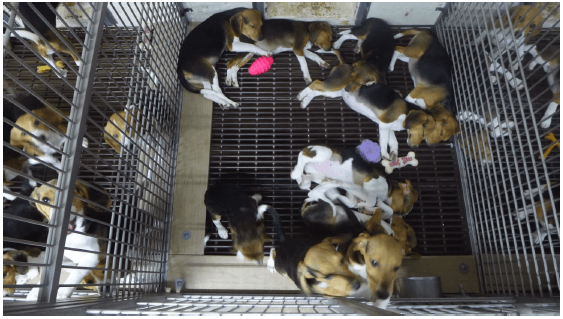 Enclosures were severely crowded, many containing four or more beagles and some containing as many as 10. 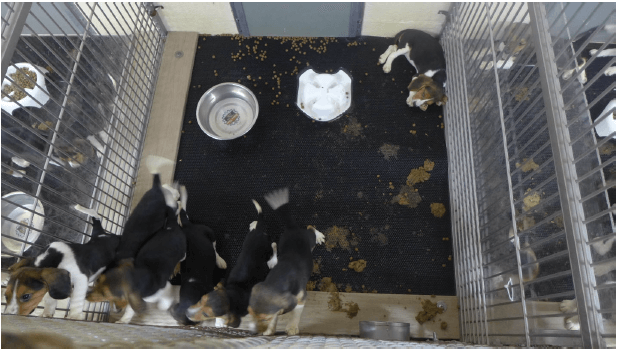 Some enclosures contained food bowls with kibble, but the bowls could be turned over by the dogs, “exposing the food to the feces on the mats.”

Please continue to make your voice heard for the dogs who suffered and died at this prison-like breeding facility. Demand that the U.S. Department of Agriculture finally suspend the company’s license to operate, preventing more animals from enduring the same fate!