You did it! We asked you to call and e-mail and demand that two healthy dogs who have spent nine years inside canine muscular dystrophy laboratories finally be given a chance to live in a home, and Texas A&M University (TAMU) has listened! Records just obtained by PETA show that Lucilla and Varinia were adopted. Another dog, named Cheddar, has also been placed in a home. The documents indicate that there are just 25 dogs remaining in the infamous laboratory. However, a dog named Jambi is missing from the records that we’ve received, so we’re questioning TAMU about that. We won’t leave any dog behind.

PETA has offered to take all the dogs still imprisoned by TAMU. Please ask it to release them now by taking action below:

Urge TAMU to Release These Dogs Into Good Homes

Peter Nghiem and his fellow experimenters at Texas A&M University (TAMU) have tormented and killed hundreds of dogs in useless canine muscular dystrophy experiments. We have to get this laboratory shut down, and we have to get the dogs still imprisoned there out. Meet Cannoli, Lucilla, and Varinia, and help PETA demand their freedom.

Cannoli was born into the dog hellhole at TAMU in September 2018. His father, Lunes, died in the lab under questionable circumstances that led PETA to file a complaint with the U.S. Department of Agriculture and call for an immediate investigation. Before his death, Lunes’ sperm was routinely taken and used to inseminate female dogs, including Cannoli’s mother, Jan. To the disappointment of the experimenters, Cannoli was born without canine muscular dystrophy and didn’t carry the gene for it. So while he was still just a puppy, he was used as a healthy control in experiments and subjected to what experimenters euphemistically call “force measurements.”

Laboratory documents obtained by PETA don’t provide many details, but based on the nature of the experiments, we believe that Cannoli was tied to a machine that painfully stretched and damaged his muscles and was then subjected to biopsies in his right leg. 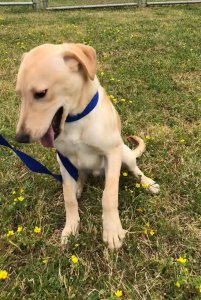 Cannoli was born in captivity in TAMU’s canine muscular dystrophy laboratory. This healthy young dog was eventually put up for adoption but then betrayed: Instead of allowing him to go to a loving home, he was sentenced to further imprisonment and pain in a toxicology laboratory.

In May 2019, pro–animal-testing group Homes for Animal Heroes listed Cannoli on its website as being available for adoption. But the group didn’t place him in a home. Instead, in a move that is outrageous even by TAMU’s standards, the school betrayed him by moving him to a toxicology laboratory to be used in more crude experiments and most likely eventually killed. PETA fired off a letter to TAMU administrators asking what’s happened to him, but we’ve received no answer.

Sisters Lucilla and Varinia were another disappointment to experimenters. They were also bred to have canine muscular dystrophy but, like Cannoli, were born without it. At birth, their third sister was gasping and struggling to breathe and was killed at just a day old. She was never even given a name. Lucilla and Varinia do carry the muscular dystrophy gene, however, so they were of some value to experimenters: They could be used as breeding machines.

At 3 months old, both pups were already suffering from intestinal parasites, hair loss, and lesions or scabs on their ears. Varinia grew painfully thin, and Lucilla developed a benign mammary tumor, which experimenters believe was caused by a false pregnancy. 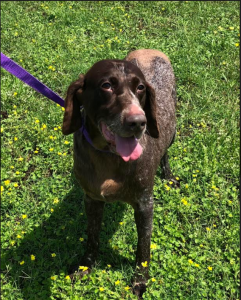 Lucilla, like her sister Varinia, both almost 9 years old, has known nothing but a life of deprivation in the laboratory. Records show that during most of 2019, experimenters allowed her out of her barren cage only about three times per month.

Over the past nine years, these beautiful German shorthair pointers have likely been subjected to painful and invasive artificial insemination dozens of times and have probably given birth to multiple litters of puppies used as laboratory equipment by experimenters. 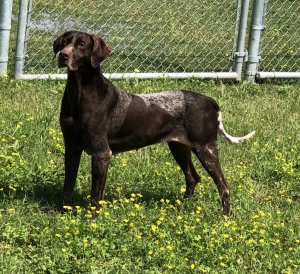 Varinia, along with her sister Lucilla, has been caged in laboratories for her entire life. During that time, she has suffered from weight loss, intestinal parasites, and hair loss. She has probably been used by experimenters as a breeding machine in hopes that she would give birth to puppies with canine muscular dystrophy who could be used in experiments.

They’ve been advertised as being available for adoption, and we need to make sure they do get good homes. We have good reason to worry about Varinia and Lucilla. When Pamela Anderson recently offered to adopt all the dogs in this laboratory her generous offer was met with silence from TAMU.

In nearly 40 years, these kinds of abusive and deadly experiments have failed to produce even one single treatment that reverses symptoms of muscular dystrophy in humans. They’ve continued for the sake of a few experimenters’ academic careers and a handful of published papers.

Humans and dogs have a bond that goes back centuries. We constantly see news reports of dogs who have saved their guardians from fires, drowning, and more. The first blind Appalachian Trail thru-hiker finished the trail with the help of his canine companion. A bloodhound’s sense of smell is so distinguished that it can be admitted as evidence in court cases, helping to put criminals behind bars. George Lucas created the Ewoks in Star Wars based on his dog. Devoted dog guardian—and outspoken TAMU dog lab opponent—Paul McCartney added a frequency into The Beatles’ song “A Day in the Life” that only dogs are able to hear. Everyone who has shared his or her life with a dog knows that these brilliant, thoughtful animals are fiercely devoted to their families. The experimenters at TAMU are betraying “man’s best friend.”

It’s time for Cannoli, Lucilla, Varinia, and all the other dogs still trapped at the school to be given a chance at adoption and an opportunity to spend their remaining years enjoying the kind of life that every dog deserves.

Urge TAMU to Release These Dogs Into Good Homes