Because of the kind support of our members and donors, many, many animals were rescued by PETA from abusive conditions this year and adopted by loving caregivers. Animals like Charley, who was abandoned at a vacant property and discovered in an old silo with a broken foot:

These disoriented and injured pelicans were rescued from a bridge during Hurricane Dorian:

Brothers Jack and Ben were being given away outside a dollar store but were thankfully scooped up by a kind woman who called PETA:

Kate and Rooney were abandoned in a crate outside PETA’s headquarters, and we took them in: 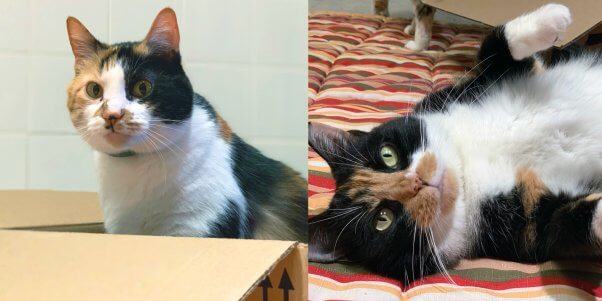 Neglected, perpetually crated dog Murphy had fur that was so matted, we could barely tell he was a dog:

Badger was more than 400 pounds underweight before he was rescued by PETA and adopted by an adoring family who gave the horse a beautiful new name, Dakota:

And we helped Dylan, who made his way to a kind stranger’s porch with a massive wound on his neck:

Here’s a fond look back at these and some of our other favorite rescue stories from 2019:

Every day, our fieldworkers travel for hours throughout the rural areas of Virginia and North Carolina surrounding the Sam Simon Center—PETA’s Norfolk, Virginia, headquarters—helping animals in need. They provide veterinary treatment, basic preventive medical care (like dewormer, flea treatment, and flystrike prevention), and food and water receptacles—regardless of the owners’ ability to pay. Fieldworkers give dogs sturdy custom-built doghouses, insulating straw bedding to keep them dry and less cold during the winter, and lightweight tie-outs to replace heavy chains. They urge families to bring dogs indoors where they belong. And PETA spayed and neutered more than 12,000 companion animals in 2019 alone.

All these heartwarming stories along with our many other victories this year were made possible by the generous support of our members and donors. If you haven’t officially become a PETA member yet, consider joining us in 2020. A donation of just $16 gets you a year of member benefits, including four issues of PETA Global magazine, which is packed with inspiring rescue stories, campaign updates, tasty recipes, and easy advocacy ideas. If you’re already a PETA member, consider giving a loved one a gift membership or a PETA Present this holiday season.

On behalf of all the animals we helped together in 2019, thank you!