As part of our campaign to get Starbucks to stop charging up to 80 cents extra for vegan milk, we’ve purchased the minimum number of shares in the company to attend and speak at Starbucks’ annual meetings.

Sometimes, the best way to influence a company is from within.

Many coffee drinkers are lactose intolerant, and everyone should be intolerant of cruelty to cows, which is why charging extra for vegan milks is hard to swallow. We’re heading to Starbucks’ boardroom to urge the company to end this unfair surcharge. 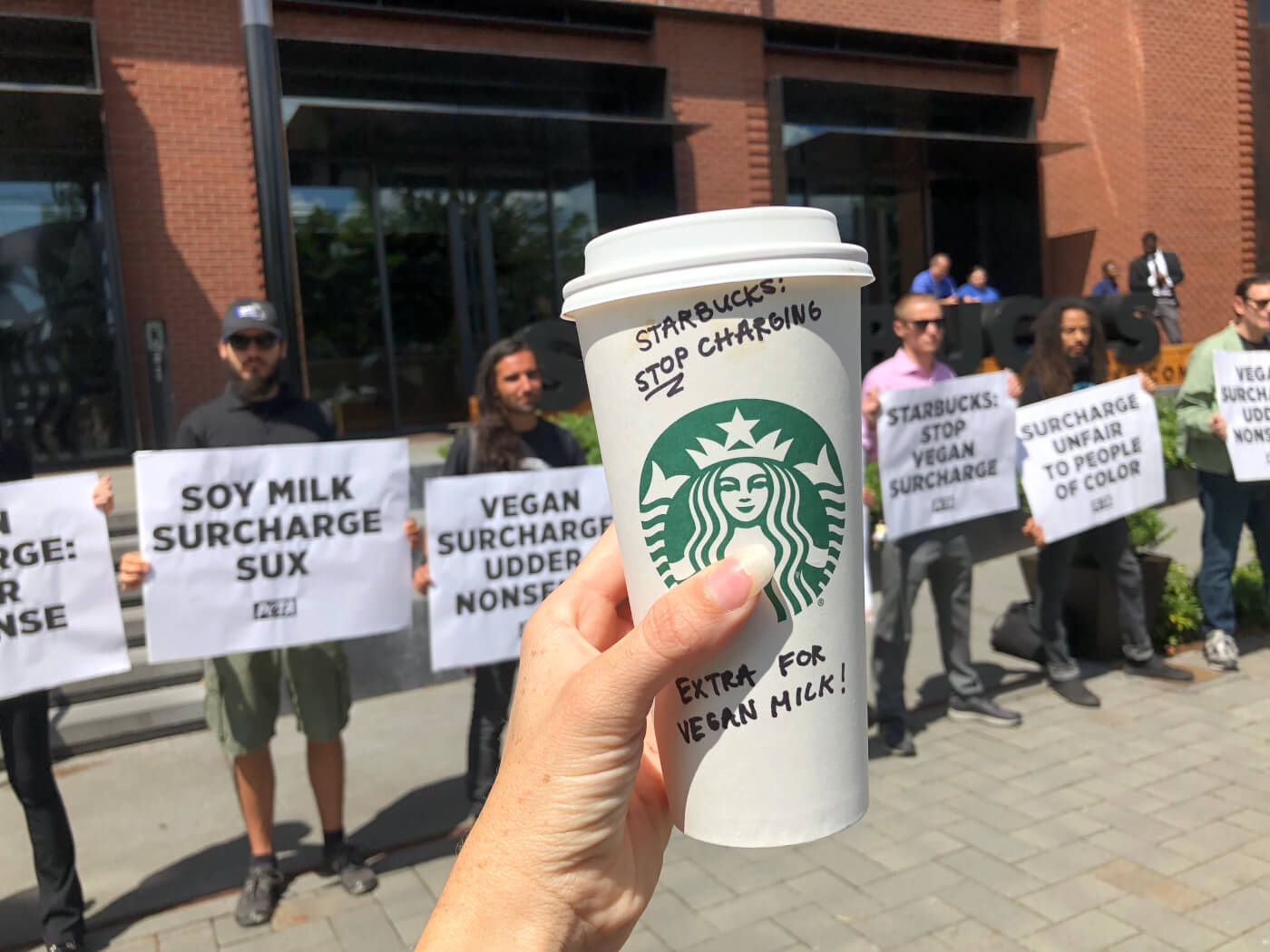 In today’s dairy industry, cows are artificially inseminated (raped via an inserted syringe) and calves are torn away from their loving mothers within a day of birth.

Mother cows have been known to wail for their calves for days after separation. Male calves are often slaughtered for veal, and females are eventually sentenced to the same miserable fate as their mothers and then killed when they stop producing enough milk to be profitable.

Help Us Help Cows Used and Killed for Dairy

We’ve been busy urging Starbucks to do better. Earlier this year, activists gathered outside its headquarters in Seattle holding signs proclaiming, “Soy Milk Surcharge Sux,” “Vegan Surcharge: Udder Nonsense,” and “Surcharge Unfair for People of Color,” to make it clear that animal rights advocates, lactose-intolerant coffee drinkers, and environmentalists want the chain to dump its surcharge for adding dairy-free milk to a drink. We were also there when the largest Starbucks location in the world opened its doors last month—PETA activists sat inside with signs for eight hours.

LIVE IN CHICAGO: PETA activists are at the grand opening of the biggest #Starbucks in the WORLD in #Chicago to urge the company to drop the vegan upcharge!

Posted by PETA (People for the Ethical Treatment of Animals) on Friday, November 15, 2019

Other peaceful PETA supporters have been sparking important conversations at their own local Starbucks stores.

How can you get @Starbucks to stop charging extra for #vegan milk?

Set up shop at your local store with signs like these compassionate activists did! pic.twitter.com/KM9dSMs7Ox

Countless letters have been sent to Starbucks using our action alert to ask that the company stop charging extra for dairy-free milk. Have you taken action?