The 2020 Iditarod race is now officially over. The last musher, Kaci Murringer, crossed the finish line with exhausted dogs in tow this afternoon.

Below, you’ll find a roundup of horrific incidents that occurred during the 2020 Iditarod, which shows why PETA and concerned people everywhere are calling on this cruel event to end:

These instances are in addition to ongoing complaints surrounding the Iditarod, including the deaths of more than 150 dogs since the race began.

From vomiting and frostbitten dogs to exhaustion, illness, and injury so severe that dogs were removed from the trail, the 2020 Iditarod stayed the course in terms of cruelty. Dogs will suffer horribly as long as this despicable race continues, which is why PETA is calling for this year to be its last.

PETA notes that forcing dogs to run hundreds of miles through ice and snow for a musher’s prize purse is a form of speciesism, a human-supremacist worldview. This event is truly a matter of life or death for dogs.

For full coverage of the events described above, continue reading.

The deadly race continued on March 20 as three mushers called for rescue from the Alaska National Guard when they realized part of the trail was flooded. In the dark, they apparently couldn’t see that the trail was blocked by seawater overflow, so the dogs ran through part of it. Rescuers reportedly found the mushers in sleeping bags, and they required oxygen. But there was no word as to the conditions of the wet dogs in the below-freezing temperatures.

And that’s not the only dangerous spot dogs are in. Musher Nicolas Petit—who previously admitted that all the dogs he forced to race were vomiting, three had frostbite, and one almost needed stitches—scratched on March 17 when he sent out a distress call after getting lost in a blizzard. Eleven other mushers are stuck in Elim waiting out a “nasty storm,” yet Petit evidently still plans to force the dogs to run all the way to Nome.

And after musher Richie Diehl scratched on March 16, he said that one of the dogs he used, Magic, had a “slight cough.”  But soon, veterinarians said that four more dogs had coughs and that they along with Magic were showing signs of the beginning stages of pneumonia.

Betty, one of the dogs musher John Schandelmeier used, was in critical condition as of March 20 with pneumonia and had been on oxygen for at least 36 hours at an emergency clinic. Schandelmeier’s wife, Zoya, said that two dogs they used, Thunder and Charlotte, had fevers, weren’t eating, and had “diarrhea, consistent coughing and noses full of slime.” When she picked them up, she said, “I didn’t even recognize my own team. [They] were so gaunt, still, weak and fading.”

It’s past time for the Iditarod to end. Stay tuned for more news from this year’s dangerous and deadly race, and help dogs today!

Thomas Waerner’s ‘win’ of the 2020 Iditarod this morning is cause for reflection, not celebration.

With approximately 180 dogs pulled from the Iditarod so far because of exhaustion, injuries, and illnesses such as life-threatening bloat—and mushers forcing dogs to continue in the face of vomiting and frostbite, sled fires, and last-minute substitutions—no musher’s finish warrants a celebration. When Waerner left behind four dogs he pushed beyond the breaking point during the race and chains up dogs desperate for love and warmth next to wooden boxes in the snow, it’s clear why PETA’s call for this despicable race to end is spot on.

Update: March 17, 2020
Mitch Seavey previously admitted to beating, depriving, and neglecting dogs and PETA’s exposé of his facility found dogs chained up and even killed during training, so new reports that he threw a dog down and pinned her muzzle to the ground during this week’s race come as no shock. Just as some hunters are appalled by canned hunts, Iditarod supporters seem to be speaking out against behavior that even they deem to be cruel—and if this insider’s allegations are true, Seavey should face a police investigation and be banned from racing. Regardless, it is time for the cruel Iditarod to be relegated to the history books. 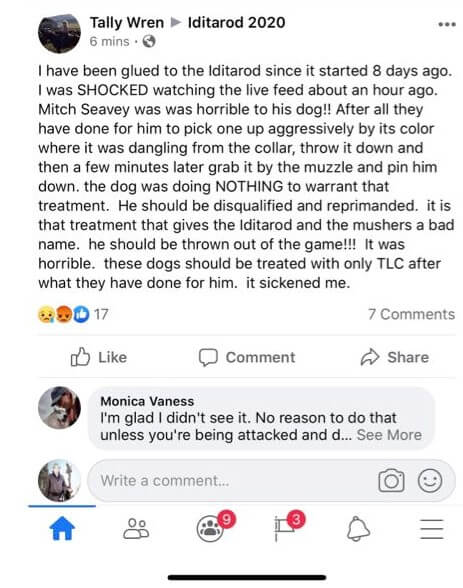 Following a massive PETA campaign, Anchorage Chrysler Dodge Jeep Ram Center—an independently owned FCA dealership that has sponsored the Iditarod since 2007—will drop its support of the race after this year’s event.

But our work isn’t done yet. Dogs are still suffering. Keep reading to learn more about this year’s race and find out how you can take action to help them today.

2020 Iditarod musher Matthew Failor is facing heat after one of the dogs he uses, Cool Cat, nearly died from a painful condition called bloat. Failor forced this senior dog to run hard, and she developed twisted intestines and almost died. Instead of staying with her while she recovered, he kept right on racing for the cash prize.

Unsurprisingly, Failor appears to keep the dogs at his facility chained to boxes, a practice previously revealed in PETA’s exposé of former Iditarod champion mushers’ facilities.

For some dogs forced to run the deadly sled race, the 2020 Iditarod truly just became a trial by fire. According to a video released by Anchorage-area NBC affiliate KTUU, current Iditarod leader Jessie Royer accidentally set her own sled on fire sometime before reaching the checkpoint in Ruby, Alaska. In the clip below, she admits that the fire burned a bag of protective snow booties that dogs wear on their feet along with other supplies. It’s unclear from the interview if she has more booties for her dogs to wear.

When Royer became the first musher to arrive at the Ruby checkpoint, she was greeted with a five-course “gourmet meal” and a bottle of Dom Pérignon. Meanwhile, her dogs were left outside in the cold, prohibited from taking shelter, waiting for whatever might come next.

Animals aren’t sporting equipment. They aren’t tools, and they aren’t gourmet meals, either. It’s speciesist to believe that some animals are servants, some are soup, and only a select few are worthy of our consideration and empathy. Dogs forced to run the Iditarod are no different physiologically from other dogs.

It’s only a matter of time before an exhausted musher makes another careless mistake that could cost a dog their life.

Despite initial reports that Nicolas Petit would scratch from the Iditarod after admitting that all the dogs on his team vomited and that three of them had frostbite, it now seems clear that he is forcing them all to continue. 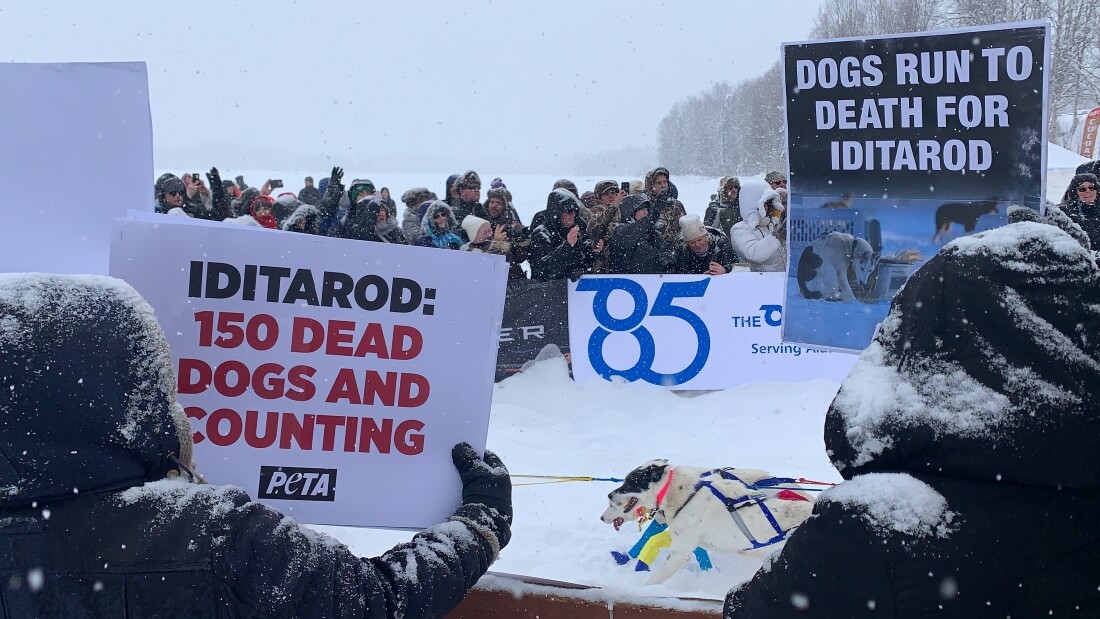 In an interview, Petit described what had happened on the trail, saying, “Oh, another one pukes, oh, then another one is puking,” and he admitted that he had had to slow down out of fear that one of the dogs would choke if he or she threw up while panting. The leading cause of death for dogs on the Iditarod trail is aspiration pneumonia caused by inhaling their own vomit.

Petit also stated that one dog bit another one on his team in the face so severely that the wound nearly needed stitches.

Last year, Petit was a frontrunner in the race until his dogs refused to continue running. Illness, injury, or exhaustion likely prompted him to drop four dogs from his team. This meant that the remaining 10 dogs were forced to work even harder—before they gave up altogether.

Everyone should be asking the Iditarod why these dogs are still being forced to run. If Petit cared about these dogs, he wouldn’t be forcing them to run a 1,000-mile race in which they die, year after year. He’s seen firsthand how devastating this race is for dogs, yet for some reason, he continues to torture them in this frozen hellscape.

Musher John Schandelmeier claims that he has no desire to force dogs to race or to finish the deadly Iditarod, which begs the question, “Why not spare the dogs and yourself the misery and just drop out now?”

Schandelmeier became a last-minute substitute for his wife, Zoya DeNure, who dropped out because of a heart condition. He has already suffered frostbite on his hands and toes and has a lingering leg injury as a result of a bacterial infection from last year. How can he be expected to care for the dogs during the next several hundred miles of dangerous trial?

“It’s not like, ‘Oh, I want to run the Iditarod.’ I’ve never had that desire. It’s not something on my wish list,” said Schandelmeier, according to Anchorage Daily News.

You may remember that DeNure came forward to report that some trainers in the industry kill “hundreds on top of hundreds or more dogs” because they don’t run fast enough to make the team. She called out musher Dallas Seavey’s kennels as being among those that kill dogs who aren’t fast or fit enough and wrote, “Sadly, this has been going on in the family ‘dynasty’ for decades.”

In other developments, 79-year-old Jim Lanier scratched “after concerns for his own well-being” according to Iditarod officials. He was originally banned from the Iditarod this year over concerns for his health and his ability to care for his dogs during the race. A petition from mushers and fans compelled the Iditarod to reverse his ban. Apparently, none of these petitioners cared about the well-being of the dogs. Lanier didn’t race last year, but in 2018 another musher came across him stuck and starting to freeze.

Another musher, Tom Knolmayer, suffered frostbite in his eyes as temperatures on the trail dropped to -30 degrees. While Knolmayer gets to sleep indoors at the checkpoints, the dogs are forced to sleep outside in these subzero temperatures. Knolmayer’s vision is likely obscured which puts him and the dogs he’s forcing to run at risk.

The 2020 Iditarod death race has begun. For roughly two weeks, hundreds of dogs will be forced to run about 1,000 miles through biting winds, blinding snowstorms, and subzero temperatures. The race will leave sensitive dogs bloodied, sick, and forever scarred, if they make it back at all. 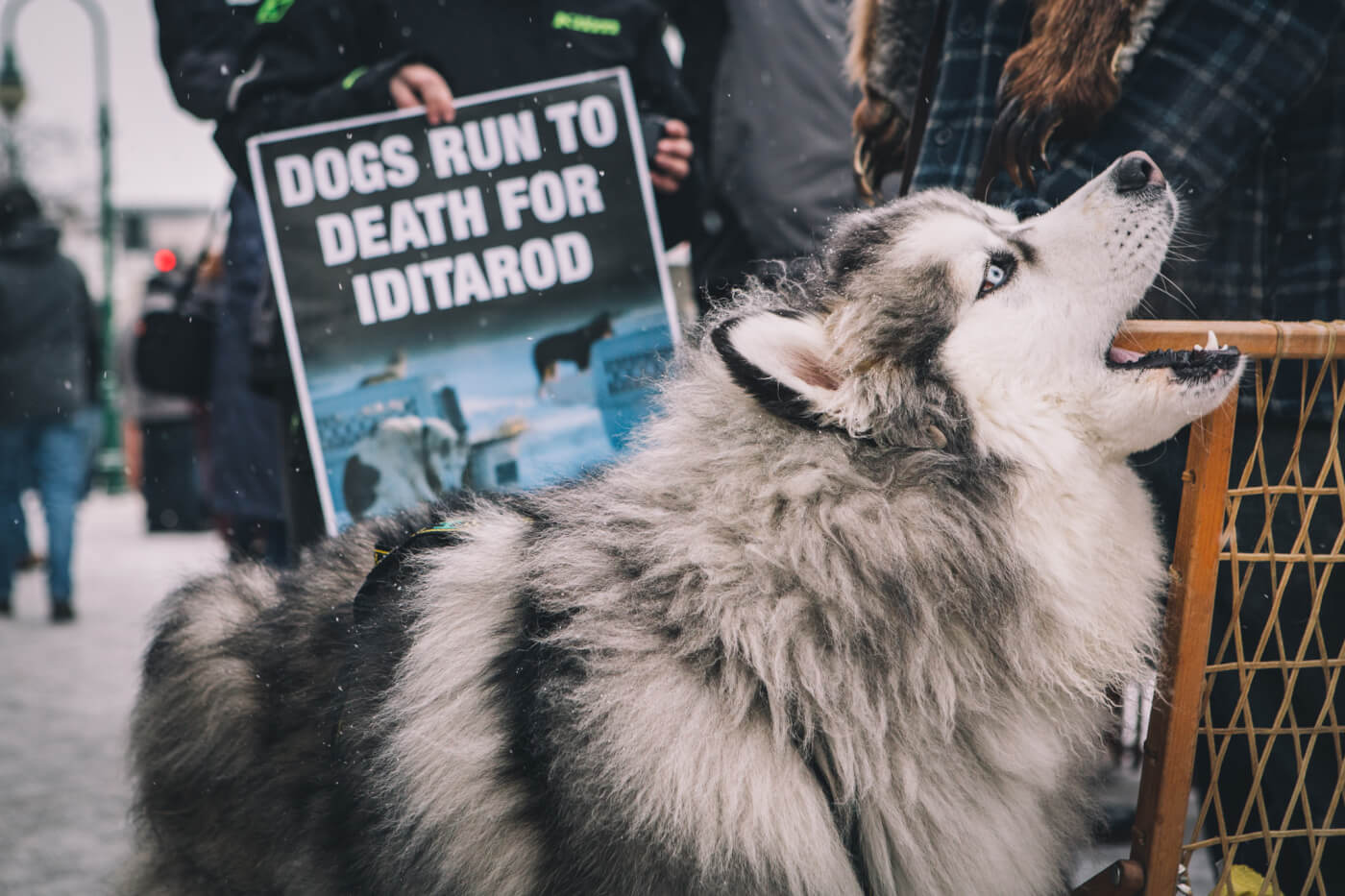 During the opening ceremony, PETA activists wearing three-dimensional husky masks and holding signs proclaiming, “150+ Dogs Have Died. Am I Next?” and “Pull Your Own Damned Sled,” occupied the starting line of the race to protest the event’s cruelty. 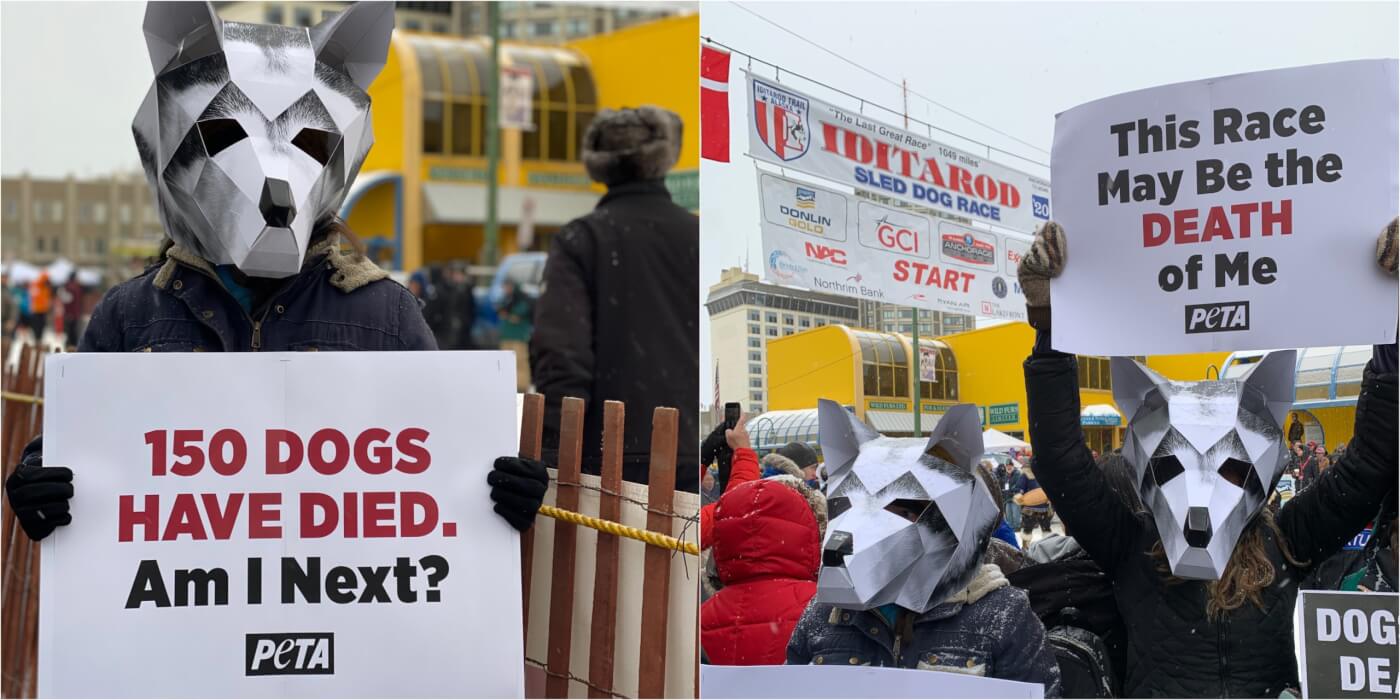 Less than a week before the race began, Alaska Airlines cut its decades-long ties with the Iditarod and decided that this year would be the last time it sponsors the event. This comes after the airline heard from nearly 100,000 PETA supporters and faced numerous PETA protests outside its corporate headquarters. Just two days later, Baird Private Wealth Management confirmed that it has ended its sponsorship of the Iditarod as well, following a push from PETA.

We’ll continue to keep a close eye on the 2020 Iditarod, including what happens with the worst, most abusive mushers. Continue to check back for updates. 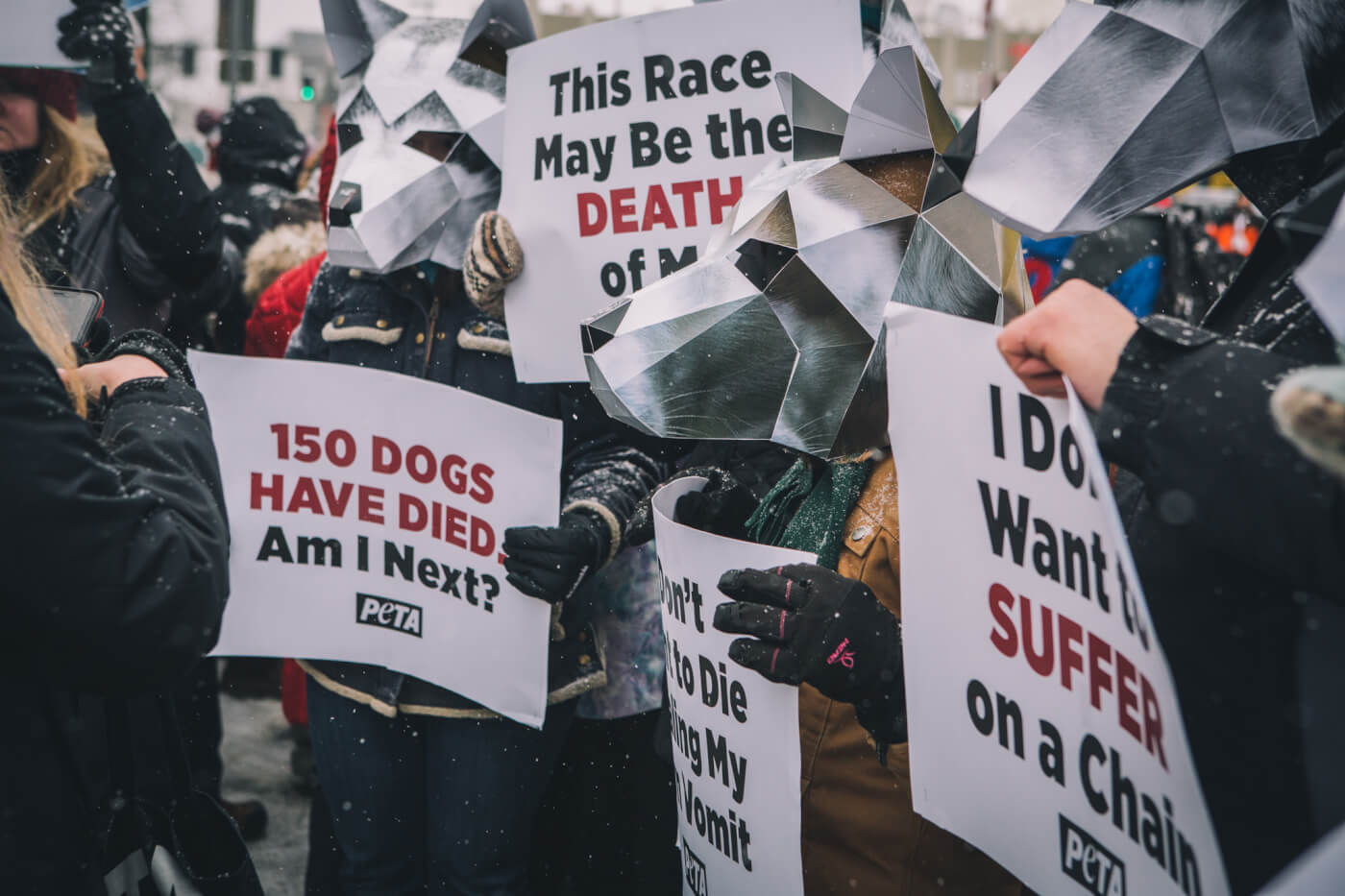 Help End the Iditarod by Asking Companies to Pull Their Sponsorships

Up to half of the dogs who start the race don’t finish because they’re too ill, injured, or exhausted to go on—and more than 150 dogs have died as a result of the race, not including countless others who were killed simply because they weren’t fast enough or who died while chained up during the off-season. 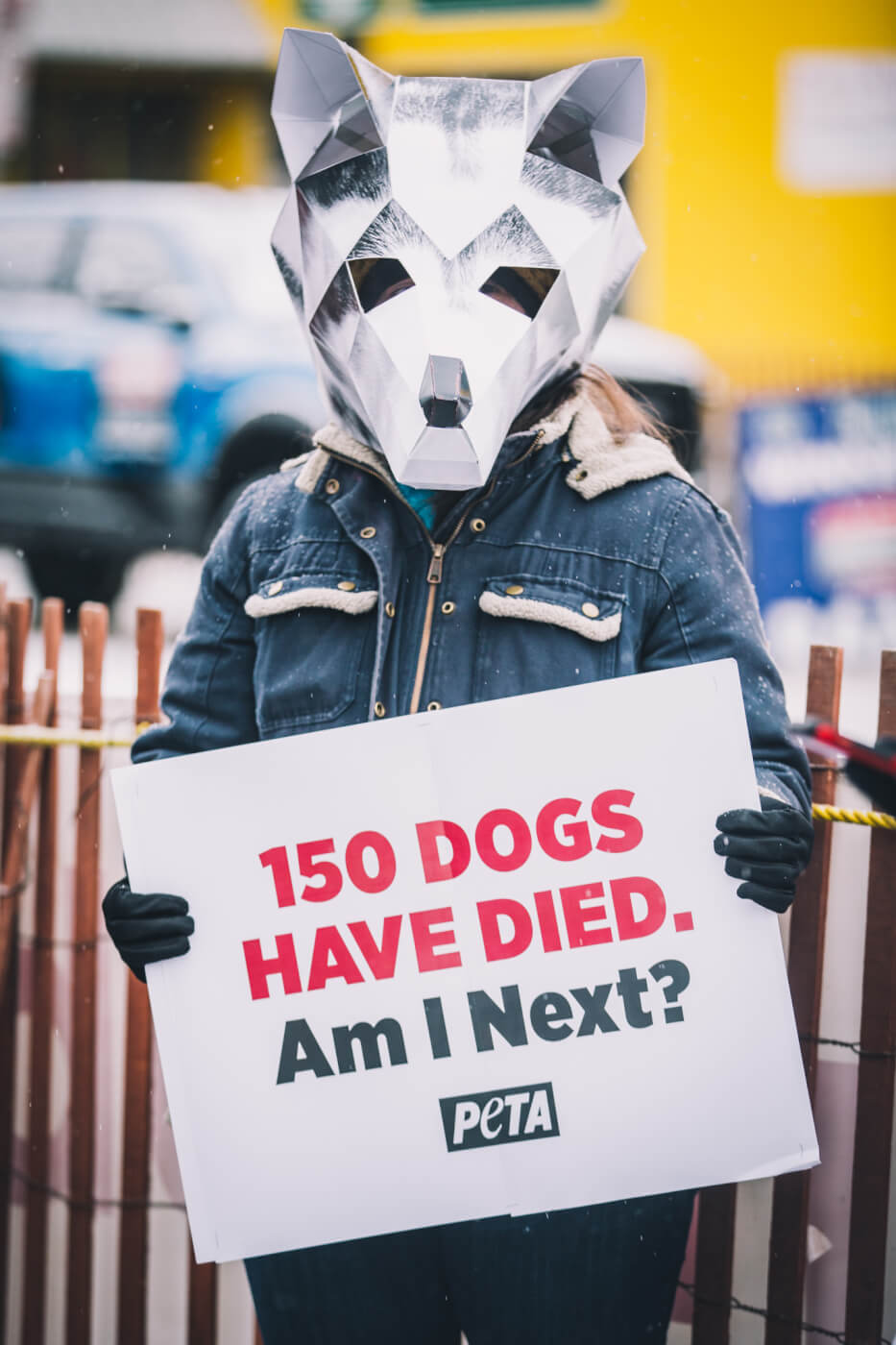 It’s no wonder major companies like Coca-Cola, Costco, Jack Daniel’s, State Farm, and Wells Fargo dropped their sponsorships: No one wants dog blood on their hands. 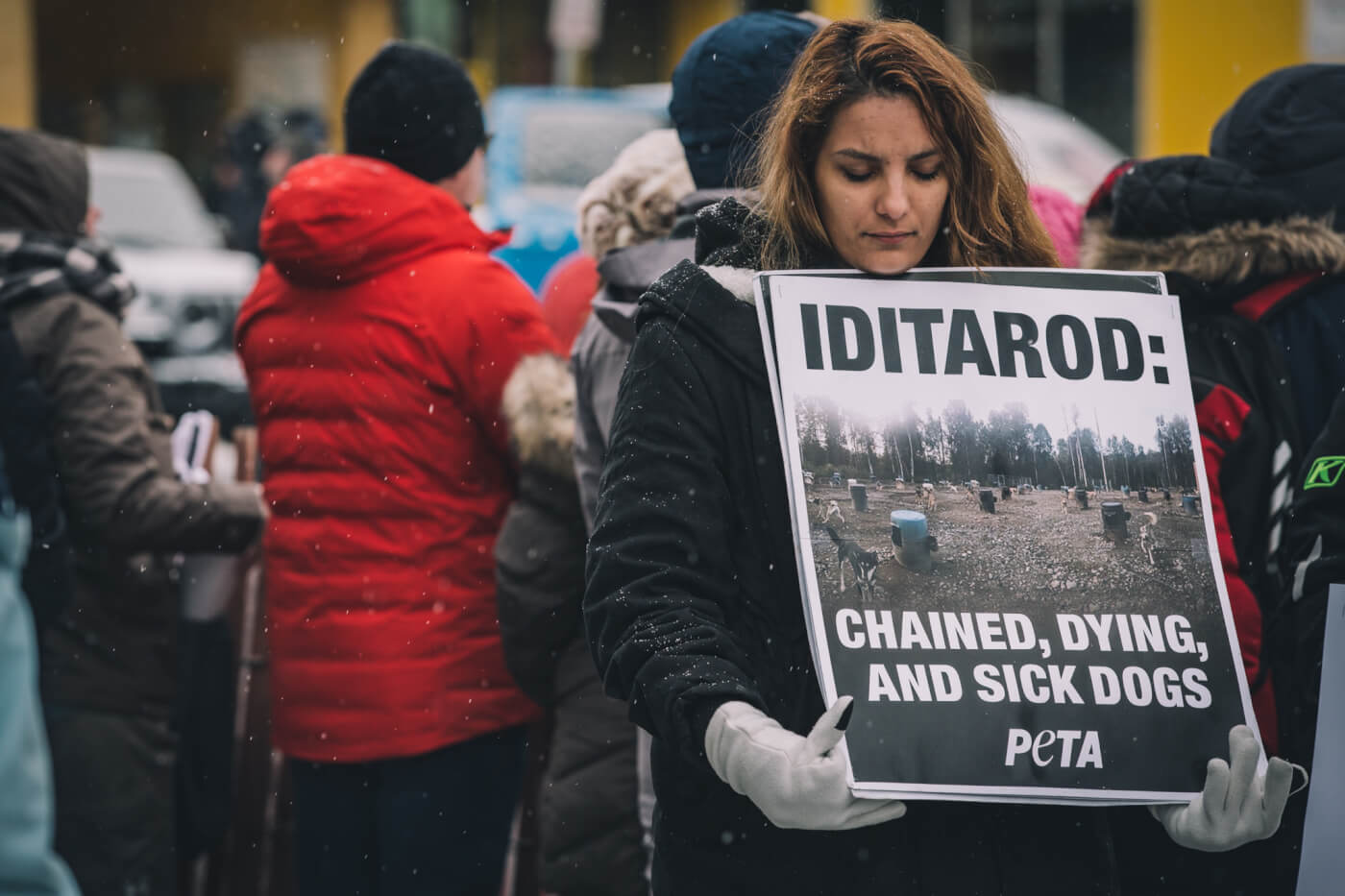