As Easter approaches, pictures of sweet, fluffy baby chickens and decorated Easter eggs will dominate our newsfeeds. But if people saw what chicks in the egg industry actually endure, they’d be shell-shocked. 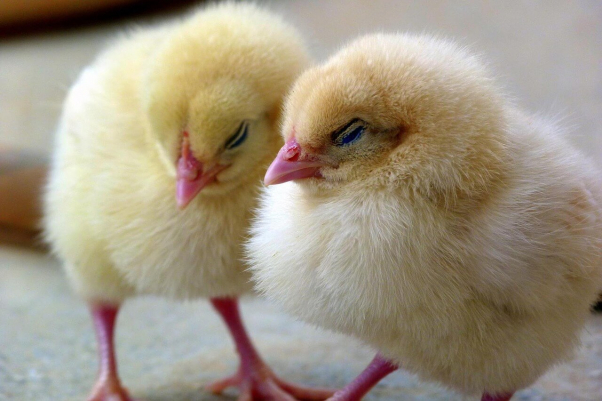 A mother hen bonds with her chicks while they’re still inside their shells. Chickens have well-developed language skills that include dozens of types of vocalizations, and mothers start teaching them to their young even before they hatch. Hens cluck softly while sitting on the eggs, and the babies soon start responding. Perhaps hens trapped in the egg industry know that this is all they’ll get: The bond will be broken as soon as their chicks hatch.

Hatcheries seek to maximize profits, and animals pay the price. Since male chicks are useless to the egg industry, almost all of them are killed shortly after birth. One of the most common methods? Throwing them into massive grinders called “macerators” and shredding them alive.

The Swiss government recently banned live shredding of baby chicks after a subcommittee determined the following:

“If the speed of the knives is incorrectly adjusted, it is not uncommon to see chicks just with their legs cut but still alive. … [T]he law on the protection of animals says: ‘This law aims to protect the dignity and the welfare of the animal’. It is reasonable to think that the fact of crushing a living animal does not respect this first article. On the other hand, from an ethical point of view, one can wonder whether the act of killing a chick for the sole reason that it is a male from a line of laying hens is acceptable. This tendency to breed only for eggs or for meat transforms the animal into a simple object of production and leads to absurdities such as the grinding of live male chicks, an action unworthy of human intelligence.”

France is also banning live shredding of chicks by the end of 2021. It’s great progress, but male chicks born into the egg industry in both countries will still be killed by carbon dioxide gas, and live shredding persists in the U.S. and other countries around the world.

Every commercial egg company that exists in the U.S. today relies on killing male chicks, even those that market their eggs as “cage-free,” “free-range,” “organic,” “humanely raised,” or “pasture-raised” or use other kind-sounding euphemisms. Nellie’s Free Range Eggs admits this on its website:

“[G]iven that there is no viable market for the male chicks, the hatcheries euthanize them. … We do not have control over which practice they use and it varies depending on the hatchery. We wish there was an alternative, but there currently are no hatcheries available to us that produce chicks without male chick culling.”

But there is an alternative. We don’t have to kill baby chicks—or any other animals. Check out PETA’s list of humane, dyeable Easter eggs and our roundup of the many products that you can use in place of eggs in recipes.