The following activities are based on a lesson created by Maru Vigo, a high school Spanish teacher in Arizona and one of the winners of TeachKind’s 2012 Teacher Appreciation Contest.

Spanish-language educators: This lesson plan is available here in Spanish.

Teachers: Have students read the following passage about Joaquin Phoenix, why he chose to adopt a vegan lifestyle, and how he’s using his fame to help animals. You could also have students take turns reading the passage aloud in class.

Actor Joaquin Phoenix, star of the award-winning 2019 thriller Joker, put a lot of work into transforming into this character—and ultimately won an Academy Award for his performance in the film’s leading role. Similarly, he put a lot of effort into transforming his own life into one filled with empathy and has consequently been able to help many animals. 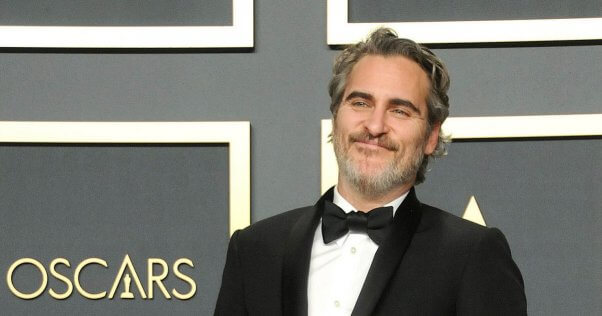 Phoenix’s performance as the Joker, DC Comics’ iconic character, is one of the many memorable roles that have made him a Hollywood favorite. He has said that playing that role was challenging because of the psychological commitment involved in becoming such a dark, complex, and mysterious character.

But the commitment that he made to playing this complicated role wasn’t as decisive as the experience that made him go vegan at the age of 4. And he has repeatedly shown that his fame doesn’t detract from his commitment to living a vegan lifestyle—in fact, he uses his success to raise more awareness for animals.

Why He Went Vegan

In an interview with the website Collider, Phoenix shared his vivid memory of the experience that inspired him and his family members to adopt a vegan lifestyle back in 1977, when we was a very young child:

Really it was seeing these fish being killed when I was on a boat as a kid. They were catching fish, and I guess to stun them they were throwing them against the side of the boat. I just had a profound strong reaction. It felt like a real injustice. It wasn’t just me, it was my siblings [too] …. I don’t know how to explain it. I think it made me distrustful, and angry, and frightened of … humanity. I just thought it was such a gross abuse of power in a way. I think that during that moment we knew that we were not going to eat meat anymore. We said to our parents, “Why didn’t you tell us?” It’s amazing. I remember my mom’s face, I remember her crying. She didn’t know how to answer. It became very obvious we weren’t going to eat meat anymore.

Phoenix adopted a vegan lifestyle, as did other members of his family, after this experience and has been a strong advocate for animals ever since. He has since helped animal rights groups such as PETA with various campaigns aiming to protect animals and their rights.

His story will help others think about the effects of the meat industry (one of the most harmful industries of all, when it comes to the environment), which produces 14.5% of greenhouse gas emissions. The U.S. Environmental Protection Agency shows that animal agriculture is the single largest source of methane emissions in the U.S.—and according to scientists, methane is much more effective at trapping heat in our atmosphere than carbon dioxide or other gases, which means that it contributes to climate change.

But a vegan lifestyle can provide hope. Experts have studied the possible effects that veganism could have on the planet and have concluded that by going vegan, we could cut greenhouse gases from food production nearly in half—as well as cutting land use for food production by 76%. That means that by choosing to eat less or no animal-derived foods, such as meat, as Phoenix and his family have, we can all make a difference for animals and help fight climate change.

Phoenix continues to help animals, using his fame to draw attention to animal issues. In September 2019, just before the release of Joker, he appeared on PETA billboards in busy Times Square in New York City and on Sunset Boulevard in Los Angeles that read, “We Are All Animals.” The ad urges people to live vegan and help end speciesism, which is a bias against other animals wrongly deemed inferior to humans.

“When we look at the world through another animal’s eyes, we have to realize that inside we’re all the same—and so we all deserve to live free from suffering,” says Phoenix. 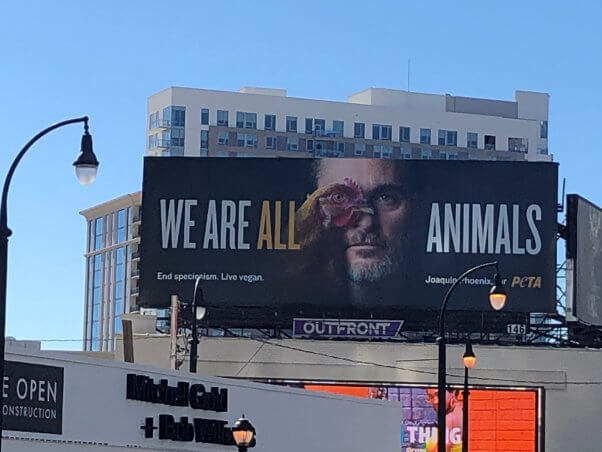 By appearing in such a powerful ad in such busy metropolitan areas, he was able to capitalize on the buzz of his upcoming movie in order to bring attention to an important issue close to his heart: animal rights.

Most recently, in August 2020, Phoenix appeared in a PETA print campaign to raise awareness of cruelty to animals on farms and to empower fans to take action for animals from their own homes by going vegan. In addition to appearing in the ad, Phoenix narrated a PETA investigation exposing a Walmart egg supplier whose workers were caught on video abusing hens.

“There’s so much pain in the world that we are powerless over, but being party to animal suffering is not one of them,” Phoenix says

By using his image to bring attention to the suffering of chickens on this Ohio egg farm, Phoenix appeals directly to consumers, urging them to think about the impact that their choices have on animals’ lives.

These aren’t the only times that PETA and Phoenix have worked together. He’s appeared in pro-vegan ads, advocated against the wool industry, and even narrated PETA’s undercover footage of dogs killed in the leather industry. In fact, he was named PETA’s Person of the Year in 2019 for his lifelong dedication to ending speciesism.

All these accomplishments are really just a drop in the bucket when it comes to the many positive actions that Phoenix has taken for animals. By directing attention to important animal rights issues at the height of his fame and success, he’s raising awareness and helping to guide people toward a lifestyle that doesn’t contribute to animal abuse or the destruction of the environment.

Have students look up the meaning of the following words, refer to their context in the passage above, and write a sentence using each of them.

Have students write synonyms of the following words:

Have students write antonyms of the following words:

Have students write their answers for the following questions.

Ask students to participate in a discussion about the reading and to support their views using details from the text. Guide the discussion using the following questions.