What’s one of the only good things to come out of 2020 so far? Disney’s The One and Only Ivan, based on the critically acclaimed children’s novel beloved by teachers and students alike!

The latest project from writer, director, actor, and longtime friend to animals Mike White is chock-full of powerful animal rights messaging. Adapted from the award-winning book of the same name, Ivan tells the story of a silverback gorilla and his escape from exploitation after being kidnapped from his natural habitat. Along the way, he meets many other animals who also long to be free.

Check out the stunning computer-generated imagery (CGI) in Ivan’s trailer, and be sure to stream the film on Disney+ starting on August 21:

Below are just a few reasons why Ivan is a must-see for students and educators of all ages who appreciate animals.

It has anti-exploitation messaging: The film’s theme is deeply rooted in the idea of “home”—in particular, what home means for animals trapped in roadside attractions and circuses. According to the film’s description, when Ivan meets Ruby, a baby elephant recently separated from her family in nature, he begins to “question his life, where he comes from and where he ultimately wants to be.” Wild animals belong in their natural habitats or, if that’s not possible, in expansive sanctuaries—not stuck inside cramped cages, forced to perform for human entertainment. Ivan explores these themes and paints animals as individuals who have their own wants and needs and deserve respect.

“This is a story about liberation—you can’t tell that story by exploiting real animals. CGI is the only humane way to depict animals and one look at Ivan’s face proves that we didn’t lose an ounce of realism.” —The One and Only Ivan screenwriter Mike White

It uses CGI animals: From a gorilla (voiced by Sam Rockwell) to an elephant (voiced by Angelina Jolie) to a seal (voiced by Mike White), the animals portrayed in Ivan are CGI, once again showing the world—including impressionable young children—that technology is both stunningly lifelike and the only humane way to depict animals on screen. What your students may not realize is that when live animals are used in films and television, they’re often forced to live inside cramped, filthy cages and deprived of exercise and enrichment. Many are even taken away from their mothers as babies, which is another theme explored in Ivan.

It highlights the power of protest: TeachKind loves a good protest, as it’s frequently one of the best tactics to inform the public and draw media attention to issues of animal exploitation. In Ivan, activists protest outside a mall to call for the release of Ruby and Ivan and speak out against circuses. “Big Top Must Stop” is a favorite slogan of ours—it reminds us of that time PETA took down Ringling Bros. and Barnum & Bailey Circus after decades of powerful protests: 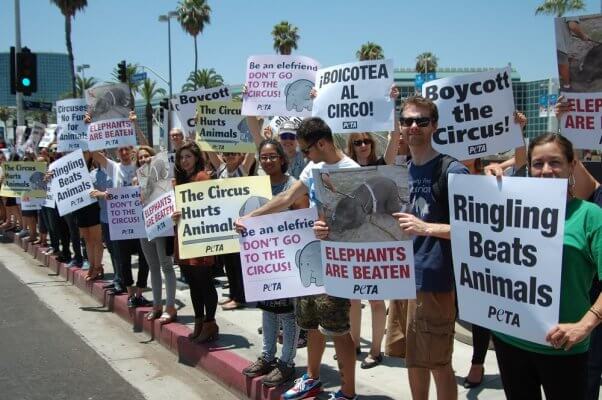 Let these young activists inspire your students to speak up for animal rights!

There was kindness in the writers’ room: We have longtime PETA supporter White to thank for expertly adapting author Katherine Applegate’s beautiful story for the silver screen—or is it silver stream?—and amplifying her strong message of animal liberation for millions to enjoy. White has incorporated animal rights themes into many of his past projects, including Beatriz at Dinner and Year of the Dog. The HBO series Enlightened, which White co-created and starred in, also touched on treating animals with kindness and even featured a guest appearance by PETA Senior Vice President Lisa Lange.

A life being forced to perform in the circus is no life at all.

PETA awarded @Disney’s #TheOneAndOnlyIvan a #FreeTheAnimals Award for using CGI instead of wild animals to tell the story of animals escaping exploitation!@IvanMovie is on @disneyplus 8/21. https://t.co/W73mbuGtMI pic.twitter.com/xoFjIzi67m

PETA is honoring Disney with a “Free the Animals” Award for using animal-friendly CGI to tell Ivan and Ruby’s story of escape from exploitation. We hope the award will remind Disney and other studios that CGI is the one and only humane way to tell stories about animals on the big screen.

Hopefully, Ivan will inspire kindness to animals suffering in places like roadside zoos, circuses, and training compounds for film and TV—including those like Chance, a chimpanzee used and exploited in The Wolf of Wall Street, advertisements, and other publicity stunts by the Rosaires, a notorious circus family. This 11-year-old chimpanzee has been forced to perform in a circus-style show for years at Big Cat Habitat, a roadside zoo in Florida.

How You and Your Students Can Help 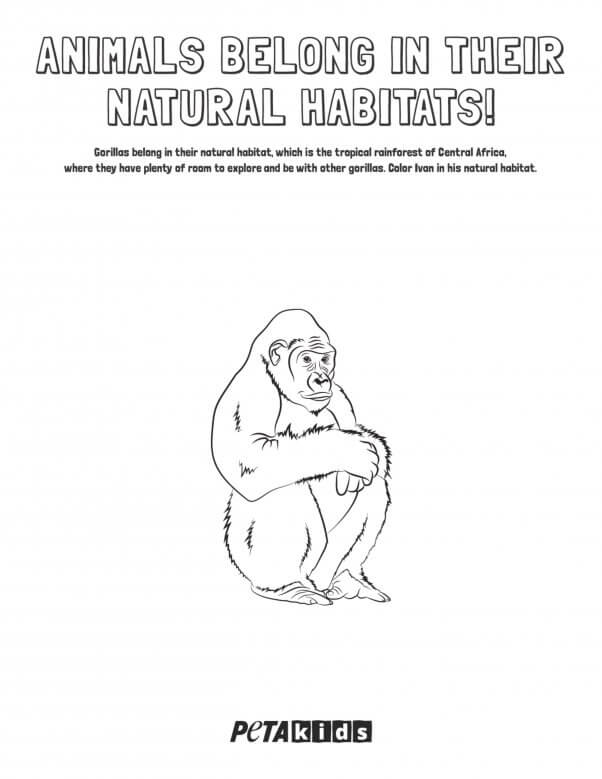 Check Out These Other Animal-Friendly Movies That You and Your Students Can Stream Right Now!