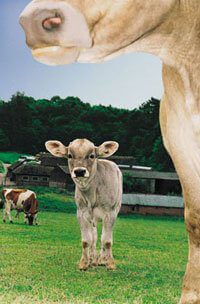 The climate crisis has been called humankind’s greatest challenge and the world’s gravest environmental threat. According to the United Nations (U.N.) report Climate Change 2014: Impacts, Adaptation, and Vulnerability, climate change is having an impact on every continent, affecting agriculture, human health, ecosystems, water supplies, and even people’s livelihoods. Many conscientious people are trying to help combat the climate crisis by driving more fuel-efficient cars and using energy-saving light bulbs, but these measures simply aren’t enough.

If you’re serious about protecting the environment, the most important thing that you can do is stop eating meat, eggs, and dairy “products”.

How Animal Agriculture Contributes to the Climate Crisis

Feeding massive amounts of grain and water to farmed animals and then killing them and processing, transporting, and storing their flesh is extremely energy-intensive. And forests—which absorb greenhouse gases—are cut down in order to supply pastureland and grow crops for farmed animals. Finally, the animals themselves and all the manure that they produce release even more greenhouse gases into our atmosphere.

Carbon dioxide, methane, and nitrous oxide are all powerful greenhouse gases, and together, they cause the vast majority of climate change.

Chatham House, an international affairs think tank, has called for a carbon tax on meat to help combat the climate crisis. Of course, eating vegan foods rather than animal-based ones is the best way to reduce your carbon footprint. A University of Chicago study even showed that you can reduce your carbon footprint more effectively by going vegan than by switching from a conventional car to a hybrid.

The billions of animals who are crammed onto U.S. factory farms each year produce enormous amounts of methane. Ruminants—such as cows, sheep, and goats—produce the gas while they digest their food, and it’s also emitted from the acres of cesspools filled with the feces that pigs, cows, and other animals on these farms excrete. The U.S. Environmental Protection Agency has shown that animal agriculture is globally the single largest source of methane emissions and that, pound for pound, methane is more than 25 times as effective as carbon dioxide at trapping heat in our atmosphere.

According to Vasile Stanescu, a scholar at Mercer University, animals raised by “organic” methods emit even more methane than animals on factory farms do. He believes that so-called “free-range” or “pasture-raised” animals are “significantly worse” in terms of greenhouse-gas emissions.

Nitrous oxide is about 300 times more potent as a greenhouse gas than carbon dioxide. According to the U.N., the meat, egg, and dairy industries account for an astonishing 65 percent of worldwide nitrous-oxide emissions. (Use the N-Calculator to calculate your nitrogen footprint and to see how you can lower your nitrogen usage.)

What Other Experts Say

The U.N. believes that a global shift toward plant-based food is vital if we are to combat the worst effects of the climate crisis. By some estimates, animal agriculture is responsible for more greenhouse gases than all of the world’s transportation systems combined.

An Oxford University study, published in the journal Climatic Change, shows that meat-eaters are responsible for almost twice as many dietary greenhouse-gas emissions per day as vegetarians and about two and a half times as many as vegans. The researchers found that the diets of people who eat more than 3.5 ounces of meat per day—about the size of a deck of playing cards—generate 15.8 pounds of carbon-dioxide equivalent (CO2e) each day, whereas vegetarians and vegans are responsible for 8.4 pounds and 6.4 pounds of CO2e, respectively. The study indicated that the dietary greenhouse-gas emissions among meat-eaters were between 50 and 54 percent higher than those of vegetarians and between 99 and 102 percent higher than those of vegans.

Overall, the study’s authors concluded that the production of animal-based foods causes significantly greater greenhouse-gas emissions than the production of vegan foods. Many other scientists around the world have reached the same conclusion. Researchers with Loma Linda University in California found that vegans have the smallest carbon footprint, generating a 41.7 percent smaller volume of greenhouse gases than meat-eaters do.

When scientists at Chalmers University of Technology in Sweden calculated ways to combat climate change, they found that cutting greenhouse-gas emissions from transportation and energy use alone isn’t enough to curb the climate crisis. Dr. Fredrik Hedenus, the lead scientist of the study, said that “reducing meat and dairy consumption is key to bringing agricultural climate pollution down to safe levels.”

Similarly, Ilmi Granoff from the Overseas Development Institute in the U.K. has urged officials to forget about coal and cars, because the “fastest way to address climate change would be to dramatically reduce the amount of meat people eat.”

You Can Help Stop the Climate Crisis

The U.N. says that raising animals for food is “one of the top two or three most significant contributors to the most serious environmental problems, at every scale from local to global.” The most powerful step that we can take as individuals to halt the climate crisis is to stop eating meat, eggs, and dairy “products”. Order PETA’s free vegan starter kit and do your part to save the planet and animals today!