Nearly 30 years ago, legendary rockers and animal rights pioneers Paul and Linda McCartney had a very simple message to share with the world: “STOP Eating Animals. GO Veggie.” Today, that message is as important as ever, so PETA teamed up with another pair of famous animal rights activists to recreate this iconic photo and spread the word about going vegan.

Longtime PETA collaborator Alicia Silverstone was joined by her son, Bear Blu—in his first-ever PETA campaign—to recreate the McCartney public service announcement and urge a new generation of people to go vegan, at a time when the world is in desperate need of kindness toward humans and other animals alike. Their “go vegan” message encourages everyone to boost their immune system and help prevent the spread of deadly animal-borne diseases in the age of COVID-19, by shunning meat (including fish), eggs, and dairy. 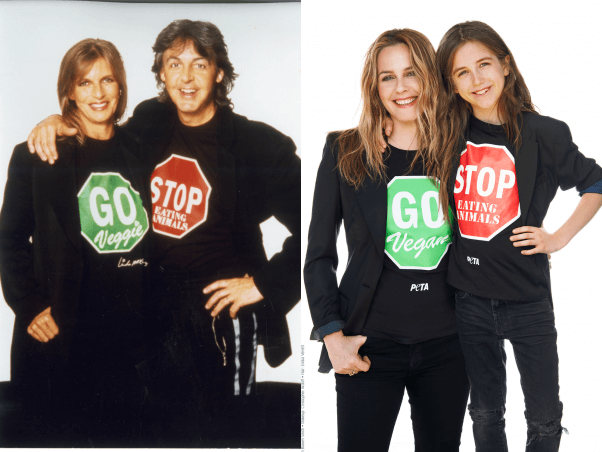 “Paul McCartney is obviously an amazing artist. I’ve been lucky to be an activist alongside him for the last 25 years, and he’s just an incredible man and an incredible heart,” the Clueless star told PETA. “I’m so sad I didn’t get to meet his beautiful wife, Linda. But doing anything in his honor is extraordinary.”

McCartney, an early supporter of PETA, has lent his voice to countless campaigns, from speaking out against testing on animals to helping secure the release of greyhounds from a canine blood bank. For this campaign, the musical icon is optimistic that the world will heed the call to stop eating animals and create a kinder, healthier future for us all.

“The meat trade’s threat to our health can be halted, and there are hopeful signs that people are starting to realize that this must be done to secure a brighter future for our children and theirs,” McCartney said.

The adorable mother-son duo sat down to interview each other in an exclusive PETA video, and they asked some tough questions (turns out, neither of them can live without bread, to which we say same guys, same). When asked which animal they’d want to be for a day, both Alicia and Bear said that they would love to be a cow or a pig—but only at a true animal sanctuary. Even young Bear knows that animals raised on farms and killed for food are often imprisoned in cramped crates or sheds, are torn away from their families, and don’t ever get to breathe fresh air until the day they’re loaded onto trucks headed for slaughterhouses.

The reasons to go vegan have never been clearer or more pressing.