It was difficult to miss all the misogyny that was on display in Tiger King—even if you aren’t an ardent feminist, certain scenes would still make your blood boil. However, just as it did with the horrors of the cub-petting industry, the Netflix docuseries failed to even scratch the surface of the rampant sexism in the unsavory world of animal exhibition. There’s no need to take our word for it—not when “Joe Exotic,” “Doc” Antle, Jeff Lowe, and a slew of other animal abusers have shown their true misogynistic colors too many times to count—proving that sexism and speciesism go hand in hand.

Let’s take a look at the animal exhibitor “lineup”:

“Joe Exotic,” Tiger King‘s premier villain, has made few attempts to hide his strong prejudice against women. This includes routinely referring to Carole Baskin, owner of Big Cat Rescue, as a “bitch” throughout the show (“that bitch Carole Baskin” and “I’m gonna kill that bitch” seemed to be Joe’s favorite phrases) as well as spending the better part of a decade threatening the female animal rights activist in violent, often sexually charged ways.

Before his incarceration, Joe Exotic also made threats against PETA, including posting an image in which he hanged a mannequin labeled “BCR” (for “Big Cat Rescue”) and another labeled “PETA.”

Tigers and women weren’t his only intended victims, either. In Tiger King, the former roadside zoo owner and convicted felon—who also abused bears, chimpanzees, baboons, and other wild and exotic animals during his G.W. Exotic days—was accused of using methamphetamine to nurture dependency in much-younger romantic partners John Finlay and Travis Maldonado.

How lowe can abusive animal exhibitors go? Jeff Lowe—a notorious animal exhibitor who also appears on Tiger King—has the answer. At the beginning of the sixth episode of the docuseries, Joe Exotic claims that he bailed Lowe out of jail after the latter “beat up and strangled his first wife, Kathy Lowe.”

In episode four, Lowe admits to using big-cat cubs to lure women into bed with him. “A little pussy gets you a lot of pussy,” he declared.

In 2008, Lowe pleaded guilty to federal mail fraud after he posed as an employee of a domestic violence charity in order to get marked-down merchandise for his liquidation store.

Like his former business partner, Joe Exotic, Lowe made obscene threats of violence against PETA staff, too, including PETA’s cofounder and president, Ingrid Newkirk, and PETA Foundation Director of Captive Animal Law Enforcement Brittany Peet, who appeared in Tiger King. In a June 2017 Facebook post, he threatened to livestream Newkirk’s murder. Then in June 2017, he referred to Peet as a “c*nt” and insinuated that he’d orchestrate her murder: “When you offer great white shark swims, I will personally bring Brittany Peet down for a dip,” Lowe wrote in a comment to Kathy Stearns on Facebook.

… working at his roadside zoo (some of whom began working for him when they were just teenagers) into sleeping with him, something he apparently said would help them reach “his level of enlightenment.”

“He had four women who were sleeping with him when I was there, and each started out as his apprentice,” said Fisher, an apparent former Myrtle Beach Safari apprentice of Antle’s. “That might not fully fit the ‘sex cult’ moniker that Twitter has bestowed on Doc’s place, but it is certainly problematic and predatory in my opinion.”

According to Fisher, Antle chose his apprentice’s clothes, told them what they could and couldn’t eat, and even pressured Fisher into getting breast implants—something she agreed to, she said, because she knew it would mean that she’d be allowed to rest for a few days after surgery. Fisher said that she and Antle’s other apprentices worked long days with no breaks, were paid roughly $100 per week, and were forced to live in cockroach-infested “terrible horse stalls basically, like with sliding doors with bars on them.”

“I don’t need you to teach me a damn thing about animals. How the f*ck you got these women trained?” Stark asked Antle of his apprentices.

In February, the U.S. Department of Agriculture (USDA) issued an order to revoke Stark’s exhibitor license permanently and ordered him and his sham “sanctuary” to pay a total of $340,000 in civil penalties—$40,000 of which was assessed against him individually. Stark appealed but lost just a few months later and now has 60 days to appeal the USDA’s ruling in a federal court.

Given all the facts, it’s rather unsurprising that a man who bludgeoned a leopard to death with a baseball bat is also a misogynist.

Although not mentioned in Tiger King, many know Black Jaguar–White Tiger Foundation in Mexico is a sham “sanctuary”—all the #SaveTigers and other rescue-themed hashtags in the world can’t hide the fact that the facility promotes selfies with cubs and relegates grown cats to dirt and concrete lots. So what’s Black Jaguar–White Tiger owner Eduardo Serio’s big public-relations solution? Dismiss critics of his fake sanctuary as bitter women.

“The real problem is that [these] bitter senior angry vegan feminists messed up their own lives when they had a chance to live them and now the only way to redeem themselves (According to them) is to become social justice warriors. Obviously, if a real man would pay attention to them, they’d drop their phones and focus on that testosterone in front of them, but that won’t happen,” Serio ranted in a since-deleted Instagram post.

Little does Serio realize that sexist bullies only encourage animal rights activists (a diverse group consisting of people of all ages, genders, and other demographics, thank you very much) to continue to challenge the tired supremacist notion that tigers, jaguars, and other nonhuman animals exist solely for human use.

Randy “The Tiger Man” Stearns used to co-operate a roadside zoo in Dade City, Florida. But Randy “The Registered Sex Offender” Stearns might be a more apt nickname: Stearns, who was president and “head trainer” of the reportedly now-defunct Dade City’s Wild Things (DCWT), was charged with eight counts of sexual misconduct, including six involving children he reportedly exposed himself to in an elevator. He later pleaded guilty to two counts of sexual misconduct and is now registered as a sexual offender.

Meanwhile, DCWT reportedly closed its doors for good after the last six tigers once held there were sent to The Wild Animal Sanctuary, an accredited sanctuary in Colorado. The victory came just days after we obtained a default judgment and a permanent injunction in our Endangered Species Act lawsuit against the sleazy Florida roadside zoo.

First, Bruce Sankey exploited animals—then he came for a young girl. The former manager of Pymatuning Deer Park (a deplorable tourist trap in Jamestown, Pennsylvania) is currently serving a 10- to 20-year prison sentence for sexually abusing a then-14-year-old girl. The victim reportedly worked with him at the roadside zoo, where a bear named Bosco is currently confined to a virtually barren concrete pit. According to reports, Sankey expressed “little remorse” at his sentencing hearing.

Sankey was described as “manipulative, scheming and self-centered” by a member of the victim’s family. The former roadside zoo operator and his wife, who currently operates Pymatuning Deer Park, apparently pressured his young victim into not coming forward. Sankey is now classified as a Tier III sex offender for life.

Daryl Raymond Jr. made a living off animals’ misery, forcing ponies to carry children on their backs at a traveling menagerie. It turns out that ponies weren’t the only ones he exploited. In 2016, Raymond was accused of touching six children inappropriately when they visited Jungle Safari, the traveling zoo where he worked at the time. In 2018, he pleaded guilty to multiple counts of sexually abusing children, all of whom were reportedly girls between 3 and 6 years old. “Raymond would guide the pony by the saddle horn, and that’s when the touching of the victims would occur,” the Bangor Daily News reported.

Pony rides treat animals like inanimate carnival equipment, so it’s hardly surprising that someone who earned a living exploiting animals abused others, too.

Zootastic Park in Troutman, North Carolina, is a roadside zoo that regularly forces baby wild animals into stressful photo-op encounters and keeps animals in barren, decrepit enclosures. Owner Scottie Brown has been cited repeatedly by the USDA for federal Animal Welfare Act violations and was fined more than $7,000 for failing to provide animals with adequate care.

His legal woes didn’t end there: In 2010, Brown was arrested for assaulting his ex-wife, Kelly Underwood. He allegedly broke into her house and held her down. According to the Mecklenburg Superior Court clerk’s office, the charges were dismissed in 2017.

It’s not unusual for those who abuse animals to carry out or threaten to carry out acts of violence—including physical attacks and sexual assault—against women and children. Animal handlers and exhibitors demand 100% compliance from the animals they abuse, who experience learned helplessness, just as victims of domestic violence do. This power dynamic is common in circuses, too, where virtually all handlers are male and virtually all elephants are female:

Some of the jobs and even lives of the men listed above have revolved around the imprisonment, reproductive control, kidnapping, and abuse of tigers and other wild and exotic animals, so it’s not exactly shocking when they treat women and children in the same abusive, domineering manner.

The link between cruelty to animals and other violent crimes is well established.

These animal exhibitors’ violence and exploitation didn’t stop with animals, and that’s not unheard of. The same pattern occurs in other animal-abusing industries, too, as we’ve seen with some vivisectors.

“If somebody is harming an animal, there is a good chance they also are hurting a human,” said John Thompson, deputy executive director of the National Sheriffs’ Association. “If we see patterns of animal abuse, the odds are that something else is going on.”

Please, help protect everyone from these dangerous individuals by never visiting a roadside zoo or any other exploitative operation that puts animals on display. Click on the link below to do more for victims of speciesism: 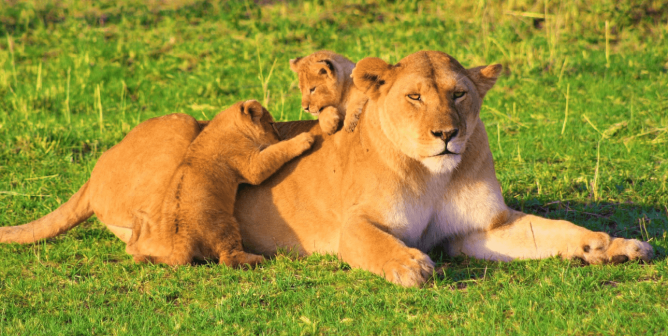