Netflix’s hit show Money Heist has captured the attention of audiences around the world, becoming the entertainment service’s biggest show outside the U.S. One of the series’ stars has captured the hearts of millions of fans and all of us here at PETA by speaking up for animals! In her debut PETA campaign, Spanish actor Alba Flores shares her veg journey and encourages fans to keep animals off their plate—for good.

If you haven’t caught the Money Heist bug yet, you’re in for a treat—and many, many hours of binge watching. Alba stars as Nairobi, one of the show’s anti-heroes you just can’t help but root for, even though they’re, well, stealing a lot of money and holding 67 people hostage.

Alba’s ad, shot by popular fashion photographer Nico Bustos, could easily be mistaken for a magazine cover, but it’s her “Go Veg” message that fans should be subscribing to. “I started to see how much food was thrown away, and I started to think about where that food came from […] and how necessary were the deaths of those animals,” Alba told PETA.

“I think that your food doesn’t have to be the cause of suffering and exploitation of animals.” 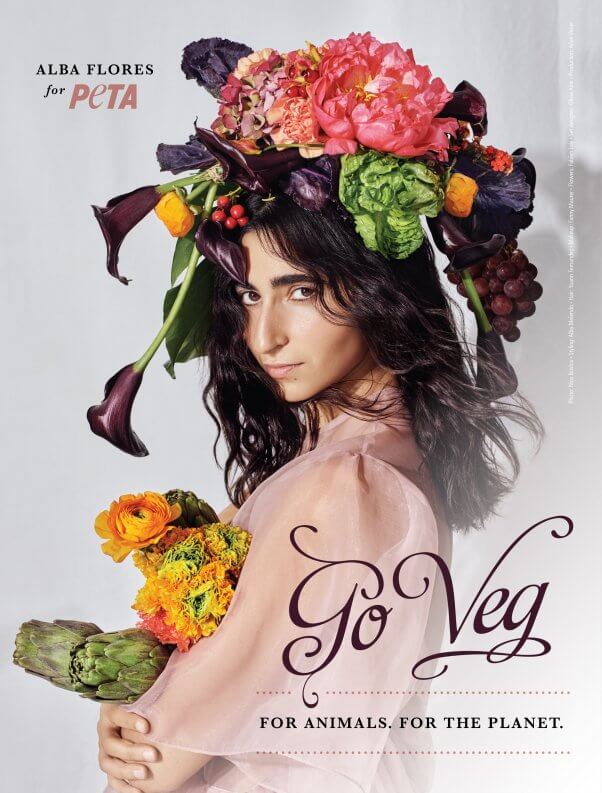 In her behind-the-scenes PETA interview, Alba talks about avoiding animal-derived foods, which she began to do when she made the connection between food waste, animals being killed for food, and the destructive impact that meat has on the environment.

Here are some facts about animals to consider:

But the current system of animal agriculture doesn’t treat animals like the complex, feeling individuals they are. Instead, they’re bred for human consumption, crammed by the thousands into filthy, windowless sheds or stuffed into wire cages or metal crates. Most of them won’t even feel the warmth of the sun on their back or breathe fresh air until the day they’re loaded onto trucks headed for slaughterhouses.

You can help save nearly 200 animals per year just by going vegan! That’s 200 lives belonging to sentient individuals, who experience joy, pain, love, and fear just like us.

Climate change is here. It’s real, and it’s a global crisis—and animal agriculture is one of the biggest culprits. Here are some facts to put it all in perspective:

One of the most effective things that we can do as individuals to combat climate change is to stop eating animals and go vegan right now. Pick up a copy of our popular vegan starter kit: