The book Animal Experimentation: Working Towards a Paradigm Change is now available here for free. It includes a chapter written by PETA’s vice president of international laboratory methods titled, “Modernizing Biomedical Training: Replacing Live Animal Laboratories With Human Simulation,” and a chapter written by the science policy adviser for PETA U.K. titled, “Political Campaigning: Where Scientific and Ethical Arguments Meet Public Policy.” Download it today and see how we’re bringing together leading minds from around the world to end experiments on animals.

Johns Hopkins Bloomberg School of Public Health’s Center for Alternatives to Animal Testing (CAAT) is hosting a launch event for a groundbreaking new book titled Animal Experimentation: Working Towards a Paradigm Change. The book, that will be available through open access early next year, reviews current animal use in science, covers innovative non-animal methods to address urgent scientific questions and offers a roadmap towards the continuing replacement and eventual elimination of animals used in science. It  is a collaborative effort of 51 international experts, one of them being PETA’s vice president of international laboratory methods, Shalin Gala. 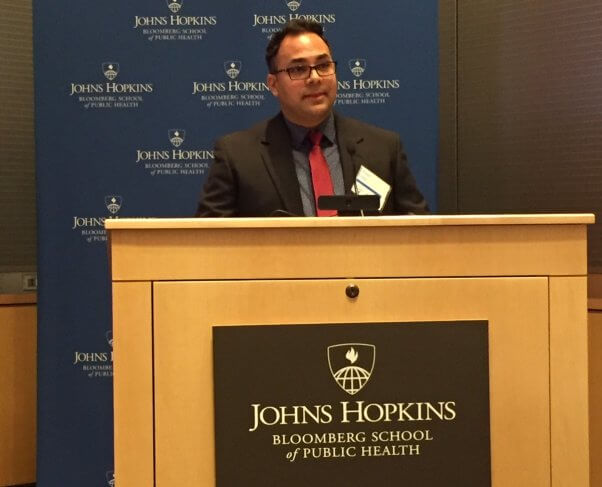 The book covers many topics, from the scientific problems with animal experiments to how much money the United States wastes on them and from ethical issues with confining animals in laboratories to modern, non-animal testing and teaching methods. Shalin, along with simulation experts from Harvard Medical School and the University of Florida College of Medicine–Jacksonville, co-authored the chapter titled, “Modernizing Biomedical Training: Replacing Live Animal Laboratories with Human Simulation.” It discusses the new wave of high-tech human medical simulation technology, which improves learning, reduces laboratory costs, and prevents animals from being subjected to painful and deadly classroom experiments around the world.

PETA has donated 119 lifelike TraumaMan human-patient simulator models valued at nearly $3 million to Advanced Trauma Life Support programs in 22 countries. The programs have all replaced the use of animals in surgical training with simulators that are more anatomically realistic for teaching human trauma management and allow trainees to repeat procedures until they feel comfortable performing them.

You can help by urging your congressional representatives to support the Battlefield Excellence through Superior Training (BEST) Practices Act, which would phase out the use of animals in all military trauma training drills.