For its outstanding advances in behalf of animals over the past 12 months, Los Angeles has been chosen as PETA’s City of the Year for 2012. The Los Angeles City Council will receive a commemorative certificate, along with a letter signed by PETA President Ingrid E. Newkirk, in recognition of its achievements. 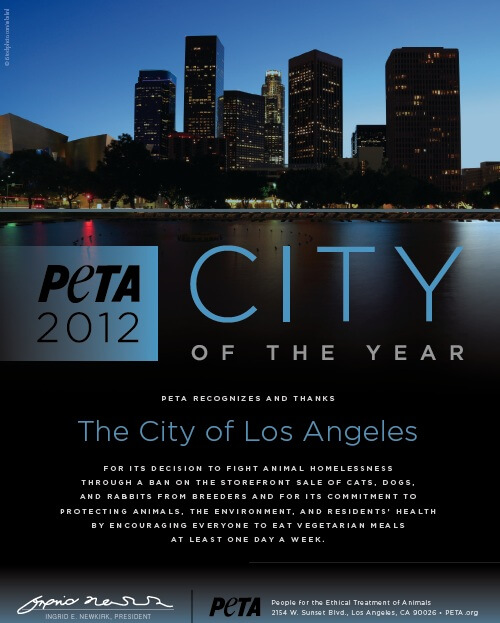 In a state that has been a trailblazer for animal-friendly legislation—including bans on foie gras and shark-fin soup and the passage of a law that raises the standards of animal welfare on factory farms—the City of Angels continued to raise the bar in 2012, with accomplishments that include:

But these aren’t the only reasons why L.A. has drawn PETA’s notice in 2012. In July, Dodger Stadium took the fifth spot on PETA’s annual list of the Top 10 Vegetarian-Friendly Major League Ballparks. L.A. is also the hometown of PETA’s 2012 Person of the Year, the fabulous Anjelica Huston.

And, hmm, it seems like there was something else … oh, yes: In March, PETA held the grand opening of its Los Angeles offices in the freshly inaugurated Bob Barker Building. Coincidence? Think it over while Ella takes you on the grand tour.

We hope you’ll join PETA in thanking the members of the Los Angeles City Council for their compassionate actions over the past year—and encourage them to keep up the great work in 2013 and beyond!