A little-known restaurant in Hermosa Beach, California, must have thought it was being sly. The restaurant was selling a hamburger topped with foie gras when California’s ban on the sale of the cruelly produced, diseased duck liver went into effect on July 1. After the ban was in place, the restaurant continued to serve the foie gras burger but tried to be crafty by changing the menu to read that people who purchased the burger would receive a free side of foie gras. But PETA wasn’t buying it. 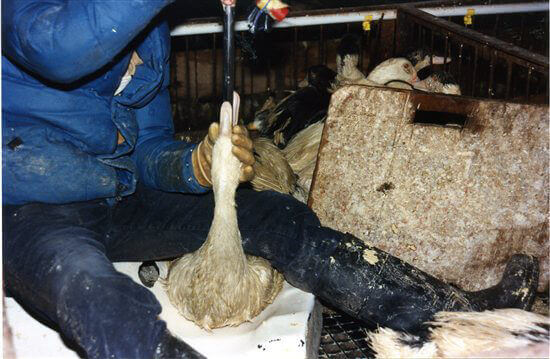 We contacted the Hermosa Beach Police Department, but with a lot on their plates, they haven’t gotten around to the case. So we’ve taken the matter to court, filing suit against the restaurant, called Hot’s Kitchen, for engaging in unlawful business practices.

Of course, selling foie gras isn’t just unlawful—it’s despicable. Every PETA undercover investigation of a foie gras farm has revealed that ducks often choke to death when workers ram hard metal tubes down their throats to force-feed them and that ducks’ organs often rupture from the excessive amounts of grain that are pumped into their stomachs. One duck had a gaping hole in his neck that was so severe that water spilled from it when he drank. And two ducks whose organs had swelled so large that they could not move were being eaten alive by rats.

Foie gras production is so cruel that 15 countries have banned it, including the U.K., Germany, and Australia, and more U.S. states will likely follow California’s lead. And PETA intends to make sure that greedy restaurant owners won’t get away with underhandedly hawking this “delicacy of despair.”