A breeder who performed painful ear-cropping procedures on dogs using razor blades and sold the pups to celebrity clients has been convicted of cruelty to animals. Simon Davis bred American bulldogs at Lions Lair Kennels in England. He charged celebrity clients such as Little Mix singer Leigh-Anne Pinnock and Geordie Shore cast member Aaron Chalmers up to $9,000 for them. Working with British animal welfare charity the RSPCA, police raided Davis’ breeding operation and found several dogs and puppies who had been subjected to ear-cropping, in which part of their ears was cut off, as well as what appeared to be an “ear cropping kit”, which included syringes, razor blades, and pliers.

Mutilating dogs’ ears is illegal in the U.K. and many other European countries, as it should be everywhere. Davis was charged with and pleaded guilty to seven violations of the British Animal Welfare Act and was sentenced to 18 weeks in prison suspended for 12 months, 160 hours of community service, and about $13,000 in costs to be paid to the RSPCA. He was also banned from having animals for 15 years. Since he’d been breeding and selling dogs for three years, his actual victim count is believed to be much higher than seven. 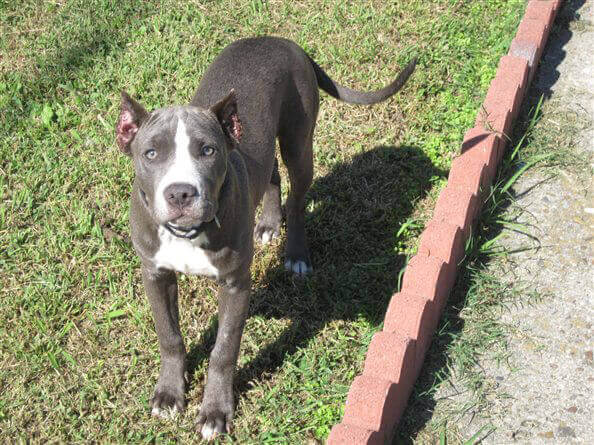 While not related to Davis’ case, PETA and animal control got involved after an animal advocate reported seeing this pit bull puppy—who had crusty, bloody, infected ears following an apparent ear-cropping procedure—confined to a Virginia yard without any shelter. 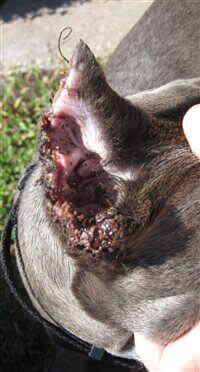 When buyers asked Davis about the dogs’ cropped ears, knowing that such a procedure was illegal, he reportedly told them that he had bought them from breeders in the U.S.—where mutilating dogs’ ears and tails for humans’ cosmetic whims is still legal. 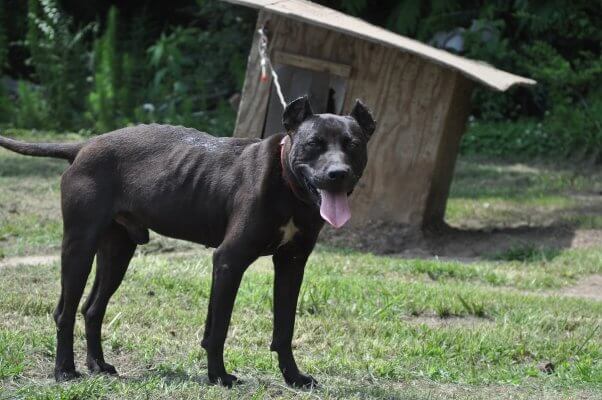 These cruel, disfiguring surgeries serve no medical purpose and cause dogs immense suffering. Puppies are normally very young when unscrupulous owners and vets decide to mutilate their body parts. The agony of the amputations, along with the pain that the animals endure as their cropped ears are taped and re-taped to force them to stand erect, can result in long-lasting trauma.

“[E]ar-cropping and tail-docking are not medically indicated nor of benefit to the patient. These procedures cause pain and distress and, as with all surgical procedures, are accompanied by inherent risks of anesthesia, blood loss, and infection.”

Still, the American Kennel Club and breeders perpetuate the idea that certain breeds “need” to be mutilated to be beautiful.

You can help stop this cruelty! Never subject your animal companions to disfiguring surgeries, including ear-cropping, tail-docking, and declawing. And always intervene when you hear someone considering these procedures for their animals.