Start Your Morning Right With One of These Vegan Breakfast Sandwiches

When you’re rushing around in the morning, sometimes breakfast gets brushed aside. That’s why it’s convenient to have vegan options at fast-food and chain restaurants for the most important meal of the day—especially a warm, savory option like a vegan breakfast sandwich. The chains below have listened to customer demand and introduced meat-, egg-, and dairy-free breakfast sandwiches that are delicious and satisfying.

Try the vegan breakfast sandwiches at these popular restaurant chains:

The Everything Plant-Based Sandwich at Peet’s Coffee launched after a push from PETA. It’s vegan without modifications, featuring a plant-based egg, Beyond Meat breakfast sausage, and a slice of Violife vegan cheddar cheese on a thin “everything” bagel.

Following talks with PETA, Dunkin’ was one of the first chains to launch a breakfast sandwich with a delicious vegan Beyond Meat sausage patty. Order the Beyond Meat Breakfast Sandwich without chickens’ eggs or cheese made from cow’s milk at select locations. Add a side of hash browns and an oat milk latte for a satisfying meal. 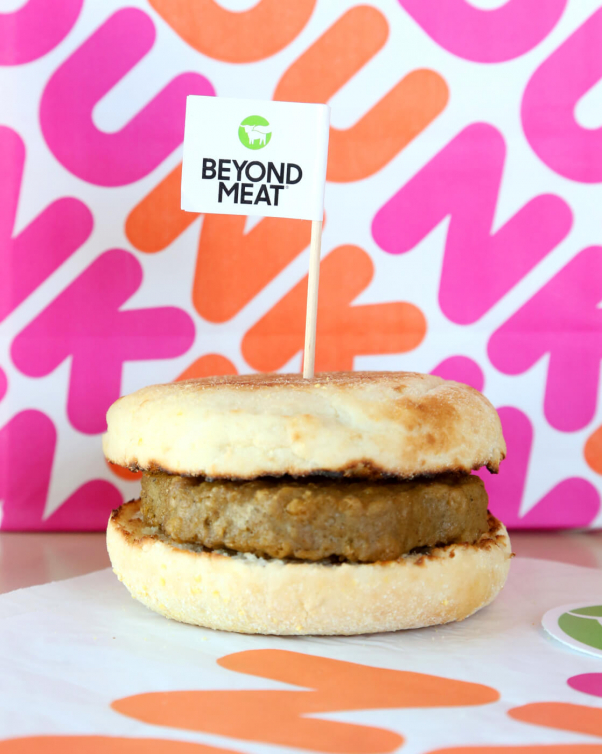 Canadian chain Globally Local has nine different vegan breakfast sandwich options that are available all day, including the Sausage Maple Crunch, which is stacked with a sausage patty, tofu “egg,” and hash browns with vegan cheddar cheese and maple syrup.

A post shared by Iconic Fast Food Made Vegan (@globallylocalfastfood)

Some Philz Coffee locations serve a vegan breakfast sandwich, complete with a Beyond Breakfast Sausage patty, vegan cheese, and an animal-free egg.

This vegan fast-food chain in Southern California offers six vegan breakfast sandwich varieties, four of which can be served on either an English muffin or a vegan croissant. You can even substitute a vegan fried egg for the omelet-style patty.

Some Starbucks locations are testing the Plant-Based Breakfast Sandwich, which features an animal-free breakfast patty, plant-based egg, and melted vegan cheddar cheese on a toasted whole wheat English muffin. We’re excited for Starbucks to expand this offering and drop its unfair surcharge for vegan milks.

When you go vegan, you save the lives of nearly 200 animals per year. This includes cows, chickens, pigs, fish, and many other animals bred and killed for food. Find out more about the impact of going vegan: