Knowing what we know about human biology today, you’d think tormenting another animal for “research” would be inconceivable in laboratories. Ninety percent of basic research, most of which involves animals, fails to lead to treatments for humans. At least 95% of all drugs that are shown to be safe and effective in experiments on animals fail in human trials. The evidence is clear: Other animals are poor models for researching diseases that affect humans.

Yet other primates, along with millions of cats, dogs, mice, rats, rabbits, and other animals, are still trapped in laboratories across the country right now. Experimenters subject them to painful, invasive procedures, confine them to lonely and barren cages, and deny them important social relationships—all for unreliable and useless “research.” Then, after experimenters are done exploiting them, they often kill them as if these sentient beings were just disposable lab equipment. 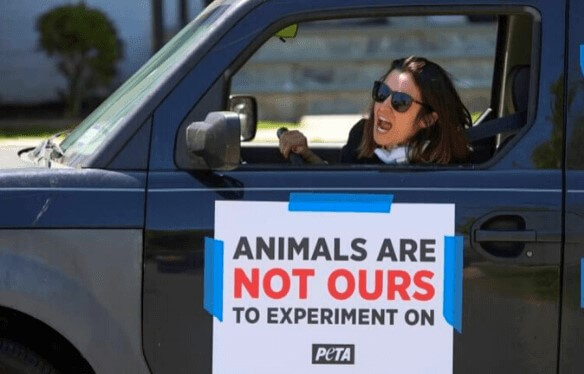 National Institutes of Health (NIH) experimenter Elisabeth Murray burns through taxpayers’ dollars to traumatize intelligent, social monkeys. In her twisted “emotional responsiveness” tests, she saws open and injects toxins into monkeys’ skulls to burn brain cells or suctions out parts of their brain. Then, after placing the animals inside a cage with no room to hide or escape, she torments them with their worst fears—a fake but realistic-looking rubber snake or spider—just to see how they’ll react. When she’s through with them, she kills them.

Records obtained by PETA document that in 2019 alone, Murray used 132 monkeys in these experiments. While her cruel tests have caused extreme harm and trauma to all the animals she has used, the records specify that 72 of these monkeys were used in experiments that are known to cause pain.

Laboratories across the U.S. subject mice to barbaric sepsis tests reminiscent of the horror film The Human Centipede. To induce sepsis in mice, experimenters may stitch mice together along the length of their bodies and inject toxins into them, puncture the animals’ intestines so that fecal matter and accompanying bacteria leak into their stomachs, insert a stent into the animals’ colons so that fecal matter leaks out continuously into their bodies, or use other egregiously cruel methods. This is despite the fact that a landmark 2013 study revealed that the results of sepsis experiments done on mice don’t apply to humans, because sepsis is a different disease in mice.

Menopause Tests on Marmosets at UMass

A University of Massachusetts (UMass) laboratory performs invasive surgeries on female marmosets in a ridiculous attempt to study menopause—which marmosets don’t even experience—in humans. Experimenters drill holes into the skulls of marmosets, thread electrode leads through their abdomens, and zip-tie them into restraining devices. To simulate menopause in these sensitive monkeys, experimenters surgically remove their ovaries and then use hand warmers on them to mimic hot flashes. UMass abruptly shut down good-faith negotiations with PETA that were aimed at reducing the use of animals in experiments and modernizing its research program.

Experimenters at Johns Hopkins University cut into the skulls of barn owls, insert electrodes into their brains, force them to look at screens for hours a day, and bombard them with noises and lights. The laboratory pretends that doing this will tell us something about attention-deficit/hyperactivity disorder in humans.

Sex Experiments on Sparrows at LSU

At Louisiana State University, experimenter Christine Lattin removes sparrows from their natural homes, pumps them full of sex hormones, releases them, and then torments them with terrifying calls from predators. These sounds can leave the highly social birds—who just want to raise and care for their young—in serious distress. At the end of the breeding season, Lattin recaptures and kills all the birds and their babies and then removes their brains for analysis.

Help All Animals Suffering in Laboratories

There are easy ways to help animals suffering in experiments. Take action for them now: