Cassie Randolph found true love and reality show fame on TV’s biggest guilty pleasure, The Bachelor. Now, she’s using her newfound celebrity status and her compassion for animals to speak up for orcas and bottlenose dolphins imprisoned at SeaWorld.

See her stunning anti-captivity ad below: 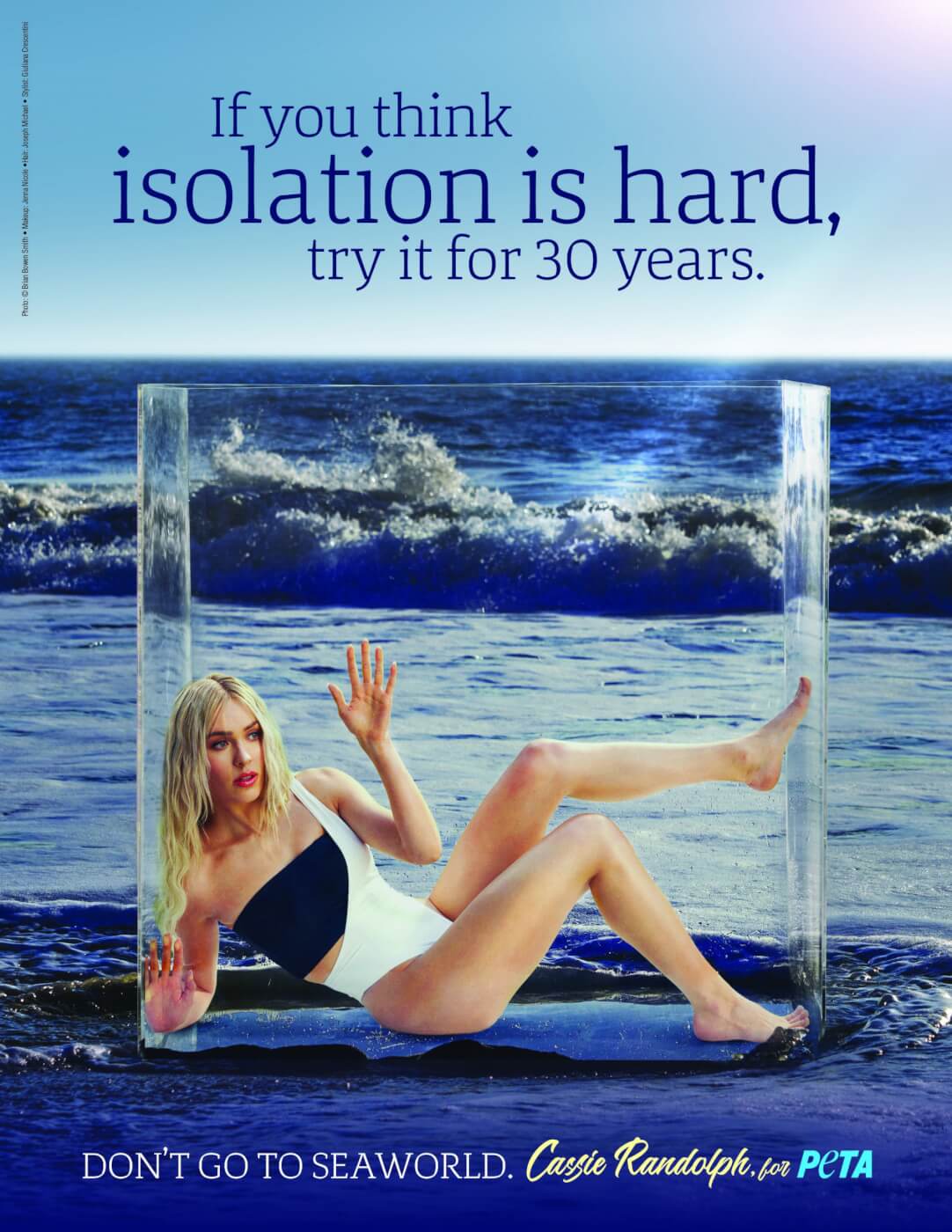 True to her California roots, Cassie is an avid surfer with a deep appreciation for marine animals and their natural habitat. In addition to helping whales and dolphins, the 24-year-old also has a huge heart for animal companions: She’s a regular foster mom, and she helps combat animal overpopulation by promoting #AdoptDontShop!

In her behind-the-scenes interview with PETA, the SoCal native talks about the way a shared compassion for animals helped her bond with her current partner, Season 23 Bachelor star Colton Underwood.

“When I’m out there on the beach and in the ocean surfing and stuff, sometimes I’ll see dolphins,” she says. “And the fact that people would take them from their natural environment and their families and their life is just so sad, because really, people are doing it for money and for entertainment.”

If you think isolation is hard, try it for 30 years.

Cassie is speaking out against marine parks like SeaWorld at a time when many people are going into seclusion because of the COVID-19 pandemic, caused by the novel coronavirus, whose origin has been traced back to the human use of animals for food. However, our self-isolation to prevent the spread of the disease is nothing compared to the forced confinement endured by marine mammals at SeaWorld and other marine parks. Case in point: Can you imagine having to stay in your bedroom for 50 years? Corky the orca doesn’t have to imagine it—she’s spent the last five decades inside a concrete tank, imprisoned longer than any other orca.

Orcas are a highly intelligent and social species, who often stay with their families for life. They work together to search for food, and in some populations, they rarely leave their mother’s pod. Bottlenose dolphins have extremely complex communication signals and enviable memories. Yet at these abusement parks, complex marine mammals are denied everything that’s natural and important to them and forced into a lifetime of “quarantine.” In fact, SeaWorld is taking the opposite approach to social distancing by forcing about 140 dolphins to live in just seven cramped concrete tanks.

Help Save the Whales and Orcas by Telling SeaWorld to Send Them to Sanctuaries!

The Whale Sanctuary Project has plans to build a 40-hectare seaside sanctuary for rescued orcas and beluga whales in Nova Scotia, Canada. PETA is asking SeaWorld to retire the marine mammals held captive at the parks and let them move to a true sanctuary that can give them some semblance of the life that was stolen from them.