Days after PETA member Regan Russell was killed by a pig-transport truck during a peaceful protest outside a Toronto-area slaughterhouse, PETA managed to save two pigs from an Iowa factory farm in her honor. This new PETA video, released today, shows the piglets (now named Regan and Russell) traveling to Arthur’s Acres Animal Sanctuary in New York.

“We must do more to ensure that these sweet pigs from the heart of the pork industry are not going to be the only ones who live out the rest of their lives at a sanctuary, choosing when to frolic, where to forage, and how to spend their time,” says PETA President Ingrid Newkirk. “PETA encourages everyone to show kindness to all living beings and to honor Regan Russell’s legacy of compassion by going vegan and getting others to join you.”

On the morning of Friday, June 19, Regan Russell was run over by a pig-transport truck while peacefully protesting the plight of pigs crowded together in a hot metal truck about to be slaughtered. The Toronto Pig Save activist and longtime PETA member opposed all forms of oppression and spent her last moments showing kindness to pigs whose own lives were about to be taken. The affection that she showed them as they were being trucked to their deaths was likely the only affection they ever experienced. In Regan’s honor, a PETA staffer persuaded a farmer in Iowa, the nation’s pork-producing capital, to spare two pigs from slaughter—and we’re retiring them for life.

Rescues Regan and Russell will be able to live the life they’ve always deserved, thanks to PETA and @ArthurAcres Animal Sanctuary ❤️ #SavePigs4Regan https://t.co/njApQY0xCQ

The photo and videos above show the pigs, now named Regan and Russell, on their way to and arriving at Arthur’s Acres Animal Sanctuary, where they’re being fostered in the hope of becoming permanent residents. They’re safe at last—their wretched ear-punch tags will be removed and they’ll be able to frolic, wallow, forage, and enjoy the companionship of other pigs.

We can all show kindness to pigs—who have been known to save the lives of others, including their human friends, and even have fun playing tricks on each other—and honor Regan’s memory by working hard to persuade people to stop eating them.

To thank the Iowa farmer for his kind act, we gave him a gift basket filled with vegan goodies, and we also pleaded with him to get out of the animal-killing business and get in on the booming market for vegan food, as an increasing number of others have. Recently, former pig-farm worker Justin Reineke from Manitoba, Canada, decided that he couldn’t witness pigs’ suffering any longer and is now helping others go vegan, too.

Whether you’re a farmer or a consumer, now’s the time to run from the cruel and filthy meat industry.

Regan knew how, in the pork industry, mother pigs are squeezed into narrow metal stalls barely larger than their bodies and kept almost constantly pregnant or nursing. Pigs’ tails are chopped off, their teeth are cut with pliers, and males are castrated—all often without any pain relief. On transport trucks, even on burning-hot days (like the day Regan was killed), pigs are “packed in so tight, their guts actually pop out their butts—a little softball of guts actually comes out,” a former pig transporter told PETA. Once at slaughterhouses, they’re hung upside down—some are still conscious—and their throats are slit, after which they bleed to death. 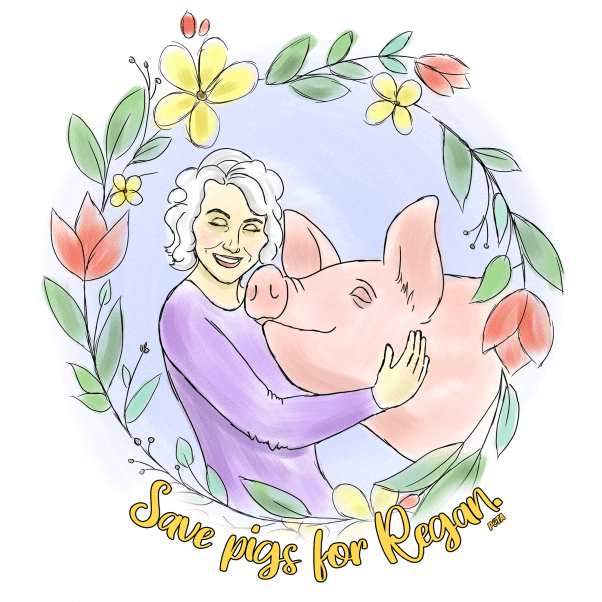 Each person who goes vegan saves the lives of nearly 200 animals each year. How many people can you help make that switch? It will happen if you set out to do it.

Save Pigs for Regan

We hope the loss of this wonderfully kind soul will bring more attention to the plight of the oppressed. But we must not just pay attention—we must act and quickly. Everyone can honor Regan and all the pigs who’ve been killed for food right now simply by taking any of the following actions:

Haven’t gone vegan yet? Click on the button below to order a free vegan starter kit that’ll help make it even easier than it already is.