From PETCO to PETA: A Former PETCO Employee Speaks Out 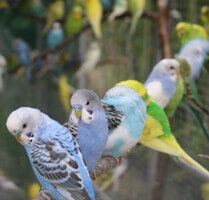 The following article was written by Alicia Woempner.

As a vegetarian college student who loved animals, I was thrilled to be offered a summer job at PETCO. I was excited to spend my days talking to animal guardians and meeting their furry companions who often accompanied them to the store and to care for the birds, reptiles, fish, guinea pigs, and other small animals there. However, I quickly realized that this store that had seemed like heaven to me was actually hell for the animals who lived there.

The first shock came when I noticed a large open wound on the face of a small white mouse. Immediately informing my supervisor, I was told not to worry about it because the animal was “just a feeder mouse.” PETCO, you see, stocks live mice and rats to be sold as food for “pet” snakes. Mice and rats who are thrown into a cage with a snake may spend hours or even days shaking in terror before the snake finally gets hungry enough to eat them (which may or may not happen), and they can even attack and harm the snake in an attempt to defend themselves. I’ll never forget how horrified I was every time a customer came into the store wanting to buy a “feeder mouse” or rat, knowing that I was responsible for condemning to terror and a horrifying death whichever mouse or rat I was able to catch and wrestle into a cardboard box. I began to notice ill or injured “feeder mice” on a daily basis, and having lived with a companion mouse, I was heartbroken seeing how much suffering these intelligent, affectionate animals were enduring at a store that claims that “animals always come first.”

PETCO also sells live “feeder fish” for turtles and reptiles people keep as captive “pets.” These small goldfish are kept by the hundreds in huge, severely crowded tanks with no enrichment. The death toll was so high at the store I worked at that part of the closing procedure every day was to take out the dead “feeder fish” who had been sucked into a filter, wrap them in a plastic bag, and place them in the “dead” freezer, along with dead rats, mice, hamsters, birds, and other casualties. There were so many fish in the filter every day that it was impossible to separate those who were still alive and breathing but too weak to swim out of the filter, so they were thrown in the freezer with the dead ones. (I don’t know whether they suffocated or froze to death first.) Of course, we also took a daily “dead count” of all the aquarium fish as well since they, along with the other animals in the store, are seen by the company as disposable commodities.

One of the most gruesome incidents that I witnessed was the result of the intensive confinement to which the animals in the store are subjected. Birds, who in nature would fly, migrate, nest, and raise their own families, are kept in crowded cages and denied the opportunity to engage in their natural behavior, which can cause them to go crazy. One night after closing, I heard a cacophony of squawking from the parakeet cage. Running over, a fellow employee and I found that one parakeet had become the victim of frenzied pecking from cagemates—the other birds had pecked all the flesh off the top of the animal’s head, leaving the skull completely exposed. I begged to be allowed to take the bird to a 24-hour veterinarian to be mercifully euthanized, and eventually I was allowed to do so but only after precious minutes had been wasted on the phone requesting permission to spend the extra money on an emergency vet. By the time I got to the doctor, the parakeet had died. I’ll never forget that bird.

The store’s “merchandise” can also be “damaged” by careless employees. One individual I will always remember was a tiny baby chameleon whose back was broken when a worker accidentally slammed the animal’s cage door shut. The chameleon died the next day without the dignity of euthanasia.

These are only a handful of the incidents that I witnessed as a PETCO employee, but undercover investigators have also revealed horrific animal abuse at the breeding facilities that supply PETCO and PetSmart, among others. I urge you to learn more about the horrific pet-trade industry. As you can imagine, I didn’t last very long in that job, but I will always regret having been in that small way a party to such a cruel industry. I hope you will join me in boycotting retailers like PETCO and PetSmart that still sell animals and that you will make a commitment always to adopt and never buy companion animals.