For years, PETA has been campaigning to persuade Levi Strauss & Co. to stop supporting animal abuse and the environmentally destructive leather industry. PETA even purchased Levi’s stock in 2019 to work our way into the company’s annual meetings, where we can influence the brand’s owners and executives from the inside. At previous Levi’s annual meetings, we urged the denim giant to stop using leather patches—a practice that violates the company’s sustainability policies. Now, we’re taking a new approach.

Because Levi’s continues to use leather even after hearing from PETA that defenseless cows are beaten and killed, we’ve submitted a new shareholder resolution that would have the brand commission a report on the slaughter methods that its suppliers use to obtain leather for its patches, belts, wallets, and other items. That way, Levi’s could see clearly how the methods do not conform to its own animal welfare policy.

Levi’s claims that animals in its supply chain enjoy freedom from fear and distress. But cows in the leather industry are torn away from their mothers and endure extreme confinement, branding, tail-docking, and castration before being transported up to hundreds of miles on crowded trucks to slaughterhouses, where they’re strung up and skinned, often while still conscious.

PETA makes it easy to contact companies and urge them to do their part to help alleviate animal suffering.

It only takes a minute using your phone or computer, so what are you waiting for?

Levi’s shareholders received the greeting of a lifetime today, as they arrived for the denim brand’s annual meeting. PETA supporters gathered outside Levi’s San Francisco headquarters to protest the company’s continued use of leather patches and faithless claims that “empathy” and “sustainability” are among its core values. 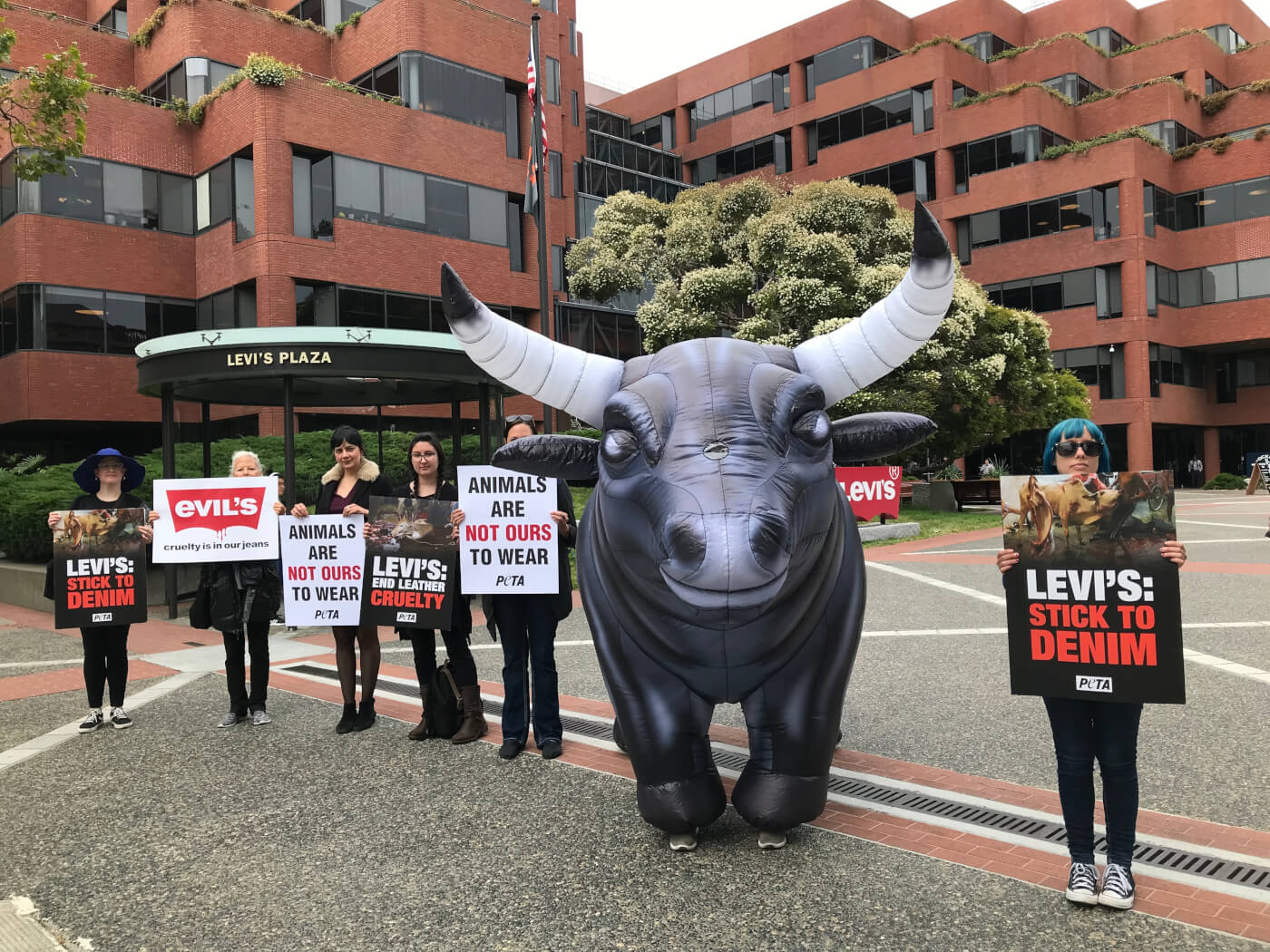 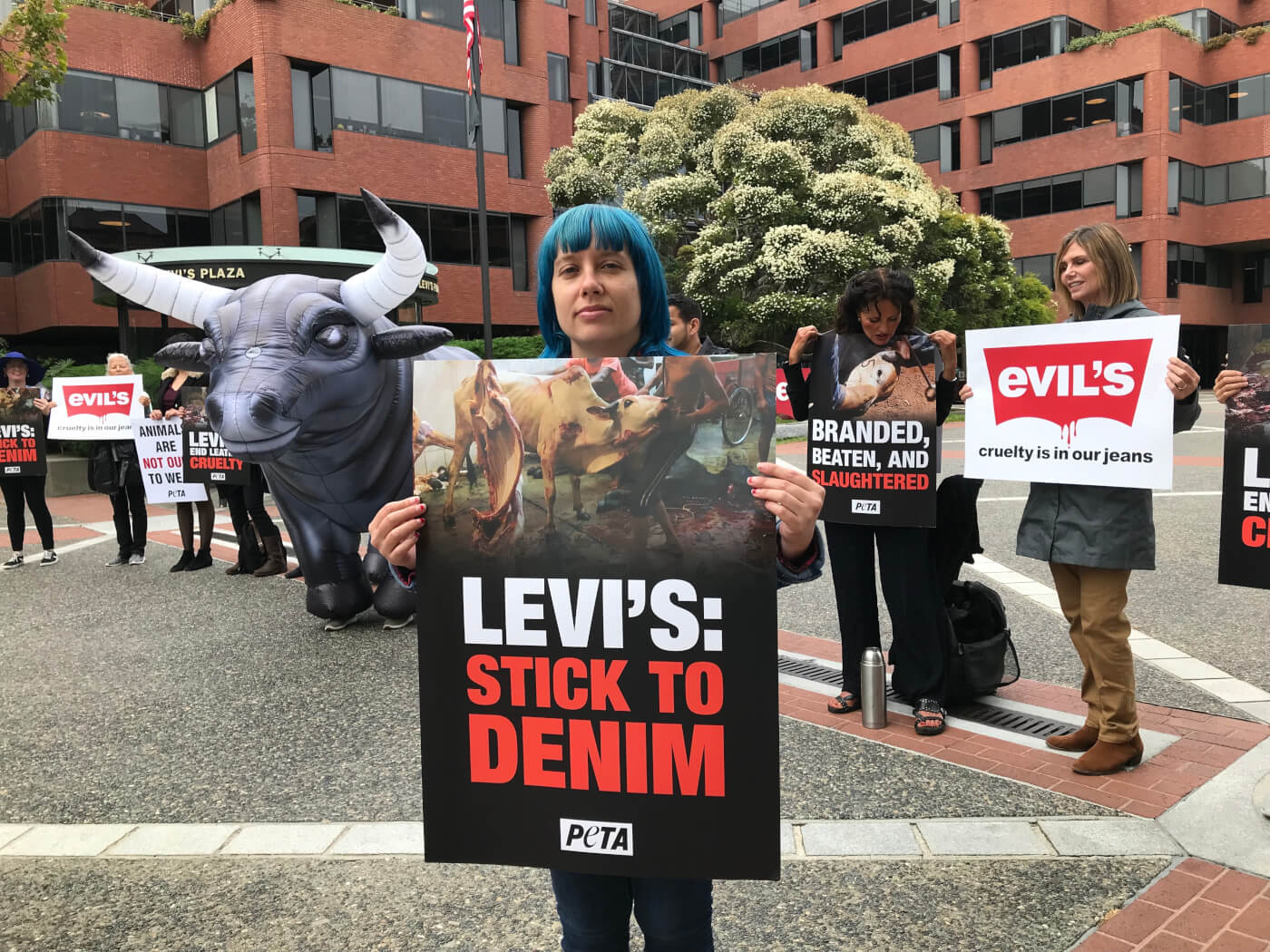 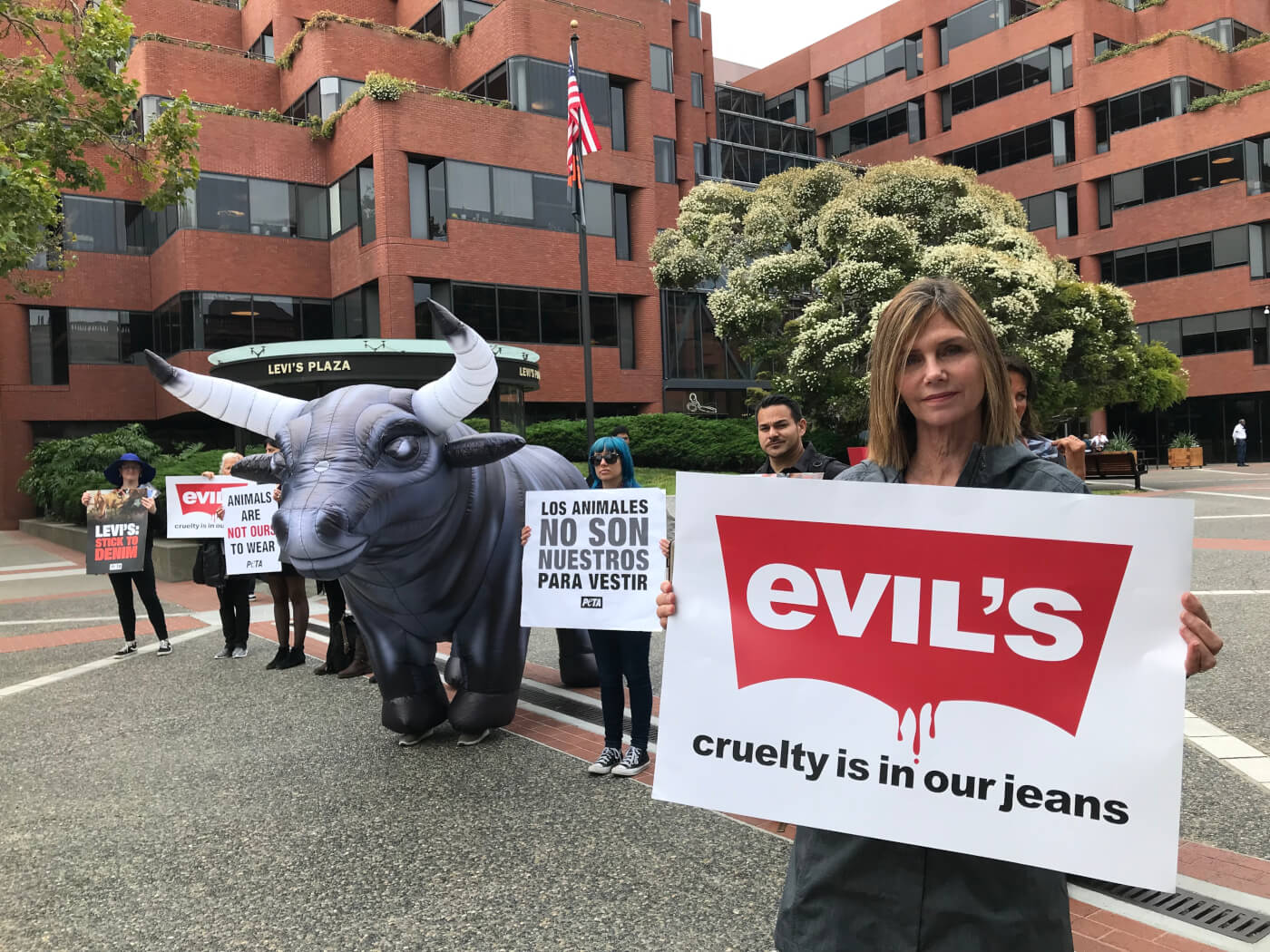 During the meeting, a representative of PETA—which owns stock in Levi’s in order to push for animal-friendly policies—asked when the company intends to stop using animal leather on its patches, noting that a PETA exposé of the world’s largest leather processor showed that cows and bulls were branded on the face, electroshocked, and beaten. In addition, animal agriculture—which includes the leather industry—is responsible for 14% to 18% of all greenhouse-gas emissions.

No leather patch is worth beating, slaughtering, and skinning a sensitive cow.

We’re calling on Levi’s to live up to its claims of being a sustainable company by ditching leather in favor of eco- and animal-friendly vegan fabrics.

Join Us in Urging Levi’s to Use Vegan Leather

As part of our campaign to persuade Levi’s to use vegan leather patches on its jeans instead of ones made of cow skins, we’ve purchased the minimum number of shares in the company required to submit shareholder resolutions and to attend and speak at annual meetings.

Gentle cows are beaten, slaughtered, and skinned—all so that Levi’s can tack a small, completely nonfunctional patch on the back of some of its jeans. The company claims to prioritize sustainability, but we know that using cows’ skin has at least three times the negative environmental impact that using most vegan leather does. So we’re heading to Levi’s boardroom to urge the company to stop peddling these patches, which cause cows immense pain and suffering and damage Mother Earth.

Cows killed for leather often endure extreme crowding as well as castration and tail-docking without pain relief. A PETA exposé of the world’s largest leather processor revealed that gentle cows and bulls were branded on the face, electroshocked, and beaten before being killed. In addition, animal agriculture—which includes the leather industry—is responsible for 14 to 18 percent of all greenhouse-gas emissions.

Cows want you to know: @LEVIS patches are a pain in the ass! Levi’s claims to be sustainable, but they still use leather patches on their denim, even though cow skin leather has at least 3X the negative environmental impact of vegan leather. https://t.co/f3aogu9Y0p pic.twitter.com/n2dwFmbQjj

PETA activists previously protested Levi’s use of leather at the retailer’s headquarters in San Francisco:

TODAY: PETA supporters are at @LEVIS' headquarters in #SanFrancisco with a LOUD message for the company—drop leather patches on your denim for #vegan versions! ✊ https://t.co/asIWlGu8YD pic.twitter.com/ZEo9TpKzLD

We also created a video exposing the cruelty inherent in the leather industry:

These efforts have been paying off. More than 200,000 kind folks have signed our petition urging Levi’s to replace its animal skin with vegan leather immediately, and you can join them.

Dear @LEVIS: THIS is where leather comes from. Behind each one of your leather patches is the PAIN and SUFFERING of animals.

Click below to call Levi’s out on its absurd sustainability claims—remind the company that the most effective way to reduce its environmental impact is to source vegan materials:

Urge Levi’s to Use Vegan Leather