7 Facts About Leather Guaranteed to Make You Hate It

If you wear or have ever worn leather, you definitely need to read this.

Cows are intelligent, sensitive animals who feel pain, just as dogs and cats do. They develop complex relationships and get excited when they achieve a goal. They also mourn the deaths of their friends and prefer to sleep close to family members.

But those used by the leather industry endure immense cruelty during their short lives.

1. Cows are subjected to mutilations that rival medieval torture.

They’re commonly castrated and branded with hot irons, and their tails are cut off—all without any painkillers. This abuse starts when they’re very young. 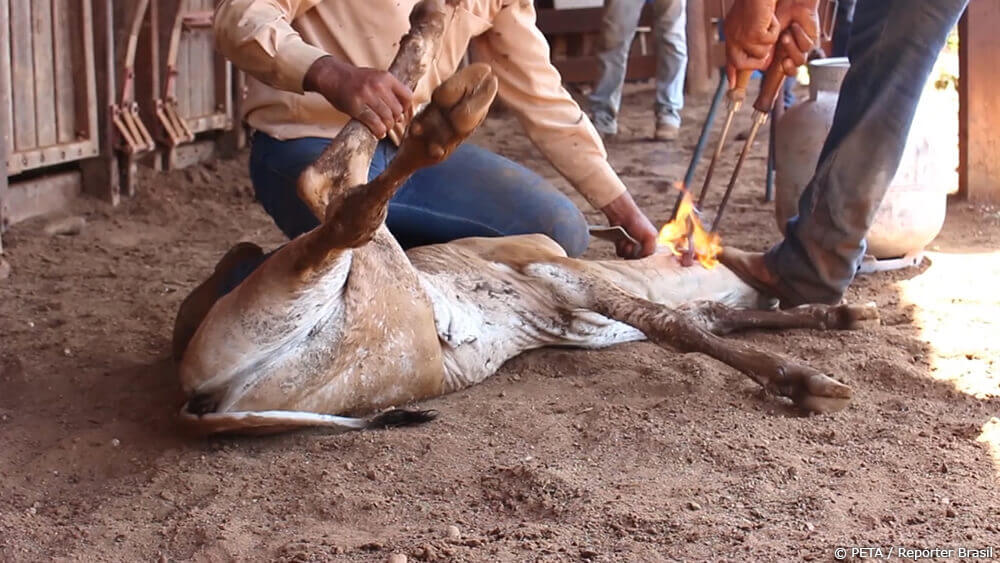 Shortly after birth, workers drag calves away from their mothers before throwing them onto the ground to punch holes in their ears. A PETA video exposé of cattle ranches in Brazil revealed that workers also branded calves’ faces with hot irons while standing on their heads to hold them still.

Workers were also caught on camera electroshocking cows and hitting and jabbing them with metal-tipped sticks. Severe crowding caused the animals to panic and trample each other as workers kicked them and yanked their ears and tails.

2. Calves are torn away from their mothers … if they survive that long.

Without human intervention, calves suckle for nearly a year, but premature separation of mother and calf is standard practice on farms worldwide.

Even unborn calves—whose skin is considered a “luxury” material—are mutilated for leather. Some are purposely aborted, while others are cut out of the bodies of slaughtered pregnant cows.

3. When cows are on the brink of collapse, their tails are deliberately broken at each joint, and tobacco and chili peppers are rubbed into their eyes in order to force them to keep moving.

Much of the leather sold in the U.S. is imported from India, where cows are commonly marched hundreds of miles to slaughter in the heat and dust, without food or water. Those smuggled by truck from India to Bangladesh are bound with ropes, and vehicles are often so crowded that the animals can barely move. They arrive emaciated, exhausted, and sometimes so malnourished that they can’t stand up. Many sustain broken bones, suffer from eye infections, and have open wounds. 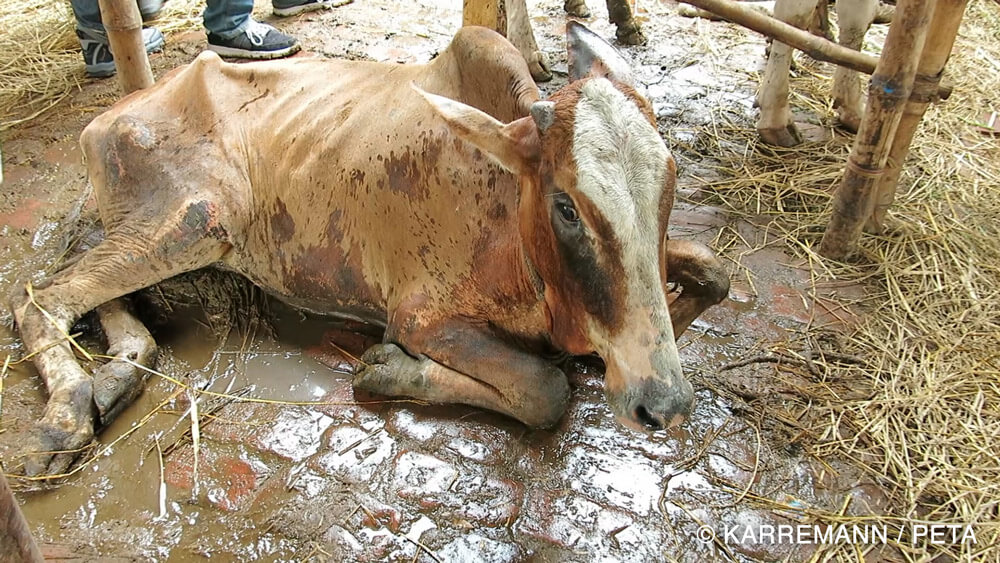 Even if a leather item’s label says that it was made in Italy or the U.S., the raw materials may have come from India or China (where conditions are no better).

4. Cows have no choice but to watch as workers kill their friends and family.

In India, slaughterhouse workers throw cows to the ground, bind their legs, and slit their throats—all in full view of other cows. As seen in PETA’s video exposé of Bangladesh’s billion-dollar leather industry, cows are sometimes still alive and kicking as their skin is torn off. 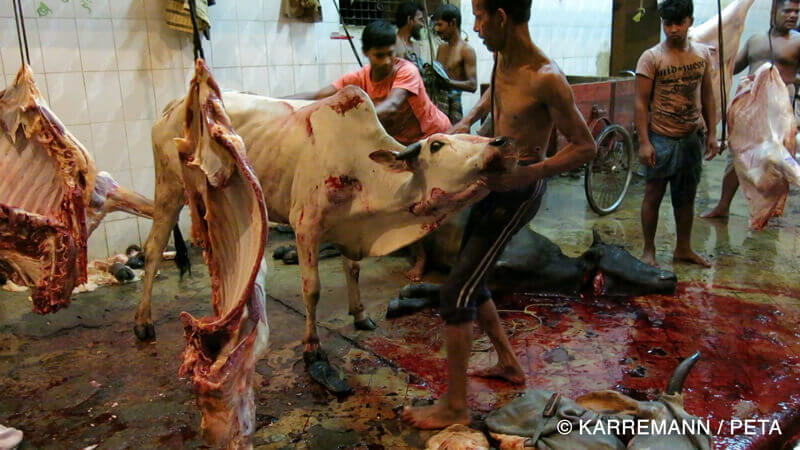 5. Cows are commonly killed at between just 1 and 5 years old, a fraction of their natural life expectancy.

Farmed cows are killed well short of their approximately 20-year life expectancy. In U.S. slaughterhouses, animals are shot in the head with a captive-bolt pistol, hung upside down by a hind leg, stabbed in the throat, and bled to death. Many animals aren’t properly stunned and are dismembered and skinned while still conscious.

6. Skins are preserved with toxic chemicals.

Without tanning, leather shoes would rot right off your feet. Animal skin is turned into finished leather by the application of a variety of dangerous substances, including mineral salts, formaldehyde, coal-tar derivatives, and various oils, dyes, and finishes—some of them cyanide-based. 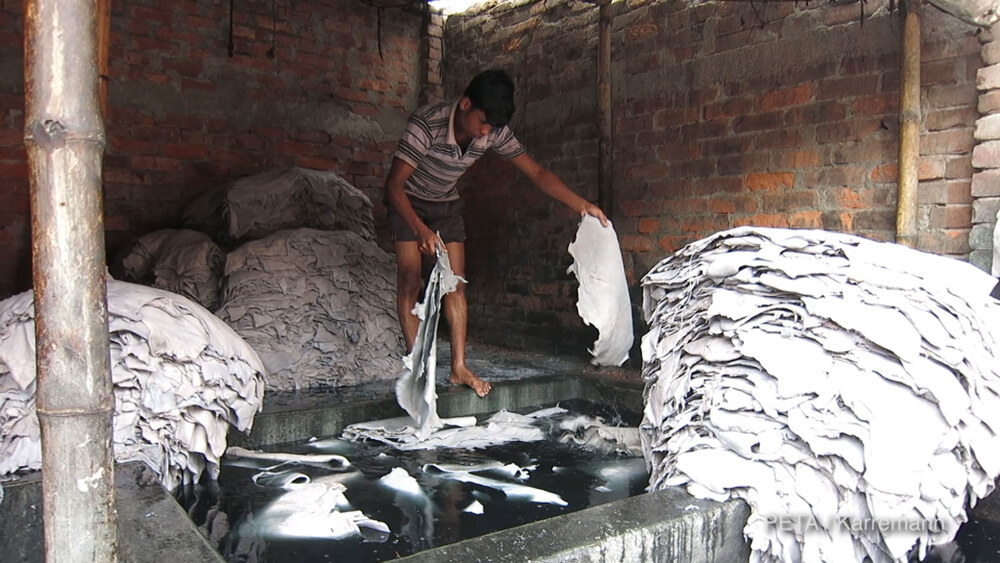 Most leather is chrome-tanned. All waste containing chromium is considered hazardous by the U.S. Environmental Protection Agency. The Centers for Disease Control and Prevention found that the incidence of leukemia among residents near a tannery in Kentucky was five times greater than the U.S. average. Studies of leather-tannery workers in Sweden and Italy found cancer risks “between 20% and 50% above [those] expected.”

7. Every year, more than a billon animals are killed for their flesh and skin.

Leather is the most valuable co-product of the meat industry, which means that it contributes directly to the horrors of factory farming and the slaughter of countless animals each year. 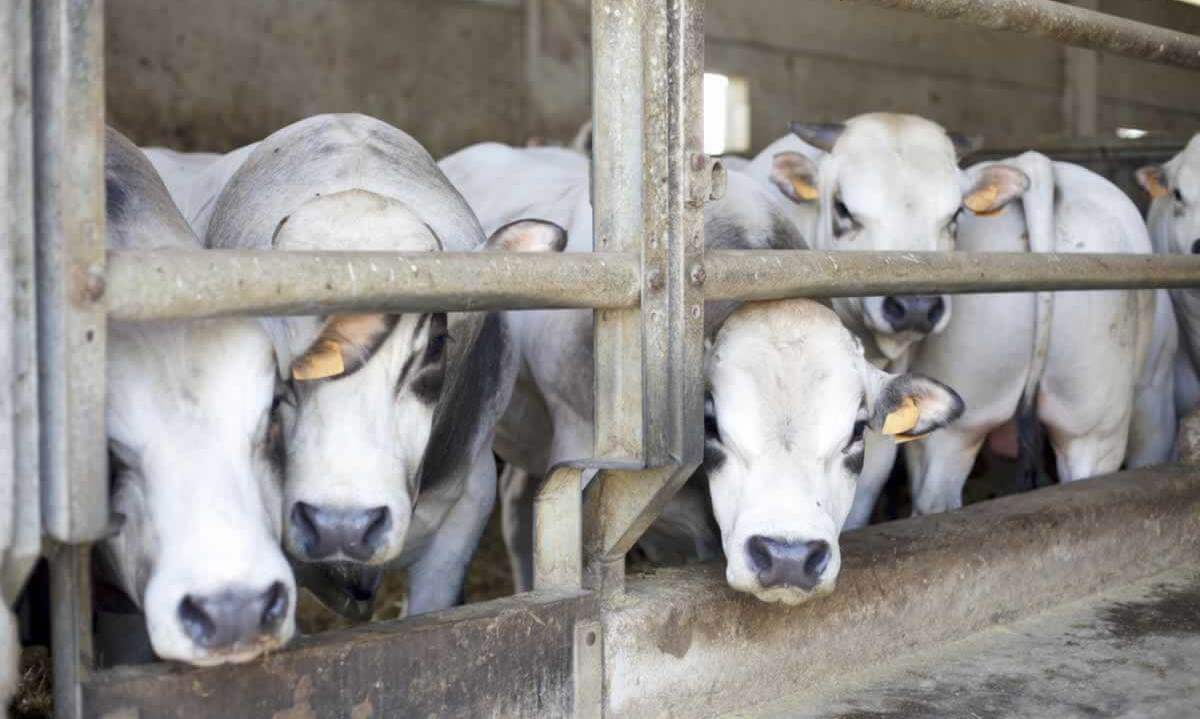 Cruelty Is a Choice

We all choose whether to support kindness or cruelty when buying a new jacket or pair of shoes. Wear vegan every day and help stop the global skins trade.