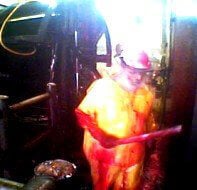 Kosher slaughter is intended to minimize animals’ suffering. But undercover PETA investigations have revealed that Agriprocessors, the world’s largest glatt kosher slaughterhouse, has been ignoring both the Jewish commitment to compassion and federal law—and animals endure prolonged suffering and nightmarish deaths as a result.

What Happens in Kosher Slaughter

All slaughter is terrifying for the animals and involves pain and suffering, but kosher slaughter, when performed according to Halacha (Jewish law), is intended to minimize animals’ suffering.

Kosher slaughter, or shechita, is performed by a person known as a shochet, who has received special education and instruction in the requirements of shechita. The shochet kills the animal with a quick, deep stroke across the throat with a sharp knife. When performed properly, shechita appears all but painless and quickly renders the animal unconscious.

When PETA received complaints that this wasn’t the case at Agriprocessors—a massive Iowa slaughterhouse that produces Rubashkin’s, Aaron’s Best, and Iowa’s Best meats—and that both kosher law and federal law were being violated, we took action.

A History of Abuse

PETA wrote to company officials and asked them to take steps to make certain that cruelty was not occurring. Agriprocessors’ attorney, Nathan Lewin, wrote back to us, claiming that “neither Jewish law or ‘common decency’ is being violated in the Agriprocessors plant.” The tone of this letter was not convincing, so we sent an undercover investigator to see for ourselves.

PETA’s first investigation at Agriprocessors in 2004 revealed almost 300 instances of inhumane slaughter, in which cows’ sensitive faces were shocked with electric prods, fully conscious cattle had their tracheas and esophagi ripped from their throats with meat hooks or knives, and they writhed in pools of their own blood, trying desperately to stand up for up to three minutes as blood poured from their throats. Read our investigator’s notes.

Rabbis, scholars, animal welfare experts, and U.S. Department of Agriculture (USDA) inspectors have all spoken out about the extreme cruelty that our undercover investigator was able to capture on tape. The world’s foremost expert on slaughter methods, Dr. Temple Grandin, told Mason City, Iowa’s Globe Gazette, “I thought it was the most disgusting thing I’d ever seen. I couldn’t believe it. I’ve been in at least 30 other kosher slaughter plants, and I had never ever seen that kind of procedure done before. … I’ve seen kosher slaughter really done right, so the problem here is not kosher slaughter. The problem here is a plant that is doing everything wrong they can do wrong.”

The USDA told the plant to immediately stop this procedure and determined that Agriprocessors employees “had engaged in acts of inhumane slaughter.” The Orthodox Union (OU), the agency that certifies Agriprocessors’ products as kosher, also told Agriprocessors to stop removing the cows’ tracheas and to stun any animals who remained conscious after throat-slitting.

In light of the cruel conduct at Agriprocessors, PETA also investigated Local Pride, a slaughterhouse in Gordon, Nebraska, that was owned by the Rubashkins (the owners of Agriprocessors) in May 2007. We found that cows were still allowed to remain conscious and in extreme pain for up to two minutes after their throats were slit.

Experts in animal welfare, veterinary medicine, and slaughter systems reviewed the disturbing footage recorded inside the slaughterhouse and noted the following:

PETA’s footage led several experts to condemn the company’s practices. Dr. Holly Cheever, a large-animal veterinarian, stated, “This method of slaughter as depicted on this tape is brutal and should be amended to provide a humane end for these animals.” The USDA inspected Local Pride, and management agreed to stop using the node hook on conscious cows.

PETA returned to Agriprocessors in Postville, Iowa, in August 2008 and caught workers continuing to make “second cuts” (hacking holes in the open wounds in cows’ necks after the shochet had already cut their throats). Dr. Temple Grandin has stated that these gouging, circular cuts cause the cows pain and suffering.

Just two weeks prior to PETA’s August 2008 undercover investigation, Agriprocessors gave a private tour to selected rabbis, community leaders, and reporters, and video footage from that tour shows slaughter done without a second cut at all. When Dr. Grandin inspected the facility in 2006, the plant showed her slaughter that did not include a second cut at all, and she gave them her approval. It appears that Agriprocessors wanted consumers to believe that the plant had stopped the second cut, but PETA’s new investigation revealed that, behind closed doors, not much had changed. The USDA again cited Agriprocessors for violating the Humane Methods of Slaughter Act.

In light of this new video exposing the gouging second cuts—and Agriprocessors’ quite different conduct during the tour—Dr. Grandin made a new assessment of Agriprocessors, stating, “The undercover video clearly showed that when they think nobody is looking, they do bad things in this plant.” Dr. Grandin asserted that the plant should install a live video monitor to be reviewed by a third party auditor to prevent further cruelty.

Cows aren’t the only ones who are being abused by Agriprocessors. The people who work there are often treated like machines, too, and denied health care. The Jewish newspaper The Forward published an article detailing the horrors of working conditions at the Agriprocessors slaughterhouse, including virtually no safety training, severe injuries that required amputations, frequent verbal harassment, and very low wages. OSHA cited Agriprocessors for 39 worker safety violations in March 2008. After a May 2008 federal raid of the plant over immigration violations, 76 percent of the 968 Agriprocessors employees were found to be using false or fraudulent Social Security numbers that were allegedly supplied by plant management. Agriprocessors also pleaded guilty to 83 counts of child-labor violations.

Agriprocessors declared bankruptcy and former owner Sholom Rubashkin was sentenced to 27 years in federal prison for financial fraud. The plant is now under new ownership and operates as Agri Star.