Did you think our species had finally evolved to treat all dogs kindly? Think again. Speciesism persists in the various ways animals are exploited for entertainment. The Iditarod, an annual dog-sled race in Alaska notorious for forcing dogs to run through extreme snowstorms and grueling terrain, is the opposite of compassionate fun. Even if you thought you’d heard everything about this cruel event, here are five Iditarod facts—we bet you’ll be shocked to learn they’re still true—that will inspire you to take action.

1. Up to half the dogs who start the race never make it across the finish line due to exhaustion, illness, injury, or other causes.

BREAKING: Notorious Iditarod musher Hugh Neff was apparently forced out of the deadly race after his dogs, suffering from diarrhea, were reportedly found in such poor condition that they couldn’t continue.

Neff was banned in 2019 after his dog died during a similar race. pic.twitter.com/0kOkFcRrIA

Many dogs develop stomach ulcers, sustain stress fractures, or suffer from dehydration or diarrhea during the race. In 2022 alone, nearly 250 dogs were pulled off the trail, forcing those remaining to toil even harder to pull heavy sleds. Notorious musher Dallas Seavey admitted that during the first half of the race, the dogs he was forcing to run were suffering from diarrhea and several had been pulled off the trail because of injuries. And Iditarod winner Brent Sass abandoned three dogs who could go no further.

2. Dogs die on and off the Iditarod trail. Death is even listed in the official rules for the race as an “unpreventable hazard” for dogs.

The leading cause of death for dogs during the race is aspiration pneumonia, caused by inhaling their own vomit. Many more have died in other horrific ways, including asphyxiation, heart attacks, trauma from being struck by a vehicle, freezing to death, and excess fluid in the lungs. In total, over 150 dogs have died during the Iditarod. Before the 2022 race even started, dogs were attacked and one was killed during training. A PETA investigation into former Iditarod winners revealed that in one incident, a dog was dragged to death after a team broke free from a sled while training. 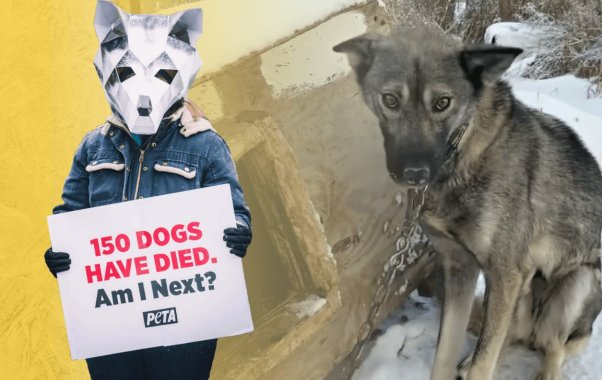 Breeders of dogs used for sledding have admitted that “surplus” dogs are killed if they’re not fast or fit enough for competition or if they don’t meet certain aesthetic standards. Dogs who finish the race but are deemed no longer useful to the industry have been shot, drowned, or abandoned to starve.

Veteran musher Zoya DeNure alleged that some trainers have killed “hundreds on top of hundreds or more dogs” because they didn’t make the cut. She called out musher Dallas Seavey’s kennels, among others, for killing dogs who aren’t fast or fit enough and wrote, “Sadly, this has been going on in the family ‘dynasty’ for decades.”

3. Even “champion” dogs may be dumped or forgotten like used sporting equipment once they’re no longer considered useful. 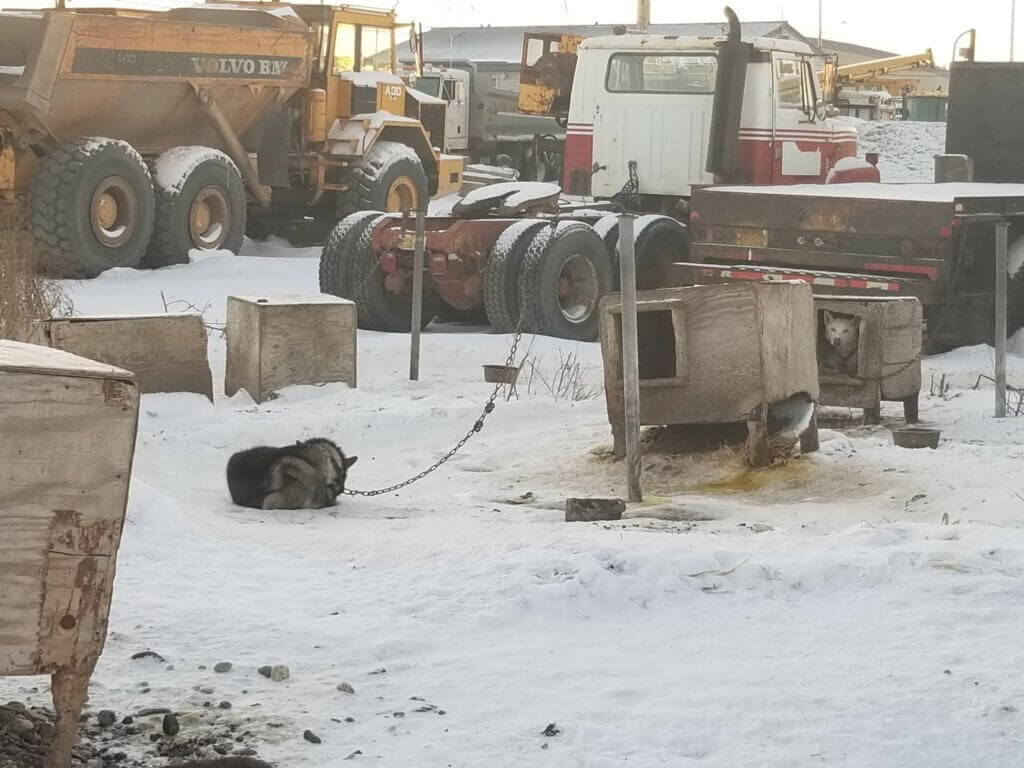 During PETA’s investigation into former champions’ kennels, musher John Baker let Snickers—a lead dog when Baker won the Iditarod—suffer in the freezing cold. Rather than providing this elderly dog with the veterinary care and comfort she desperately needed, he chained her beside the frozen sea—alone and unable to escape the Arctic cold.

She had no shelter until PETA’s eyewitness built one for her, as the wooden box next to her area was only accessible from an adjacent pen. Baker said Snickers suffered from arthritis even when she ran the Iditarod. He admitted that she had been “in a lot of pain” for years and that he needed to “put her out of her misery.” He stated that he planned to shoot her but hadn’t yet done it because “I just don’t have a good place to bury her.”

4. Dogs love to run, but those used for the Iditarod go from being forced to run about 1,000 miles in under two weeks to spending the off-season chained up outside without the opportunity to explore their surroundings, exercise and play in a meaningful way, or even socialize. 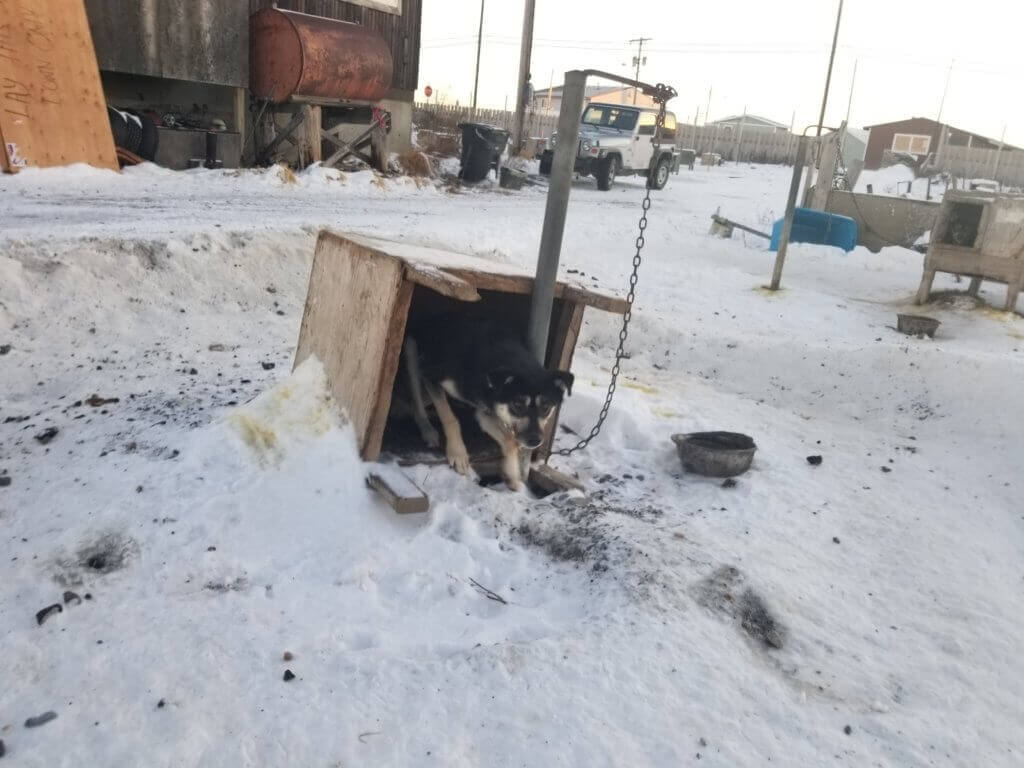 Most kennels keep dozens of dogs on short chains with little or no shelter. Between races, their world extends no farther than the end of a 6-foot tether. They’re deprived of everything dogs thrive on: exercise, play, mental stimulation, and companionship. PETA’s investigator found that dogs were denied veterinary care for painful injuries, kept constantly chained next to dilapidated boxes and plastic barrels in the bitter cold, and forced to run even when they were exhausted or dehydrated.

5. Dogs are prohibited from taking shelter during the race, even in potentially deadly weather, except for during medical exams or treatment.

In 2022, the Iditarod was hit by a massive storm with winds around 70 mph and freezing temperatures. Multiple mushers said they feared for dogs’ lives and broke the rule that prohibits sheltering the animals during the race by bringing their dogs inside cabins to protect them. The race ended in controversy over officials’ shameful decision to fine these mushers for protecting the dogs during this dangerous storm, which could have caused them to freeze to death. Meanwhile, Brent Sass, the 2022 winner, shared a disturbing video of dogs covered with snow and ice in the blistering wind and with their eyes frozen shut during the race.

Hell has frozen over and it’s called the #Iditarod. pic.twitter.com/2ZqzBrfLMG

Get Active to Help Dogs and End This Horrendous Event

These five current facts about the vile Iditarod prove how badly action is still needed. Last year, PETA and its supporters achieved a victory by persuading Millennium Hotels and Resorts—one of the event’s last major sponsors—to declare 2022 its final year of support. Most major companies have ditched the death race, but Liberty Media is stalling. Please help suffering dogs now:

Urge Liberty Media and Others to Stop Sponsoring the Iditarod