Since the early days of the COVID-19 pandemic, scientists have been trying to determine where the novel coronavirus originated and how to prevent future pandemics. In an unsurprising reveal, two recently published studies point toward the probable culprit: a live-animal market in China.

Using different approaches, both studies traced the virus back to the Huanan Seafood Wholesale Market, a “wet market” and live-animal market in Wuhan.

What Are Live-Animal Markets? 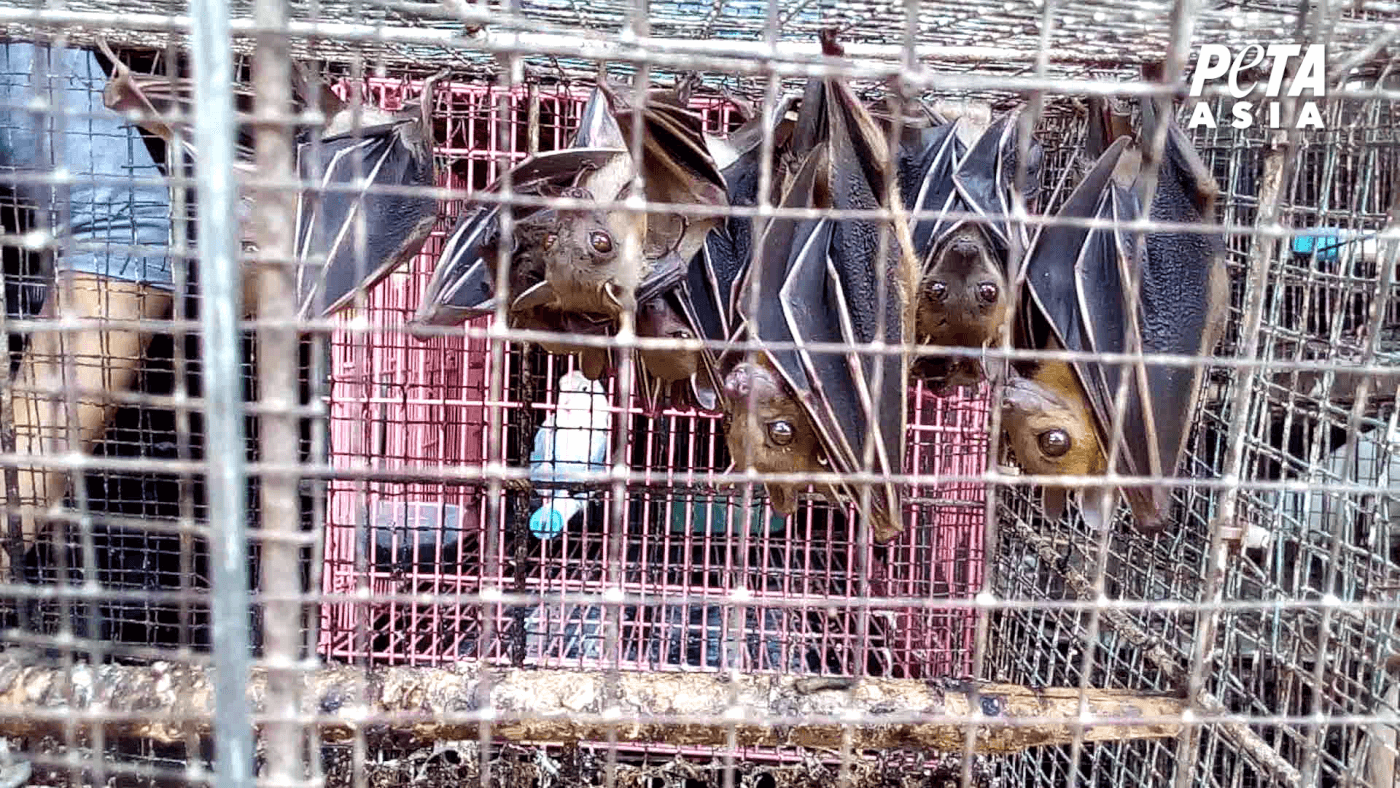 In one of the studies, researchers from around the world used mapping tools and social media reports to determine that the earliest COVID-19 cases were clustered around the Wuhan wet market. In the other study, scientists used genetic information to examine the earliest strains of the virus, which suggests that at least two variants spread directly from infected animals to humans in November or early December 2019.

Raccoon dogs—who are bred and killed in China primarily for their fur but also their flesh—may have been the first animals to transmit COVID-19 to humans after contracting the virus from bats. Traces of the virus were reportedly found in cages that housed raccoon dogs—cages that were likely stacked on top of one another and covered with urine and feces, making it easy for bacteria and diseases to spread. At live-animal markets, vendors typically slaughter raccoon dogs on demand, leaving the animals’ blood on the walls and floor.

This news comes as no shock to PETA, as live-animal markets are hotbeds for dangerous diseases. While observing nearly a dozen live-animal markets, PETA Asia investigators saw marketgoers walking around in flip-flops on floors covered with animals’ bodily fluids, humans handling raw flesh and touching blood-streaked countertops without gloves, animals with open wounds clustered together, and more.

PETA’s was the first voice publicly calling on the World Health Organization (WHO) to close wet markets, and just a few days later, more than 60 legislators did the exact same thing.

The coronavirus crisis has many world leaders, lawmakers, and health officials calling for wet markets to be shut down. Dr. Anthony Fauci—director of the National Institute of Allergy and Infectious Diseases—is one of them.

“It boggles my mind how when we have so many diseases that emanate out of that unusual human-animal interface, that we don’t just shut it down. I don’t know what else has to happen to get us to appreciate that,” Fauci said.

Elizabeth Maruma Mrema—the United Nations’ biodiversity chief—made headlines, too, after proclaiming that all countries must shut down these markets to avoid future pandemics like COVID-19.

“The message we are getting is if we don’t take care of nature, it will take care of us,” she told The Guardian.

… and other reports that blood-soaked, disease-prone wet markets are still operating in Asia as well as elsewhere in the world has Sen. Lindsey Graham disturbed, too.

“I’m going to write a letter to the World Health Organization and to the Chinese ambassador asking them to close the Chinese wet markets,” he said.

Lara Trump—President Donald Trump’s daughter-in-law and an adviser to his campaign—has called for an immediate ban on wet markets.

“It is undeniable that the risks posed by ‘wet markets’ are too great and the cruelty too severe to allow them to operate even one more day,” she said.

Jinfeng Zhou—secretary general of the China Biodiversity Conservation and Green Development Foundation—along with other officials have echoed the sentiment that a crackdown is a must, and we agree. These markets—including the more than 80 live-animal markets and slaughterhouses operating in New York City, many of them near schools, parks, and residences—must be closed down for good.

To prevent more diseases like COVID-19—which are transmitted to humans from other animals—we must do more than crack down on wet markets in just certain sections of the world. All live-animal markets must go.

Actor and longtime PETA friend Edie Falco recently wrote to New York City Mayor Bill de Blasio urging him to “take whatever action is necessary to effect the immediate and permanent closure of all live-animal markets” in the Big Apple, and you can join her:

Urge NYC Health Officials to Shut These Markets Down Now

Here at PETA, we’ve done a little letter-writing of our own. We were the first to urge WHO to shut down deadly live-animal markets around the globe. Not long afterward, Graham made good on his promise—he, Sen. Cory Booker, and more than 60 bipartisan congressional lawmakers followed in PETA’s footsteps, writing their own, similar letter to WHO urging the agency to “protect public health” by immediately closing all live-animal markets.

As we, Graham, and Booker pointed out in our letters, such markets—where stressed, injured, and sick animals are caged in public areas—are perfect breeding grounds for pathogens like the novel coronavirus.

Live-animal markets are breeding grounds for diseases like COVID-19, but what about the live-animal markets that exist here in the U.S.—or any animal agriculture operation, really? What’s the difference between these chickens at a wet market in Taiwan …

… and the ones being killed and sold at live-animal markets and slaughterhouses in New York City? How are the restaurants in Los Angeles that mutilate and serve live animals to customers any better than wet markets in Asia? Zoonotic viruses don’t originate exclusively in wet markets. The types of animals most commonly connected to viral outbreaks in humans are chickens and pigs. And the U.S. is home to countless farms where chickens are crammed together in small cages and pigs are packed in feces-ridden sheds as well as slaughterhouses where chickens and pigs are killed on floors soaked with blood, urine, and other bodily fluids. So while current events have many calling for an end to wet markets and the wildlife trade in Asia, it’s simply not enough.

To prevent pandemics like coronavirus, we must end the demand for animal flesh entirely.

It’s been widely speculated that bats (some of whom build friendships in ways similar to humans) sold for soup could be COVID-19’s origin point. But since previous influenza viruses have originated in chickens and pigs, we can’t blame bats or other wild animals for these outbreaks.

Zoonotic viruses aren’t a wet market or wildlife-trade problem—they’re a human problem. Humans’ actions toward other animals created COVID-19, and it’s up to us to shape up.

Deadly diseases like COVID-19 will keep breaking out until the world stops eating animals. If we were all vegan, COVID-19—along with SARS and MERS—likely wouldn’t exist. Plus, animals deserve better than this:

Just as we don’t want to become infected with or die of COVID-19, animals don’t want to suffer or be killed for food. Pigs, for example, just want to be left in peace to nurse their young, protect their friends, and relax in the sun (much like humans).

Bird flu, coronavirus, heart disease, salmonella … when will people realize that eating animals kills in so many ways?

Yes, wet markets should be banned. But please, ban meat, eggs, and dairy from your plate—before the next deadly zoonotic disease hits.

Let PETA Help You Avoid Meat Like the Plague

Click on the link below to join PETA, Graham, and others in urging WHO to take the connection between meat and coronavirus seriously:

WHO: Deadly Live-Animal Markets Must Close