In what will now stand as the case that future generations will look back on as the one that broke legal ground for animals, captive orcas were represented in a U.S. federal court in a lawsuit that PETA filed against SeaWorld seeking to establish that five wild-caught orcas deserved protection under the Constitution’s 13th Amendment, which prohibits slavery. U.S. District Judge Jeffrey Miller was the first judge in U.S. history to listen to arguments and give careful consideration to the idea that the definition of slavery does not exclude any species. Yesterday, Judge Miller ruled that the 13th Amendment doesn’t apply to nonhumans.

There is no question that SeaWorld enslaves animals even though the judge in this case didn’t see the 13th Amendment as the remedy to that. Women, children, and racial and ethnic minorities were once denied fundamental constitutional rights that are now self-evident, and that day will certainly come for the orcas and all the other animals enslaved for human amusement.

This historic first case for the orcas’ right to be free under the 13th Amendment is one more step toward the inevitable day when all animals will be free from enslavement for human entertainment. Judge Miller’s opinion does not change the fact that the orcas who once lived naturally, wild and free, are today kept as slaves by SeaWorld. PETA will continue to pursue every available avenue to fight for these animals.

As Harvard law professor and constitutional scholar Laurence Tribe described the unprecedented lawsuit, “Some may even be offended by the implied comparison of human slavery with the experience of non-humans who are captured in the wild and kept in conditions that are unnatural for the species. But that reaction would overlook both what we have in common with some other species and the many respects in which the Constitution is an essentially aspirational document. Its bold language and broadly expressed principles offer themselves to each generation as we struggle to define our national values in an ever-changing world. Ours is a vibrant Constitution, more than capable of warding off past evils while also speaking to circumstances in which we come to recognize that familiar principles apply in ways previously unforeseen. So it seems to me no abuse of the Constitution to invoke it on behalf of non-human animals cruelly confined for purposes of involuntary servitude.” 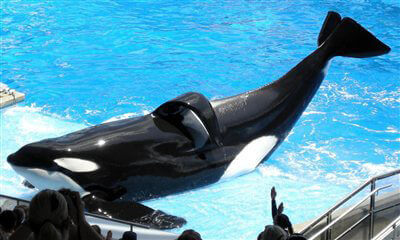 Caption: Tilikum, pictured above, has a collapsed dorsal fin,
which only occurs in captivity.
milan.bores | cc by 2.0

You can make a difference right now by refusing to buy a ticket to SeaWorld and by talking to parents and grandparents about the miserable existence that animals who live and die in barren, cramped cement tanks endure.