In the first case of its kind, PETA, three marine-mammal experts, and two former orca trainers are filing a lawsuit asking a federal court to declare that five wild-caught orcas forced to perform at SeaWorld are being held as slaves in violation of the 13th Amendment to the U.S. Constitution. The filing—the first ever seeking to apply the 13th Amendment to nonhuman animals—names the five orcas as plaintiffs and also seeks their release to their natural habitats or seaside sanctuaries.

The suit is based on the plain text of the 13th Amendment, which prohibits the condition of slavery without reference to “person” or any particular class of victim. “Slavery is slavery, and it does not depend on the species of the slave any more than it depends on gender, race, or religion,” says general counsel to PETA, Jeffrey Kerr.

“All five of these orcas were violently seized from the ocean and taken from their families as babies. They are denied freedom and everything else that is natural and important to them while kept in small concrete tanks and reduced to performing stupid tricks,” says PETA President Ingrid E. Newkirk. “The 13th Amendment prohibits slavery, and these orcas are, by definition, slaves.” 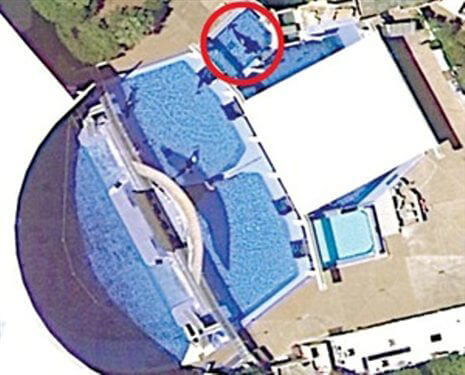 In the aerial view of SeaWorld, one can see how little room orcas have. Inside the circle is Tilikum, whose nose and tail almost touch the ends of his tank. Image © 2011 Google

Orcas are intelligent animals who, in the wild, work cooperatively, form complex relationships, communicate using distinct dialects, and swim up to 100 miles every day. At SeaWorld, they are forced to swim in circles in small, barren concrete tanks. Deprived of the opportunity to make conscious choices and to practice their cultural vocal, social, and foraging traditions, they are compelled to perform meaningless tricks for a reward of dead fish.

Our understanding of animals grows every day. Animals are no longer regarded as “things” to dominate, but as breathing, feeling beings with families, dialects, intellect, and emotions. Just as we look back with shame at a time when we enslaved other humans and viewed some people as property less deserving of protection and consideration, we will look back on our treatment of these animals with shame. The 13th Amendment exists to abolish slavery in all its forms—and this lawsuit is the next step.

The orcas are represented in the suit by what the law refers to as their “next friends”: PETA, Ric O’Barry (a former orca and dolphin trainer and the star of the Academy Award–winning documentary The Cove), renowned marine biologist and orca expert Dr. Ingrid N. Visser, Orca Network founder Howard Garrett, and former SeaWorld trainers Samantha Berg and Carol Ray.

The groundbreaking suit was filed in the U.S. District Court for the Southern District of California in San Diego.

Please help animals imprisoned by SeaWorld today. Click here to write to The Blackstone Group—the company that owns SeaWorld—and ask that it immediately set in place a firm and rapid plan to release the animals to sanctuaries that can provide them with an appropriate and more natural environment.