Update: September 4, 2020
Alliance Ground International, which handles shipments from Volga-Dnepr Airlines, a company that transports monkeys to the U.S. to be used in painful experiments, allowed a German shepherd to suffer for three days in an airport warehouse without food or water before dying. Alliance’s staff should be prosecuted for cruelty to animals for this stunningly heartless display of incompetence, the company should lose its U.S. Department of Agriculture license, and it should never again be entrusted with any animals—including monkeys torn away from their families, shoved into crates, and traumatized by a transoceanic flight. See below to find out how you can urge the company to stop handling shipments of monkeys destined for experimentation.

Update: June 23, 2020
We have just received disturbing information alleging that more than 600 monkeys destined for laboratories will be shipped to Houston on a Volga-Dnepr flight leaving Cambodia on June 23. Please immediately take action below and call the airline’s Houston office at 832-585-8611 to tell it to come clean!

Update: June 4, 2020
We’ve obtained copies of official government documents showing Volga-Dnepr Airlines’ concrete plans to transport monkeys to laboratories. In April alone, the company applied for four special permits to transport a total of 2,736 monkeys from China and Cambodia to the U.S. for one huge laboratory conglomerate. For each flight, the company requested permission to carry 684 monkeys crammed together into 184 cramped crates and strapped down to shipping pallets. The Volga-Dnepr Airlines flight we told you about earlier this week matches the details of one of the flights that the airline applied to transport monkeys aboard.

Despite the mounting evidence against it, the company still refuses to answer our questions about its policy and plans to transport monkeys to laboratories. Please immediately take action below and tell it to come clean!

Update: June 1, 2020
We’ve received information that a Volga-Dnepr Airlines flight allegedly transporting more than 600 monkeys destined for laboratories arrived in Chicago this morning, and the company is reportedly planning to fly many more monkeys slated for experimentation. Please immediately take action below to help stop this!

Update: May 28, 2020
We have just received disturbing information alleging that more than 600 monkeys destined for laboratories will be shipped to Chicago on a Volga-Dnepr flight leaving Cambodia on May 29. Please take action below right away. Then, let your voice be heard on its Instagram, Facebook, and Twitter pages. Please don’t skip these important steps.

We’ve received disturbing reports that the Russian airline Volga-Dnepr Airlines, under its parent company Volga-Dnepr Group, allegedly transported a shipment of monkeys for use in laboratories in the U.S. and may be planning to do it again.

Insiders allegedly at Ted Stevens Anchorage International Airport reported that Volga-Dnepr Airlines transported a shipment of live monkeys from Cambodia to the U.S., where they will be sent to laboratories and used for cruel and deadly experiments. We confirmed that the airline did indeed operate flight VI3236, which departed Phnom Penh International Airport in Cambodia on April 30, 2020, and arrived at George Bush Intercontinental/Houston Airport in the U.S. on May 1, 2020, after making two stops—at Khabarovsk Novy Airport in Russia and Ted Stevens Anchorage International Airport. We were told that the cargo on board this flight was live monkeys destined for experimentation. 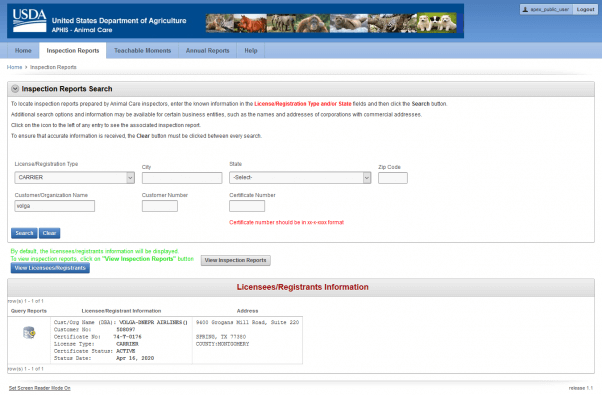 This federal government website proves that the airline has recently received a license to transport live animals into the U.S. as cargo, a worrying development that makes the need for Volga-Dnepr to come clean about any plans to transport monkeys even more imperative.

We contacted Volga-Dnepr Airlines executive team and global offices multiple times, but they are refusing to answer our questions about transporting monkeys for experimentation.

Volga-Dnepr Airlines: Come clean! Are you transporting monkeys to laboratories? 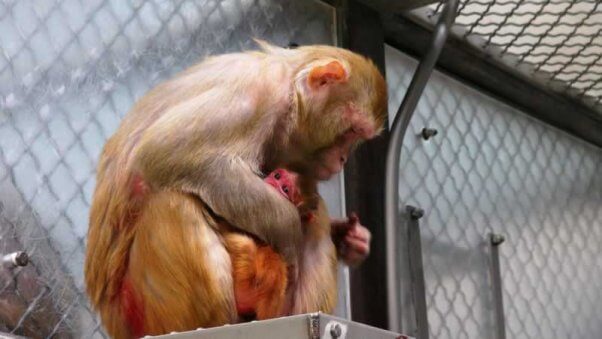 Just two years ago, PETA celebrated the end of a successful campaign against another airline owned by the Volga-Dnepr Group, AirBridgeCargo, which we exposed in 2016 for transporting monkeys for experimentation. After thousands of calls and e-mails from members of the public, the airline announced a permanent ban on transporting monkeys to laboratories and affirmed this ban to us in 2019. But it may be that another airline owned by the Volga-Dnepr Group is getting into the cruel trade in primates for experimentation.

Every year, thousands of monkeys are transported from countries such as Cambodia, China, and Vietnam to the U.S. to be imprisoned in laboratories and tormented in experiments. Some are bred in captivity on cramped, squalid factory farms, while others are taken from their families in nature. The traumatized monkeys are crammed into small wooden crates and transported in the dark and terrifying cargo holds of planes for as long as 30 hours. 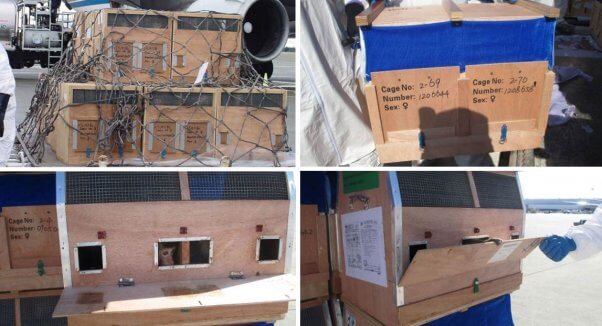 Once they arrive in the U.S., they are offloaded from the planes by cargo-handling agents and are left trapped in the cramped wooden crates (often filled with feces and urine) on the tarmac or loaded with forklifts into a warehouse. These sensitive monkeys must then wait in fear until they’re loaded into trucks and transported to infamous facilities such as Charles River Laboratories and Covance where more horrors await. They’re imprisoned in cramped cages and often cut open, poisoned, crippled, addicted to drugs, shocked, and killed. 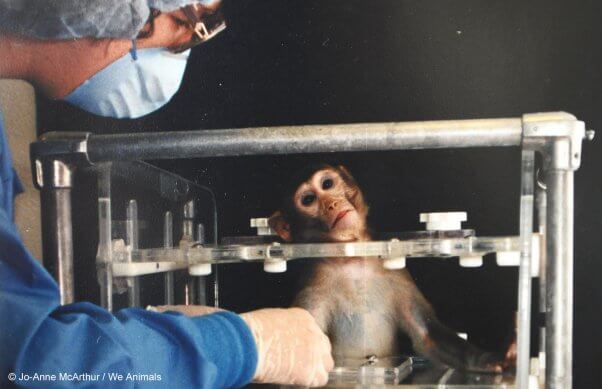 The monkeys used in these cruel experiments have complex emotional and social needs that can’t be met in a laboratory. In nature, macaque troops vary in size from about 10 to more than 60 members. The troop splits into subgroups to forage throughout the day, but each night, they all meet up at a favored “sleeping tree,” where everyone cuddles together for warmth, friendship, and protection. 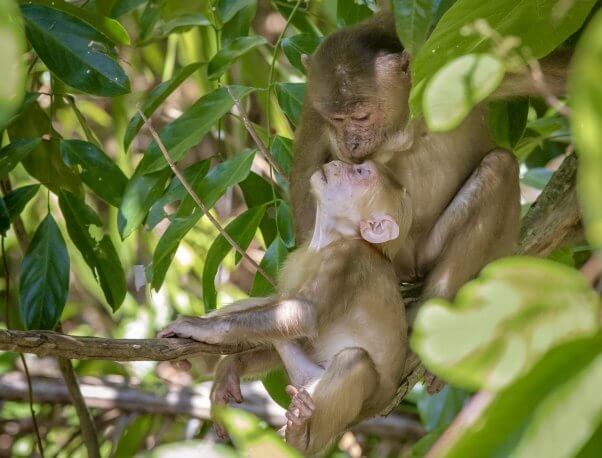