Update (August 8, 2022): Victory! A senior official from EGYPTAIR has just sent an e-mail to PETA U.S. announcing that in view of the airline’s support of “the vision and mission” of animal protection organizations, it will no longer transport monkeys to laboratories. EGYPTAIR’s announcement follows three months of vigorous campaigning by PETA entities worldwide, including protests in Frankfurt, London, Manila, New York City, Paris, and Washington, D.C. Other organizations, including Action for Primates in the U.K., Stop Camarles in Spain, and One Voice in France, also campaigned to end the shipments.

PETA entities coordinated dozens of actions in which our supporters flooded EGYPTAIR with more than 100,000 e-mails and hundreds of telephone calls asking it to stop shipping monkeys to laboratories, where they would be tormented and killed in experiments. An esteemed Cairo-based surgeon sent a letter on behalf of PETA U.S. to the airline, imploring the company to “show that Egypt is on the side of conservation and compassion.” We also ran online advertisements and coordinated communications to EGYPTAIR’s pilots, flight attendants, and cargo employees. Most recently, we e-mailed EGYPTAIR’s officials to share that the International Union for Conservation of Nature, the world’s most comprehensive information source on the global conservation status of animals, had upped the classification of long-tailed macaques from “vulnerable” to “endangered”—and that by participating in the international monkey trade, EGYPTAIR was unwittingly driving them toward extinction.

Now let’s get Spain’s Wamos Air to follow in EGYPTAIR’s compassionate footsteps. Tell the airline that monkeys are not cargo.

Thanks to the efforts of PETA, other animal protection organizations, and caring people around the globe, nearly every major airline in the world has stopped transporting monkeys to laboratories. Now, it’s time for us to use our collective voices again to let EGYPTAIR know that it has made a very bad business decision by getting involved in the cruel trade in primates for experimentation. We recently received information that 720 long-tailed macaques who’d been torn away from their families in Cambodia were transported to John F. Kennedy International Airport (JFK) in New York on April 30, 2022. 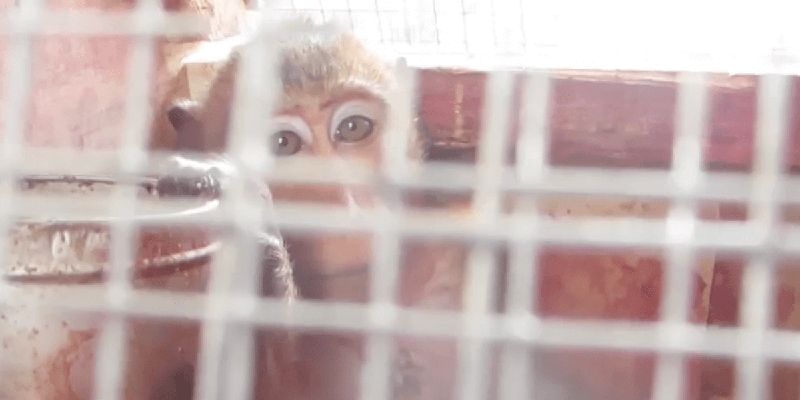 Last year, the U.S. Department of Agriculture cited EGYPTAIR for poor handling and inadequate ventilation and enclosures after a kitten being transported as checked baggage from Cairo to JFK arrived dead. The crate holding the kitten had been covered in solid plastic wrap, preventing airflow. She had not been given any food or water for the 11-hour flight, and her legs, chest, and muzzle were covered with urine. Since March 2022, EGYPTAIR has transported as many as 5,000 macaques to the U.S.—we don’t know whether they all survived and can only imagine the conditions they endured.

Every year, tens of thousands of monkeys are transported to the U.S. to be imprisoned in laboratories and tormented in experiments that consistently fail to lead to meaningful scientific advances. These highly social and sensitive individuals are either captured in nature or bred in captivity on squalid factory farms, where many die from injury and disease even before they’re crammed into small wooden crates and confined to dark, terrifying cargo holds of planes for shipment around the globe. 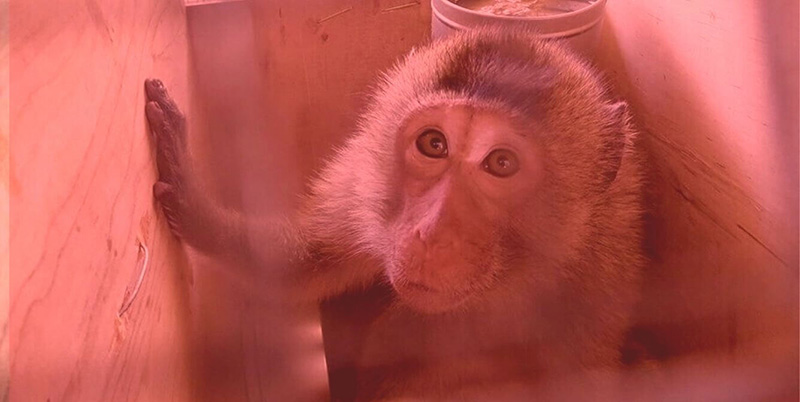 The EGYPTAIR flight landed at JFK in the wee hours of the morning. The monkeys would have been traveling on planes for more than 30 hours. The torturous and deadly journey didn’t stop in New York—the no doubt terrified animals were apparently loaded into trucks and driven to quarantine facilities in Texas.

The incentive for airlines to stop shipping monkeys to laboratories is even clearer now, after a truck transporting 100 long-tailed macaques—who had been flown by Kenya Airways from Mauritius to JFK—collided with another vehicle earlier this year. Dozens of wooden crates holding the cold and scared monkeys were thrown from the truck onto a Pennsylvania highway. Several escaped, and authorities confirmed that three were shot dead. Several people who stopped to survey the scene of the accident interacted with the monkeys, and at least one reported symptoms of illness afterward. Given the panoply of pathogens carried by macaques that can be transmitted to humans, it’s clear that the international transport of monkeys is not only a serious ethical issue but also a grave threat to public health and safety—including for passengers and crewmembers on these flights. After PETA contacted Kenya Airways with this information, it committed to stop shipping monkeys from Mauritius to the U.S.

We privately urged EGYPTAIR to follow Kenya Airways’ lead by ending this practice, but so far, the airline has failed to respond to us. We need your help!