Update (January 28, 2022): Victory! After we received reports that Kenya Airways flew to the U.S. the monkeys involved in the Pennsylvania truck crash that left 100 terrified animals possibly injured (details below) before they were carted off to their deaths in a lab, we rushed a letter to the airline’s CEO and chair of the board, urging them to end its involvement in this sordid trade.

The chair quickly responded with a commitment to ending this practice after the airline’s contract expires next month.

“[T]he current contract for the transport of the Macaques (captive bred for export) will not be renewed when it expires at the end of February.”

PETA thanks Joseph and is relieved and happy that Kenya Airways is washing its hands of this bloody business, which not only torments animals but also risks exposing the public to dangerous pathogens.

Now please take action by writing to Wamos Air and asking that it not send monkeys to laboratories or be involved in this cruel industry in any other way.

Update (January 24, 2022): PETA has obtained eyewitness information that a woman at the scene of last week’s truck crash—in which crates containing 100 monkeys who were being transported to a laboratory flew onto the road—got an eyeful of monkey saliva. Her eye is weepy and infected, and she has developed a cough. She’s now on both antiviral drugs and medication to protect against rabies.

When crates of monkeys are flown into the U.S., they’re unloaded by workers in full-body personal protective equipment because the risk of disease transmission is so great. But none of the people who waded through the terrified monkeys’ feces and urine smeared across the highway wore so much as a face mask. The Centers for Disease Control and Prevention should be scrambling to ensure that numerous other people who were at the scene aren’t in danger.

While herpes B has not been found in monkeys from Mauritius—where these primates are from—studies show that no one has looked for it recently, either. And monkeys may harbor a number of unknown viruses. 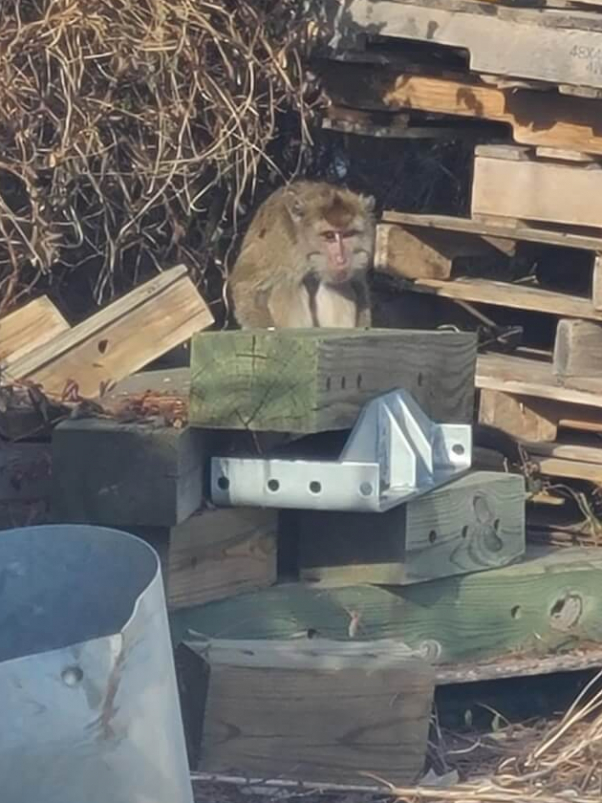 The monkeys, some likely injured and all surely terrified, remained on the highway in subfreezing temperatures for hours without any protection or veterinary care as onlookers peered into the crates, some attempting to upright them. The U.S. Department of Agriculture is now investigating, in response to a complaint filed by PETA.

Importing monkeys for experimentation is carried out with almost no oversight. Monkeys arrive by plane from Asia or Africa after enduring sometimes days-long trips as they sit in their own urine and feces. Then they’re trucked to undisclosed quarantine sites before being sent to laboratories across the country. If monkeys develop bloody diarrhea or other symptoms after their quarantine period, PETA has learned that no officials are informed and no one seems to care.

For the safety of animals and humans, the U.S. must stop pretending that experiments on monkeys are useful and stop importing them.

In our complaint, we point to these possible violations:

This tragic incident is one more reason why PETA is calling for the closure of the federally funded national primate research centers. Take action here to help make that happen.

A curious onlooker of a vehicular accident on a Pennsylvania highway got the shock of a lifetime when she approached a crate that she believed held a cat, cooing, “Kitty, kitty.” Instead, she found a monkey looking back at her. She had no idea that she may have been risking her life. One of the vehicles involved in the wreck was carrying 100 long-tailed macaque monkeys on their way to a quarantine facility in Florida. When the wreck occurred, four monkeys escaped—and one is still missing. The other three have had their first and last taste of freedom and the opportunity to climb trees.

SHE SAW THE MONKEYS: One monkey is still on the loose in the Danville area after four escaped from a truck carrying lab monkeys. Michele Fallon saw the wreck unfold. She says people first thought the truck was full of cats! @WNEP pic.twitter.com/9n8XUkm1J7

Infected Monkeys—This Is How Pandemics Start

The monkeys had just arrived in New York from what is likely a squalid breeding farm in Mauritius. They had not been quarantined, and their health status was unknown. Monkeys can carry lethal pathogens that spread through their saliva, blood, feces, and urine. Photos taken at the site of the Pennsylvania monkey crash reveal a worrying lack of biosecurity—people dragging boxes barehanded, motorists sticking their faces into crates, and of course, the escaped, likely terrified and disoriented monkeys who were thrown out into freezing cold weather and will likely die from their injuries and/or exposure or be killed.

New pictures of the monkeys police and game commission are trying to round up after a crash involving a truck they were in this afternoon in Danville, PA . we are told the 100 monkeys were being taken to a lab before the crash. 4 are still loose tonight. @CBS21NEWS pic.twitter.com/VqCOr3qYJ1

The Risk is Taken Every Day In the U.S.

Because these 100 long-tailed macaque monkeys were headed to a laboratory to be caged, tormented, and killed, they were already in danger—but now the public is, too. The four who got away—including one who is still missing—are undoubtedly terrified and likely injured, and they may be harboring viruses that are transmissible to humans. There is no way to ensure that monkeys are virus-free, and state veterinary and other records uncovered by PETA show that monkeys in laboratories in the U.S. have been found with tuberculosis, Chagas disease, cholera, and MRSA. The only way to ensure that pathogens don’t jump from monkeys to humans is to stop importing, caging, and experimenting on these animals. A 2020 pathology report uncovered by PETA shows that shortly after clearing Centers for Disease Control quarantine, one monkey from Mauritius arrived at the University of Washington infected with giardia and campylobacter. Approximately two months later, before being used in an experiment, the monkey developed bloody diarrhea of unknown origin. The young longtailed macaque was eventually killed when he became too sick.

This monkey crash is not the first time monkeys have posed a health risk to the public. In 1989, monkeys infected with an unknown strain of the Ebola virus landed at a facility owned by Hazleton Laboratories (later known as Covance and now Envigo) in Reston, VA. Four people became ill before all the monkeys were killed and the lab shut down. It happened again in 1996, that time in Texas. Shipping monkeys and other animals to torment and ultimately kill them is dangerous—for everyone. But that hasn’t stopped companies that experiment on animals from continuing to engage in the practice.

Every year, thousands of monkeys are transported to and around the U.S. to be imprisoned in laboratories and tormented in experiments in which they’re often cut open, poisoned, crippled, forced to become addicted to drugs, shocked, and killed. These sensitive individuals are bred in captivity on filthy factory-like farms in Africa and Asia.

This Monkey Crash Should Never Have Happened

The industry that claims to be developing vaccines and treatments for human diseases not only fails to deliver results from animal-based experimentation, but also cruelly abuses and wastes the lives of sensitive monkeys and poses health risks to the general public by failing to safely contain the animals they use.

PETA is calling on the Centers for Disease and Control and Prevention (CDC) to stop allowing the importation of monkeys for laboratory experimentation. Please join our call: