Update (August 8, 2022): Victory! A senior official from EGYPTAIR has just sent an e-mail to PETA U.S. announcing that in view of the airline’s support of “the vision and mission” of animal protection organizations, it will no longer transport monkeys to laboratories. EGYPTAIR’s announcement follows three months of vigorous campaigning by PETA entities worldwide. Read more here.

Every year, thousands of terrified, disoriented monkeys are crammed into crates and loaded into the pitch-black cargo holds of EGYPTAIR planes to be transported to laboratories around the globe. Once there, they’ll be mutilated, poisoned, deprived of food and water, forcibly immobilized in restraint devices, infected with painful and deadly diseases, psychologically tormented, and killed.

EGYPTAIR is one of the last remaining major airlines to continue to transport monkeys for the barbaric primate experimentation industry. It refuses to stop, despite the failure of the enterprise to lead to cures and treatments for humans. PETA is waging a campaign to convince EGYPTAIR that cruelty doesn’t fly—and you can help.

Just days after the International Union for Conservation of Nature announced that the conservation status of long-tailed and pig-tailed macaques had changed from “vulnerable” to “endangered,” PETA activists gathered at Charles de Gaulle Airport in France to protest EGYPTAIR’s continued participation in the cruel primate trade. PETA France created an Instagram reel for the occasion, further increasing the reach of this demonstration and amping up pressure on the airline. 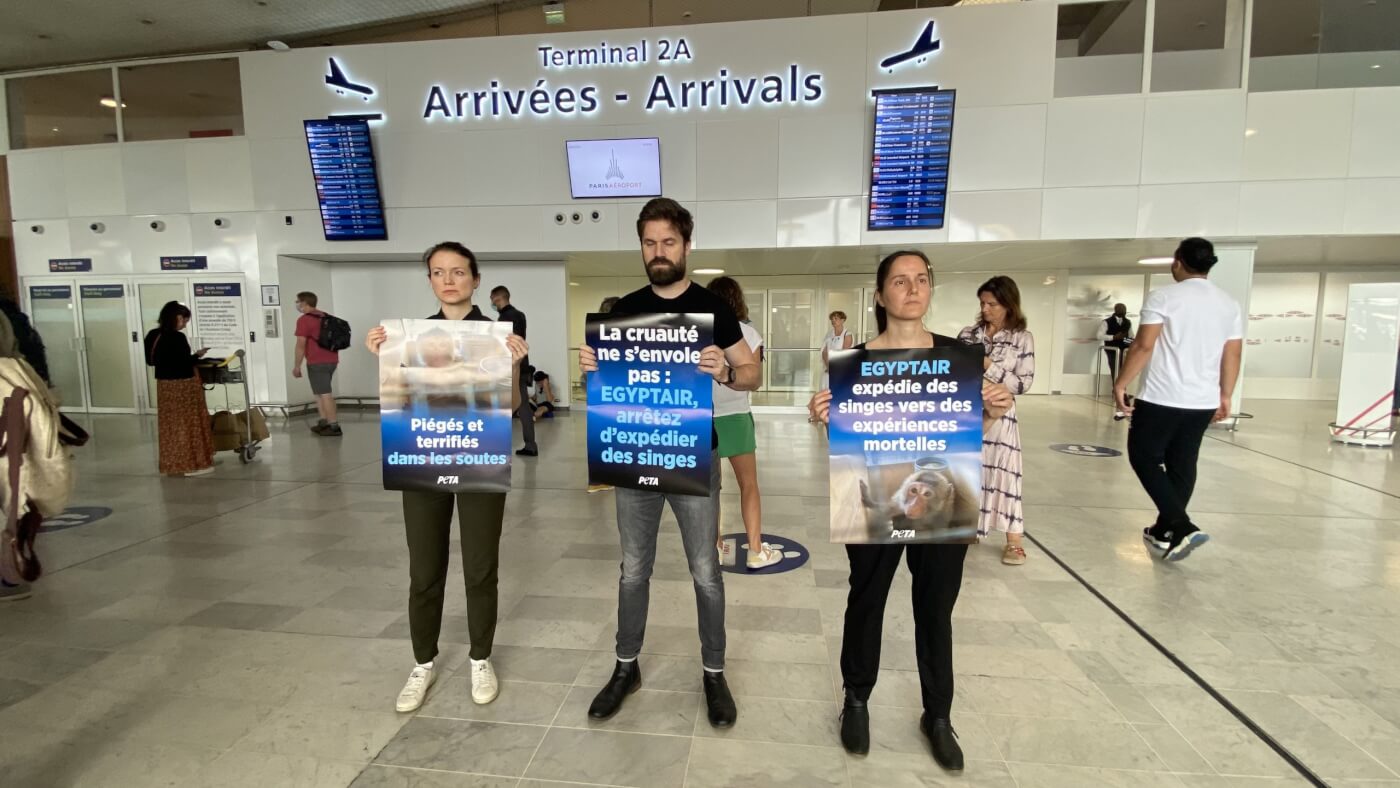 Demonstrators took to the streets outside the Egyptian Embassy in Manila, Philippines, to let folks know that EGYPTAIR continues to ship monkeys to laboratories, where they’ll be tormented and killed. People around the globe continue to protest the airline, and we won’t stop until it stops transporting monkeys to labs! 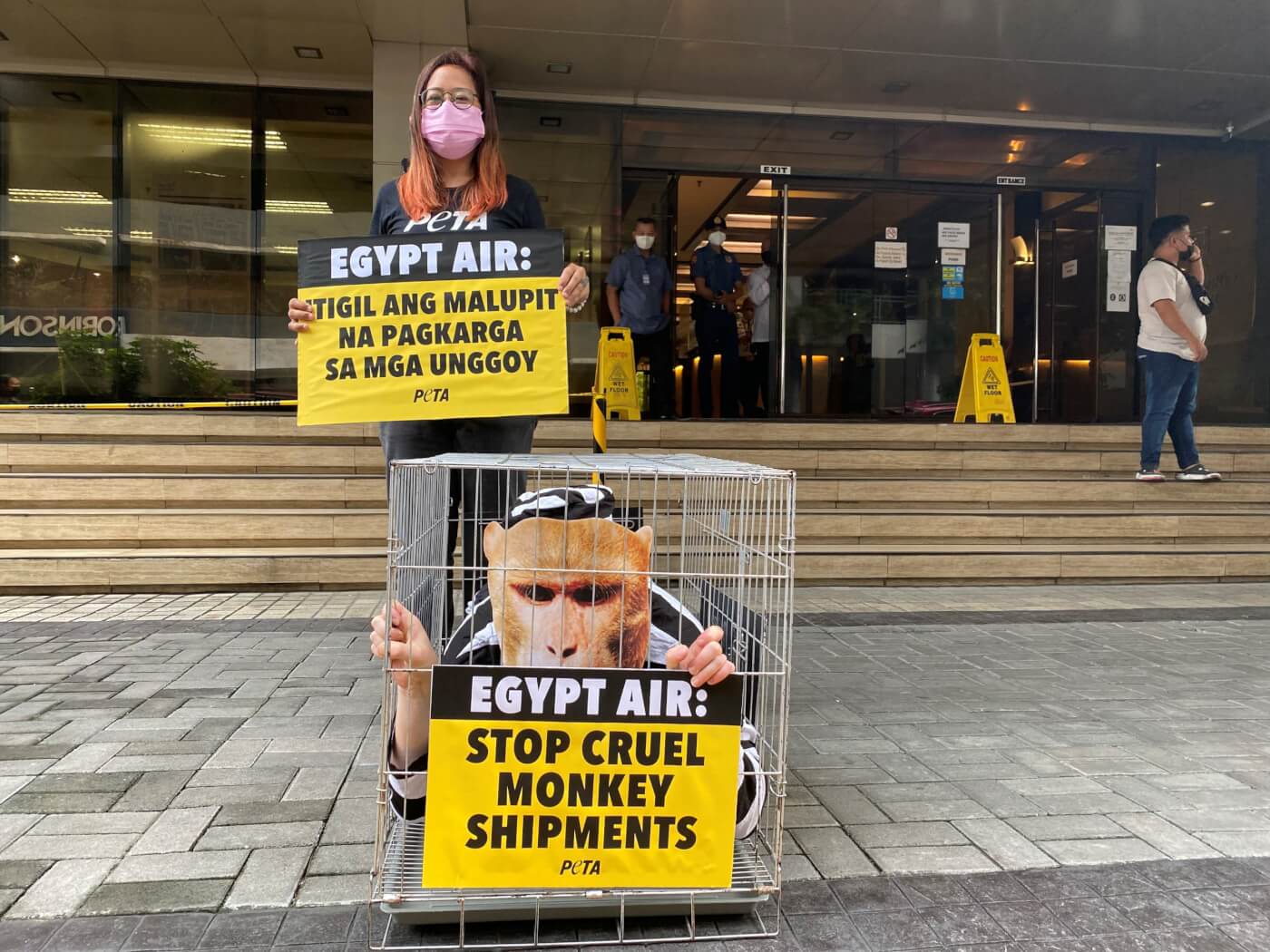 PETA’s striking monkey mascot led supporters to the EGYPTAIR terminal at Dulles International Airport, just as passengers for a flight to Cairo were arriving. PETA President Ingrid Newkirk handed out leaflets to the passengers who’d queued up at the ticket counter, while activists congregated just outside of the terminal with signs that read, “EGYPTAIR Ships Monkeys for Deadly Experiments.” 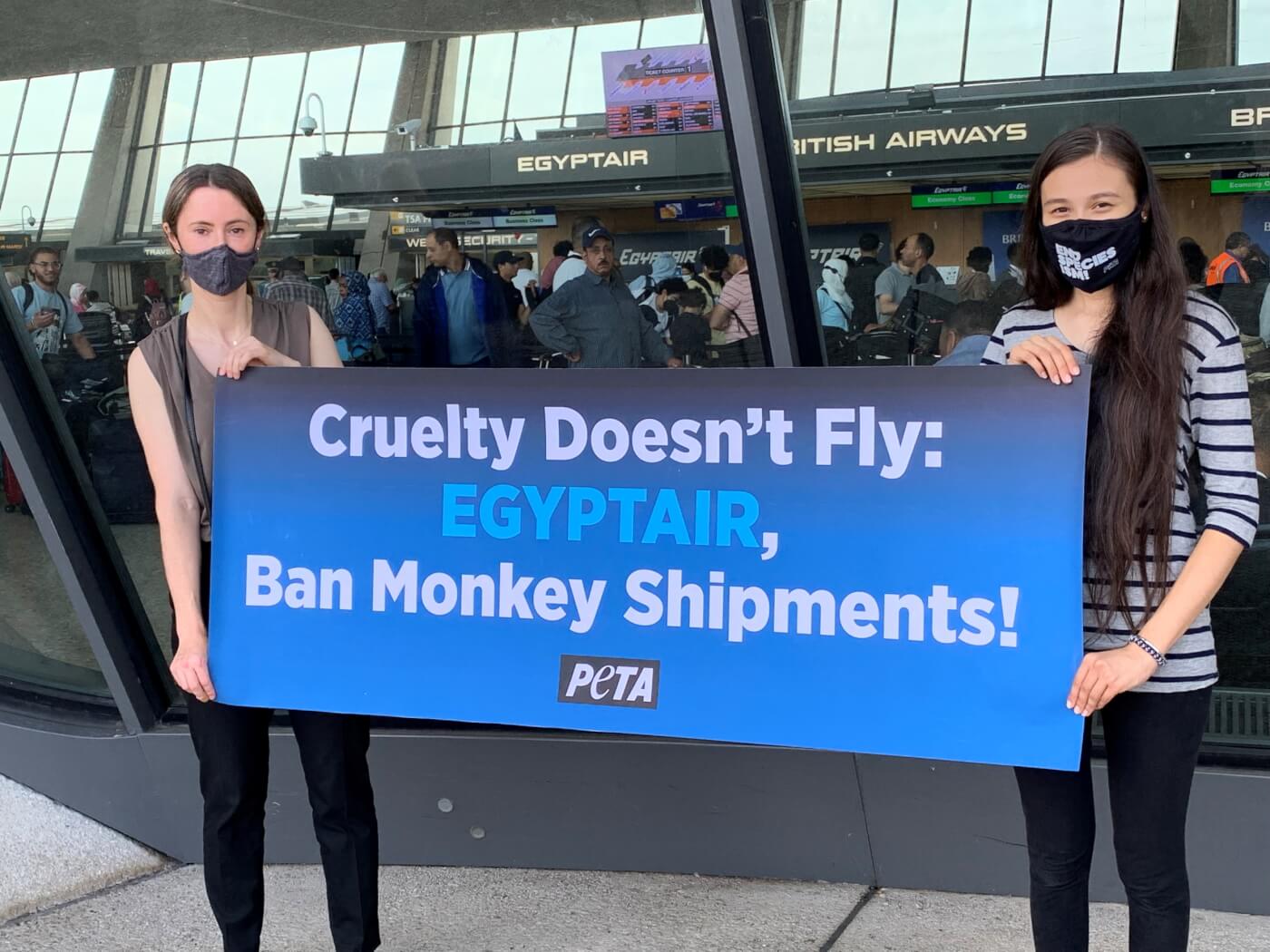 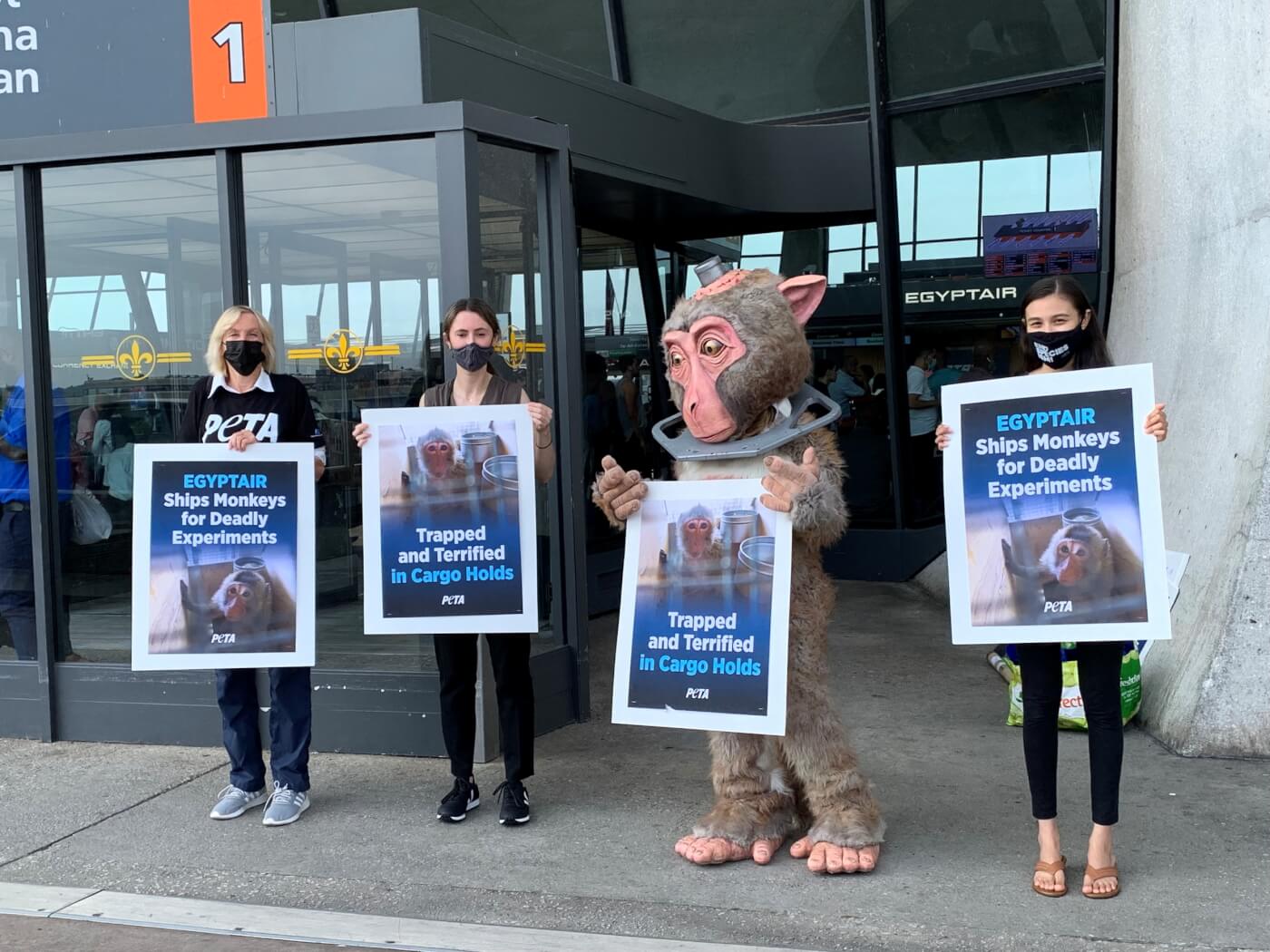 EGYPTAIR executives in the U.S. & Egypt will be in for a surprise when they look on their front doorstep and find PETA’s T-shirts & coffee mugs imploring them to stop monkey shipments. Every time EGYPTAIR’s CEO reaches for his morning cup of coffee, he’ll be reminded of the monkeys trapped in cramped crates on EGYPTAIR’s cargo flights. 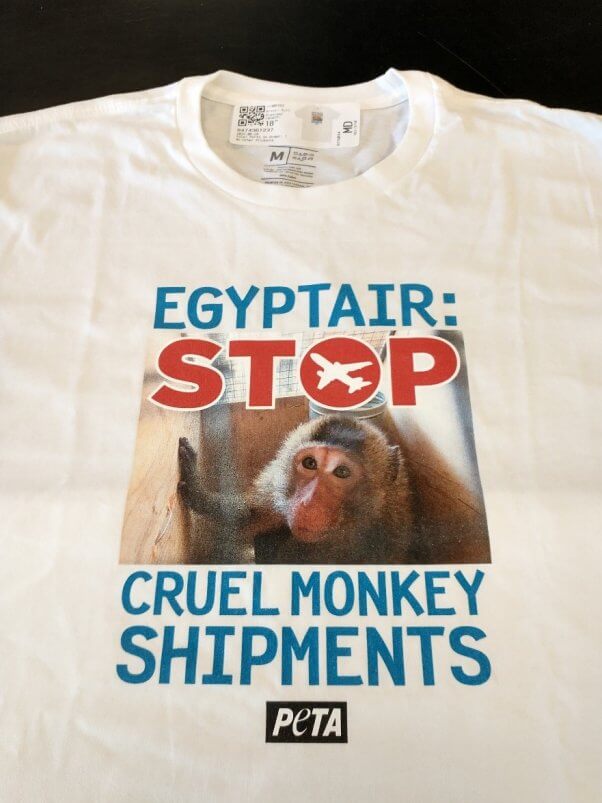 ‘Monkey’ Swoops Into Frankfurt Airport to Share Plane Truth: ‘Primates Are Not Cargo!’

A larger-than-life “monkey” mascot joined PETA supporters at Frankfurt Airport in Germany to demand that EGYPTAIR stop transporting fellow primates to their deaths in laboratories. 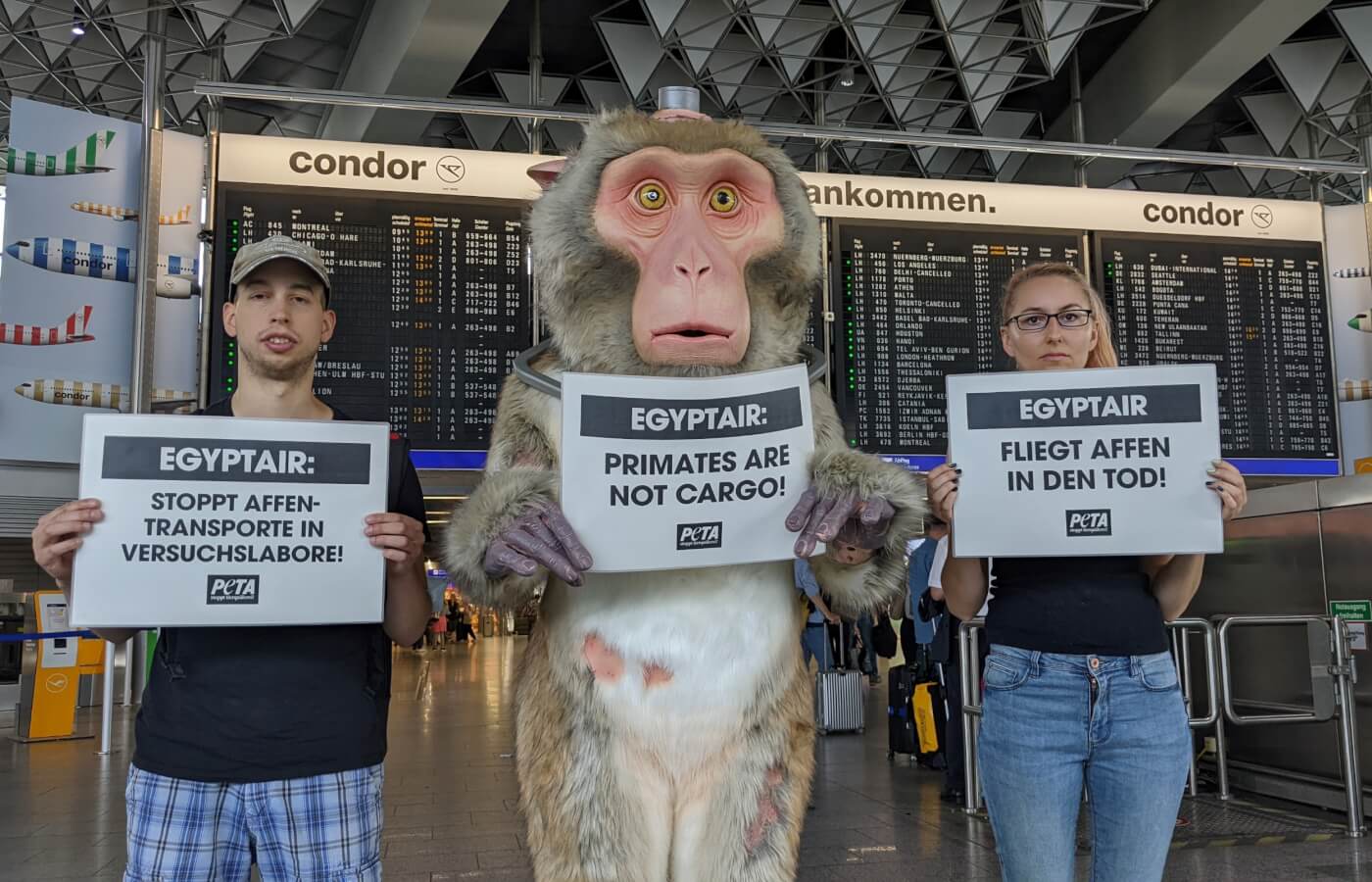 London Calling: PETA Supporters Cause a Hubbub at Heathrow in Defense of Monkeys

PETA Takes to Facebook to Warn Travelers of EGYPTAIR Cruelty

More than 736,000 people saw PETA’s Facebook ad, cautioning would-be flyers: “Don’t Fly While Primates Die. EGYPTAIR Ships Monkeys to Their Deaths in Laboratories.” That’s enough to fill the U.S.’s largest football stadium almost 7 times over! Many thousands of people all over the world now know not to fly EGYPTAIR until the company stops this cruel practice. 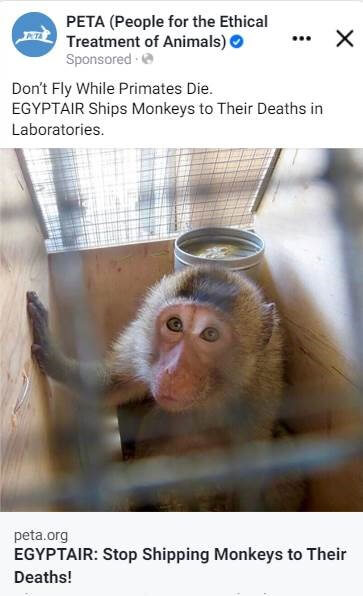 Dr. Abdelhakim Elkholy, a Cairo-based surgeon and the director of the Egyptian Life Support Training Center, added his compassionate voice to ours. He leads Egypt’s national Advanced Trauma Life Support program—which, thanks to a collaboration with PETA, now trains doctors using superior TraumaMan simulators instead of animals. He recently wrote the following to EGYPTAIR officials:

EGYPTAIR Cargo is shipping hundreds of long-tailed macaques to the U.S., where they are doomed to pain, suffering, and death in laboratories. These monkeys suffer tremendously before, during, and after these flights. … As the national flagship airline of Egypt, EGYPTAIR represents our country. Please, show that Egypt is on the side of conservation and compassion, and help encourage EGYPTAIR Holding Company to reconsider participating in these cruel monkey shipments.

Turmoil in the Terminal! PETA Supporters Converge at JFK Airport for Passionate Protest

A crowd of chanting PETA supporters couldn’t be missed as they unfurled a large banner outside the EGYPTAIR departures area at John F. Kennedy International Airport, calling on the airline to ban shipments of monkeys. The pack of primate defenders later took their reality check to EGYPTAIR’s check-in counter, where long lines of people awaiting the next step in their travels absorbed the message. The peaceful protest coincided with reports that a shipment of hundreds of laboratory-bound monkeys was en route from Cambodia. 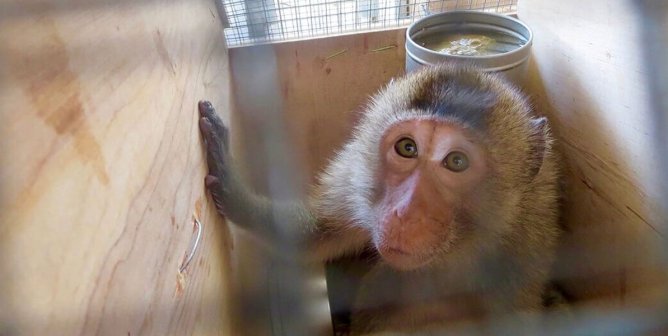 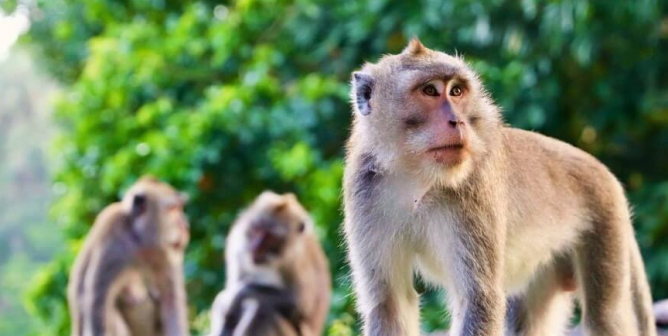 The Danger on Our Highways: Transport of Lab-Bound Monkeys